“Berlin has made the most unfavourable impression on me.” It is 1898 and Rosa Luxemburg has just arrived in the capital of the German Empire. She describes it in a letter as: “cold, tasteless, massive – a real barracks.” She will remain in Berlin until her assassination, which took place 101 years ago today. Here is where she spent her time in Berlin. 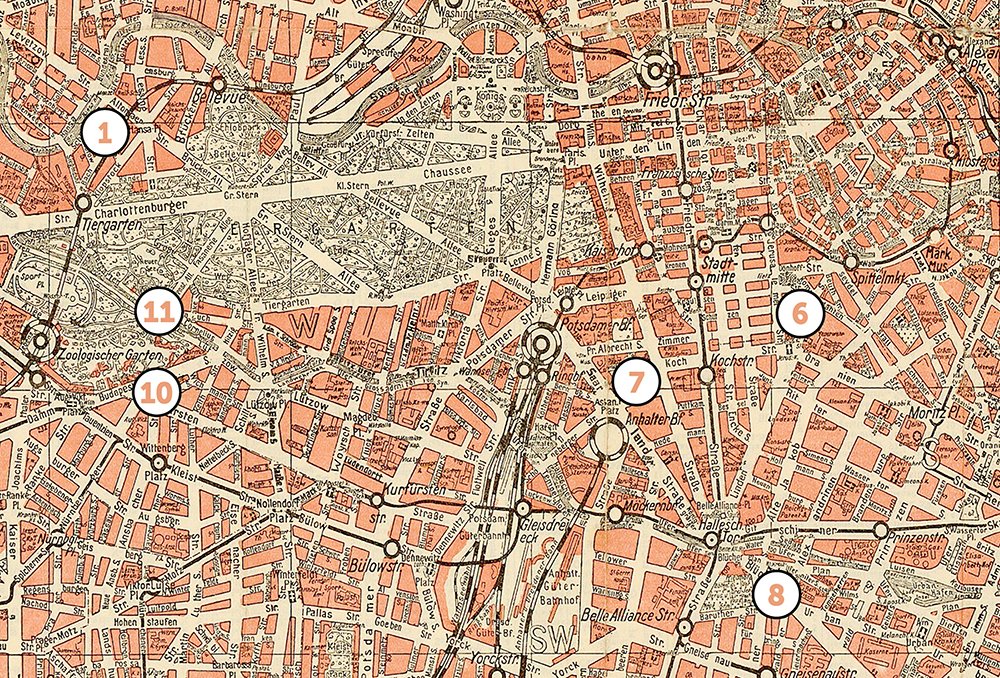 “Berlin has made the most unfavourable impression on me.” It is 1898 and Rosa Luxemburg has just arrived in the capital of the German Empire. She describes it in a letter as: “cold, tasteless, massive – a real barracks; and the dear Prussians with their arrogance, as though every one of them had swallowed the cane with which one had once been beaten…” Fair to say it isn’t love at first sight, but Luxemburg stays here until the bitter end.

When she moves into her first Berlin home in the Hansaviertel, Luxemburg is 27. She’s just received German citizenship thanks to her marriage to a German acquaintance and a doctorate in economics from the University of Zurich (the only university open to women in the German-speaking world). She also has quite an activist past behind her: she’s been an active member of a Warsaw Marxist organization since age 15, and was an electoral agitator among Polish-speaking workers in Prussian controlled Silesia. She immediately joins the SPD, Germany’s (then radical) Social Democratic Party.

In 1899, Luxemburg moves to Friedenau, first to Wielandstraße 23 and three years later, a few blocks east, to Cranachstraße 58, to be closer to her dear friends Karl and Luise Kautsky who live at Saarstraße 14. Friedenau is a socialist hotbed, where the stars of the socialist movement meet on Sundays at the Kautsky’s to drink coffee and argue. The lead theoretician of the SPD is known around the world as the “Pope of Marxism.” For years, Luxemburg is his sharp-tongued ally in the fight against the party’s “revisionist” right-wing. The two have a falling out around 1910: Luxemburg believed the party should organize mass strikes in order to win voting rights for all in Prussia; Kautsky felt this was too risky. They never spoke again – but Luxemburg remains close to Luise Kautsky. In the 1980s, a brothel opened on Cranachstraße 58 with the name “Rosa L.” Someone threw a brick through the window and the owner changed the name.

In 1911 Luxemburg moves to the peace and quiet of “Südende” in Steglitz, and resides at Lindener Straße 2, where she writes her magnum opus: The Accumulation of Capital: A Contribution to the Economic Explanation of Imperialism.

In 1907, Luxemburg begins to work as an economics teacher at the SPD’s party school. Classes are held at the HQ of the SPD newspaper, Vorwärts, a massive complex just west of the Belle-Alliance-Platz (today: Mehringplatz). Her students include Friedrich Ebert, later the first president of the Weimar Republic, and Wilhelm Pieck, the first president of the German Democratic Republic.

Shocked to see the SPD support it, she starts organizing the anti-war left – but on February 18, 1915, she is sent to jail at the Berlin Women’s Prison in Friedrichshain for a pacifist speech she held in Frankfurt before the outbreak of the war. In 1913, she had declared: “If we are called on to raise murder weapons against our French or other foreign brothers, then we will declare: no, we refuse!” After her 14 months are up, she’s put into “protective custody” (i.e. without a trial) in prisons in Poznan and Wroclaw. Although stuck in a cell until the end of the war, she’s able to write the revolutionary “Spartacus Letters.” Circulated illegally, they reach millions of workers.

On November 9, 1918, Berlin workers topple the Kaiser. Luxemburg is released from prison, but only reaches Berlin the following day. On the evening of the insurrection, a group of Spartacists head to the Scherl Publishing House on Zimmerstraße, the HQ of the Berliner Lokal-Anzeiger – a high-circulation nationalistic paper comparable to today’s BILD (ironically, the block where Scherl used to be housed is now the home of the Springer publishing conglomerate). For two days, the Spartacists take over the press to publish their own paper, Die Rote Fahne (“The Red Flag”) – before being kicked out by armed counter-revolutionaries and moving to a printshop on Königgrätzer Straße at the corner of Möckernstraße, where Luxemburg works, eats and sleeps at her desk, for the duration of the revolution.

On December 31, 1918, Luxemburg and her friends meet in the ballroom above the entrance to the Prussian Landtag parliament (now the Berlin city parliament or the Abgeordnetenhaus). Here, 87 delegates found the Communist Party of Germany or KPD. Their mission: drive the revolution forward.

Just a few days after the KPD is founded, up to one million Berlin workers take to the streets to get rid of the provisional government. But the newly elected and first president of the Weimar Republic, SPD head Friedrich Ebert (Luxemburg’s former student) betrays the revolution and his former allies, using the Freikorps paramilitaries to crush the rebellion: the SPD’s Vorwärts building is attacked by artillery and machine guns, and many of the occupiers are executed. On January 11, Luxemburg and her closest collaborator, Karl Liebknecht, go into hiding at Dr. Alfred Bernstein’s house, Blücherstraße 13 – just a few blocks from the street battles. (Bernstein, a Social Democratic doctor, is best remembered for his idea that working women should go on a “birth strike” to fight capitalism. Luxemburg thought it was a stupid idea.)

After one night, Luxemburg and Liebknecht move to a new hiding place, first in the workers’ district of Neukölln (address unknown), then in the more bourgeois Wilmersdorf, at the home of independent socialist Siegfried Marcusson. Here, at Mannheimer Straße 43, Liebknecht and Luxemburg are discovered and taken away by the Bürgerwehr (citizens’ militia) on January 15.

The two prisoners are brought to the elegant Hotel Eden, where the Freikorps have their headquarters. Luxemburg is dragged from the hotel into a car and beaten to death with rifle butts. Officially she was “dragged away by a crowd and never seen again.” Contacted by Freikorps commander Waldemar Pabst looking for support, President Ebert and his War Minister washed their hands of the act: “You’ll have to be responsible for what needed to be done.” None of them are ever convicted for the murder.

The Freikorps throw Luxemburg’s body into the canal, next to Tiergarten. It will only be fished from the water six months later. Today a small monument with her name rises from that spot underneath the bridge connecting the two parts of the zoo. Hopefully animal-loving Luxemburg would have appreciated its proximity to the anteaters’ enclosure.

Luxemburg’s body moves to its final resting place at the Socialist Cemetery in Friedrichsfelde alongside other revolutionary martyrs on January 25. Some 100,000 people attend the funeral (although, still missing, her body will only be buried there a half a year later). The original monument by Mies van der Rohe is destroyed by the Nazis eight years later, and a new one is erected by the GDR. Every year, on the second Sunday in January, tens of thousands of people commemorate Rosa Luxemburg at her grave with a red carnation. This year, it happens on January 13, 2019.

The small triangular square across from the Volksbühne once known as Bülowplatz, in the centre of the then Jewish Scheunenviertel, has been the seat of the Communist Party since 1926. Gone are the revolutionary slogans and giant portrait of Lenin that used to cover the Karl-Liebknecht-Haus, but the building on Weydingerstraße still serves as the Die Linke headquarters. The square was named after Luxemburg by the Soviet regime in 1947, and has not, unlike Marx-EngelsPlatz and Klara-Zetkin-Straße, been renamed after the Wende. Twelve years ago, the Platz was turned into a Rosa Luxemburg memorial, with 60 of her quotes carved into bronze strips and set into the pavement South-East of the U-Bahn station of today.

This article was first published in Exberliner in January 2019.