Round Two for the ALU: the Fight to Organize Amazon Continues

On Monday, 1,600 warehouse workers in Staten Island will vote on whether or not to form the second-ever Amazon union in the United States. In response, the company is using every dirty trick in the book to intimidate workers and undermine the vote. 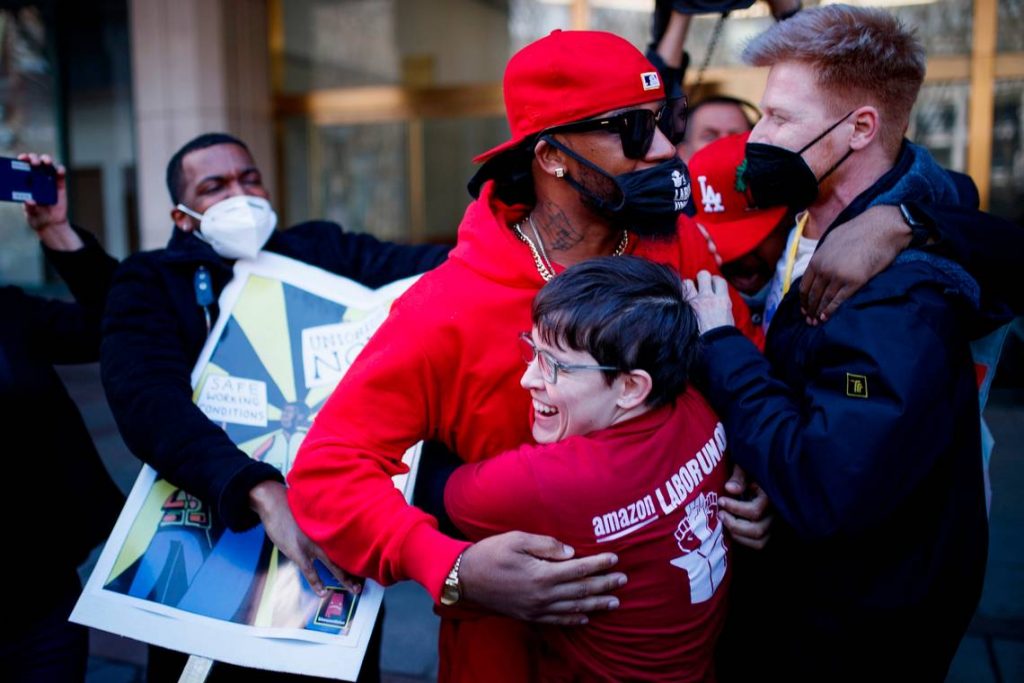 The Amazon Labor Union (ALU) victory on Staten Island has transformed the terrain of the U.S. labor movement and has inspired millions of workers. On Monday, a second unionization vote will begin at another Amazon warehouse of 1,600 workers just across the street, and the stakes couldn’t be higher. If successful, this second victory at warehouse LDJ5 would further consolidate the power of the ALU and prove that their first win was not a fluke. A second successful unionization vote would also confirm the importance of the ALU’s grassroots organizing model and hasten what seems like an already inevitable wave of organizing efforts at other Amazon warehouses across the country. In response, Amazon is taking every opportunity it can to lie, cheat, and intimidate workers in order to undermine the unionization effort and to overturn the first vote. Working people and unions everywhere must come out in full support of the ALU’s ongoing unionization efforts on Staten Island and beyond.

Amazon, which raked in record profits last year, has built its entire business model on the exploitation of an underpaid, overworked, and highly precarious workforce. The starting pay for most full-time warehouse workers is less than $30,000 a year and the turnover rate, as the New York Times reported in June, is 150 percent, meaning that the vast majority of workers never make it past the first year of employment. This is because the company treats its workers like cogs in a machine, monitoring and measuring their every move in order to provide cheap and fast delivery of its products around the world. And it is this exploitative business model that makes Amazon so incredibly hostile to any organizing efforts that might threaten its profits, or its ability to totally control every minute of their employees’ work life. The company has spent millions of dollars to defeat unionization efforts in its warehouses, including filing more than 25 objections to the original vote at the JFK8 warehouse.

As Labor Notes reported earlier this month, Amazon is using a host of dirty and illegal tactics to convince the employees at the LDJ5 warehouse to reject the union. Managers and company representatives have pitted workers against one another by using racist and sexist language to defame union organizers. They have repeatedly torn down union banners and illegally destroyed union literature in the warehouse break areas. And they have continued to force employees to attend mandatory anti-union meetings where they have smeared the ALU, questioned the union’s ability to manage a budget or negotiate a contract, and lied to workers, claiming that a union could actually lead to lower wages and fewer benefits. While these meetings are, for now, still technically legal, it is illegal to threaten workers with lower wages if they vote for a union.

The company has also brought in high-cost undercover consultants to pose as workers in order to convince employees to vote no on the union. These independent contractors are reportedly being paid in excess of $3,000 a day to dissuade workers from voting yes, even as the company continues to pay its frontline warehouse workers less than a living wage. Indeed, just one of these consultants could cover the wages of more than 25 workers at LDJ5. And perhaps worst of all, the company is harassing and attempting to intimidate workers who support the union efforts. At least one employee, a member of the ALU, was reprimanded and written up for “soliciting” her fellow employees about the union while on the clock. This kind of harassment and intimidation is clearly illegal. As the NLRB explains: “your employer cannot prohibit you from talking about the union during working time if it permits you to talk about other non-work-related matters.”

While Amazon and other corporations like it have largely been successful in staving off such organizing efforts in the past — the defeat of the RWDSU’s attempts to organize the Bessemer warehouse is perhaps the most salient recent example — the ALU managed to break that pattern. This is in large part because of the ALU’s bottom-up organizing model. For example, at the JFK8 warehouse, workers did not sit idly by while management told them they should vote no. Instead, they used those mandatory captive audience meetings to speak up and organize other workers to vote yes, because they knew their fellow workers had their backs. But ultimately the success of these tactics, which are hardly new or original, is about much more than strategy — it’s about politics.

While it’s tempting for labor activists to focus exclusively on the strategy behind the ALU’s victory, that’s only a part of the story. This struggle is taking place within the broader context of the ongoing political, economic, and social crises of capitalism that have galvanized the working class since the great recession. Many of the workers at Amazon are part of what is now being called “Generation U,” for “Union.” They have spent their entire adult lives living and working under a political and economic regime of austerity and economic precarity that has radicalized them and increased their willingness to organize. Likewise, the rank-and-file activists among the more than 9,500 mostly Black, Brown, and immigrant workers at the two warehouses on Staten Island represent a new generation of worker-organizers. Forged in the crucible of the pandemic and the Black Lives Matter uprisings of 2020, these workers have taken that spirit of rebellion into their workplaces, making connections between the exploitation they experience on the job and the oppression they face in the streets. As Chris Smalls told Jacobin in July:

We already knew that there was racism in the company. Just look at the smear campaign that they wanted to wage against me last year, calling me “not smart or articulate.” This is why I have to continue to fight. If we don’t stand up for ourselves, they’re not going to do it for us. They’re not going to stand in solidarity with the black community. We’re going to have to expose all of these things and hold them accountable. That’s what we’re trying to do as well as unionizing these facilities.

Thanks in part to the multitude of crises set off by the pandemic, these workers also know more than ever exactly how essential their labor is, and understand the power they hold as employees of one of the biggest and most profitable corporations in the United States. The success of the ALU campaign, where the big unions have failed, also shows the power of grassroots unionism and that there is no substitute for the collective self-organization for the working class.

And that success has been met with wide support across the country. A recent poll conducted by More Perfect Union found that more than 75 percent of Americans support the Amazon Labor Union and agree that unionization is essential in order to win better pay and safer working conditions for employees. That figure rose to 84 percent among those aged 18 to 34. The overall approval rating for unions, according to Gallup, is the highest it’s been in almost sixty years. A full 68 percent of Americans surveyed said they approve of labor unions, compared to just 28 percent who disapproved. These approval numbers went up even more (77 percent) for 18- to 34-year-olds. Meanwhile, petitions filed with the NLRB for new union elections have increased by 57 percent since January, and the ALU has been contacted by hundreds of Amazon workers at warehouses across the country asking how they, too, can organize a union in their facilities.

The victory on Staten Island, as encouraging as it is, comes after decades of declining unionization levels and strike activity. Despite the many recent examples of high profile labor actions in the United States, including the wave of strikes last October and the massive teachers strikes that swept many red states in 2018 and 2019, the labor movement has struggled to find its groove amid the myriad crises of the last decade.

But that trend seems to be changing, and the ALU is just one part of a new labor movement that seems poised to overturn those decades of decline. While the workers at JFK8 were still organizing for a vote, Starbucks workers in Buffalo formed the first ever Starbucks union in December. In the less than five months since then, 24 Starbucks locations have held union votes, of which only two voted against forming a union. And, despite a shock and awe anti-union campaign by the company, new stores are holding successful union votes almost every day. While the numbers of workers in these branches is certainly small — sometimes just one or two dozen workers — these victories have shown that workers everywhere can and must organize for the interests of the entire class.

The ALU and Starbucks Workers United have now put out a call for mass rallies on May 1 to defend the right to organize. They are asking “the whole working class” to “join together in solidarity this May Day 2022 and mobilize against the union busting of Starbucks, Amazon, and every other company engaged in repressing its workers.” This collective action across unions is an extremely positive sign and an important step in building a renewed and fighting labor movement. Left voice stands in full solidarity with the workers at LDJ5 and the ALU in their struggle to organize themselves and in their fight against union busting. The workers at Amazon and Starbucks are leading the way and we must join them by making 2022 the year that labor strikes back. 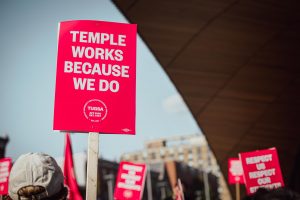