Russia strengthens its power in its “backyard”

The forceful advance of the bonapartist Russian regime in its operations in Georgia over the last four days is a sign of Russia’s reemergence, after its decomposition in the decade of the 1990’s, and, fundamentally, of the acceleration of the US hegemonic decline after its disaster in Iraq. 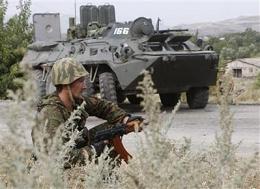 Russia has achieved a tremendous victory. The terms of the ceasefire, broadly favorable to Russian demands, negotiated by French President Sarkozy, current temporary President of the European Union, prove that (although new skirmishes cannot be ruled out).

From the military point of view, Russia has shown its ability to drive Georgia out of South Ossetia and Abkhazia completely, in addition to having smashed the Georgian military machine.

On the political level, it has enormously destabilized the Georgian government of Mikheil Saakashvili, who, in spite of the demonstrarion of support in Tbilisi on August 12, attended by hundreds of thousands of people, was fatally wounded, after having begun a war and then failing to carry it through.

Last and most importantly, Russia has managed to show the powerlessness of the West and, at the same time, to weaken every serious prospect that Georgia will join NATO or the European Union. The US failure to support its main puppet regime in the region in its hour of need, because of excessive US commitments in Iraq and Afghanistan, is a big blow to US influence in the Caucasus and in the other former Soviet republics, that allows Russia to move forward to rebuild its zone of influence in its borderlands.

For some analysts, the attack launched by Saakashvili’s pro-imperialist government against the capital of South Ossetia, recalls the last years of the Argentinean military dictatorship, when in 1982, then de facto President Leopoldo Fortunato Galtieri launched the invasion of the Malvinas Islands. At that moment, the Argentinean general was confident that, to say the least, the US would maintain neutrality in case of a conflict between Buenos Aires and London, because of the importance the dictatorship had for Washington since it was operating in a semi-secret manner against the Sandinista regime in Nicaragua. In the same way, Saakashvili’s overestimation of Georgia’s role as an outpost against Russia was the key to his miscalculation.

Nevertheless, however interesting it may seem, this comparison has its limits. It is difficult to believe that Georgia decided to challenge Russia without having any kind of gesture by the Pentagon, as, for instance, former Soviet Chairman Mikhail Gorbachov suggests. The current Georgian regime was prepared by Washington, promoting the Rose Revolution in 2003. In addition, the Pentagon has had a strong presence in Georgia, training their army and anti-terrorist forces since 1999; the Georgian government receives big sums of money in armaments with the aim of reinforcing the geopolitical encirclement of Russia, as well as looking after the only pipeline that carries oil from the Black Sea to Europe without passing through Russian territory.

One or the other: either US intelligence made another miscalculation, like the one that led it to get bogged down in Iraq, or else the US saw Russia through the prism of the 1990’s when, in addition to the paralysis of the Russian government, the army was demoralized and lacked financing, which came from the exhausting conflicts in Chechnya. More generally, the US has not seen a decisive military movement by Russia beyond its borders since the war in Afghanistan, that ended in a humiliating defeat (“the Russian Vietnam”). For years, Russia has taken care not to carry out this type of military operations. In this framework, it is not absurd to think that the same people who believed the Iraqis were going to welcome them with flowers for having toppled Saddam Hussein, expected that the Russians would not respond to the Georgian attack.

The real miscalculation is not to have taken into account the fact that Russia got stronger all these years. It has not only reconstituted its army and the Great Russian patriotism of the population as the state ideology through its control of the communications media, but also reconstituted itself economically — unlike the years of Yeltsin when it defaulted on its enormous debt in 1998 — now it has the third largest amount of foreign reserves worldwide and has a big trade surplus, based on gas and oil. In this context, both militarily, because of the weakness of the Georgian forces, and in economic terms, because of the European Union’s dependence on its energy, Russia did not see the operation as being very risky. On the contrary, it was the moment Russia was waiting for, to reaffirm its powerful new role to counteract its loss of influence in its backyard and among the European nations. Russia was waiting to draw a red line after the imperialist advance with the Orange Revolution in Ukraine (whose definitive passage into the NATO camp meant a fundamental threat to Russia’s national security), and, more recently, support by the US and the European Union for Kosovo’s independence, brazenly ignoring Russia’s objections (Russia was opposed to damaging the principle established by the victorious powers in the Second World War in Europe, of not modifying borders, to avoid conflicts, a question that could open a Pandora’s box in the Russian Federation, formed by different nationalities and ethnic groups.

For its part, US imperialism, still trapped in Iraq, needs Russia politically to exert pressure in impossing sanctions on the Iranian regime. Above all, it wants to prevent the Russian state from selling weapons to Iran or Syria, especially its highly effective air defense system, in the face of an eventual war. With its humiliation, Georgia paid for the geopolitical reality that shows that Iran and the Middle East are now more important in calculating US foreign policy.

A conflict with two reactionary camps

The ultimate origin of the conflict, is, on the one hand, the Russian resurgence after the rise of Putin’s Bonapartism, and, on the other, the continuation of the US policy of encircling Russia to curb its ambitions for power and to give Russia’s integration into the world economy dominated by imperialism, an increasingly semi-colonial character, like the Russian dynamic — only temporarily reversed — was in the decade of the 1990’s, during Yeltsin’s administration. For the US, the independence of Georgia, or, for the Russians, the independence of South Ossetia and Abkhazia, are only pocket change in the calculation of US imperialism or of the rising Russian capitalist state in their quarrel over influence and power in the system of relations between states.

Demands by the US and Great Britain that Russia respect the “territory integrity of Georgia,” that is, Tbilisi’s right to repress and kill the separatist population of South Ossetia, are totally hypocritical, coming from those who keep Iraq and Afghanistan under occupation. Equally dishonest is the Russian request, advanced in the UN during the crisis, in defense of the right of self-determination of South Ossetia and Abkhazia, when, for years, Russia has been denying self-determination to the Chechens to blood and fire.

In this context, from the first day, we revolutionaries have clearly indicated that this was a reactionary conflict, because of which we repudiated Georgia’s attack on South Ossetia and demanded the withdrawal of Russian forces from Georgia. We are opposed, both to the advance of NATO in the region, and to every militarist attempt of Putin-Medvedev’s Bonapartist Russian regime to use the crisis in South Ossetia to reconstruct a zone of influence over the territories of the former Russian empire. At the same time, we struggle for the fall of Saakashvili’s repressive, neo-liberal, pro-NATO government, a puppet of imperialism that has had the third-largest contingent of troops in Iraq, and the biggest in proportion to its population, and for the expulsion of all the US political and military advisers. A semi-colonial country guarded by NATO is no alternative to the historical oppression that all these nations suffered under Great Russian nationalism. On the contrary, the existence of pro-imperialist governments, as in Georgia, the Ukraine and the rest of the Republics of the former USSR, are an obstacle to awakening the Russian workers and facilitates the xenophobic propaganda of Putin and Medvedev’s Bonapartist government against the Georgians and other nations, accusing them of being part of a Western conspiracy to prevent Russia from overcoming its exhaustion in the 1990’s and recovering its imperial role. This reactionary propaganda serves to reconstitute the Russian state internally, against the historic interests of the workers and oppressed nationalities in the current Russian Federation. For that reason, Putin’s Great Russian nationalism, in spite of the fact that it has disagreements with Washington, is not a progressive alternative to NATO.

The struggle against the policy of reconstruction of the zone of influence of growing Russian capitalism, that aspires to be recognized as a regional power, is only possible from the most implacable opposition to the advance of NATO in Eastern Europe and in the Republics of the former USSR and opposing the penetration of this region by European and US imperialisms. As we have said in view of the recent conflict, only a Georgian workers’ and peasants’ government that breaks with US imperialism and that of the European Union and at the same time raises the right of self-determination and even secession of South Ossetia and Abkhazia, if they so desire, could have the authority to stop Great Russian nationalism by appealing to the only force capable of defeating it: the Russian workers. They must break with the xenophobic policy of the Russian government, that only guarantees big deals for a handful of big capitalist barons and friends of the central government, and return to the proletarian banners of internationalism and defense of the peoples’ self-determination, that permitted the temporary solution of the national problem of old tsarist Russia during the first years of Bolshevism until the Stalinist counterrevolution. Only a party that has fought against Stalinism and draws a sharp balance sheet of this monstrous experience not only for the masses of the former USSR, but on a world level, the Russian Section of the reconstructed Fourth International, could offer this perspective.

–Georgia: A Russian protectorate from 1783, in 1810 it was annexed to the Russian empire. After the Russian Revolution, it formed part of the Soviet Socialist Republic of Transcaucasia, together with Armenia and Azerbaijan, which was dissolved; in 1936 it became the Soviet Socialist Republic of Georgia. After the fall of the USSR in 1991, Georgia declared its independence. Tbilisi: capital of Georgia.

–South Ossetia: In 1922, it was declared an Autonomous Region of Georgia. In 1989, the local parliament declared South Ossetia an Autonomous Republic inside Georgia, an act ruled unconstitutional by the Georgian parliament. In 1990, the sovereignty and the creation of the Republic of South Ossetia were proclaimed; in response, Georgia considered South Ossetia’s autonomy abolished, which caused the beginning of confrontations between South Ossetia and Georgia from 1991. These confrontations stopped after the Dagomis Agreement was signed in 1992 (between Russia and Georgia), after which Russian “peacekeepers” were deployed, that backed South Ossetia with armaments and money. In 2006 a referendum (not recognized by Georgia) was held, where more than 90% of the population voted for independence.

–The Orange Revolution and the Rose Revolution: Also known as the color revolutions, processes that happened during 2003 and 2004, channeled electorally, through which pro-Russian candidates in the former Soviet republics of Ukraine and Georgia were defeated by candidates supported by the US and the European Union.