The Russian parliament has unanimously criminalized anti-war statements. The international Left must stand in solidarity with Russians facing this repression. 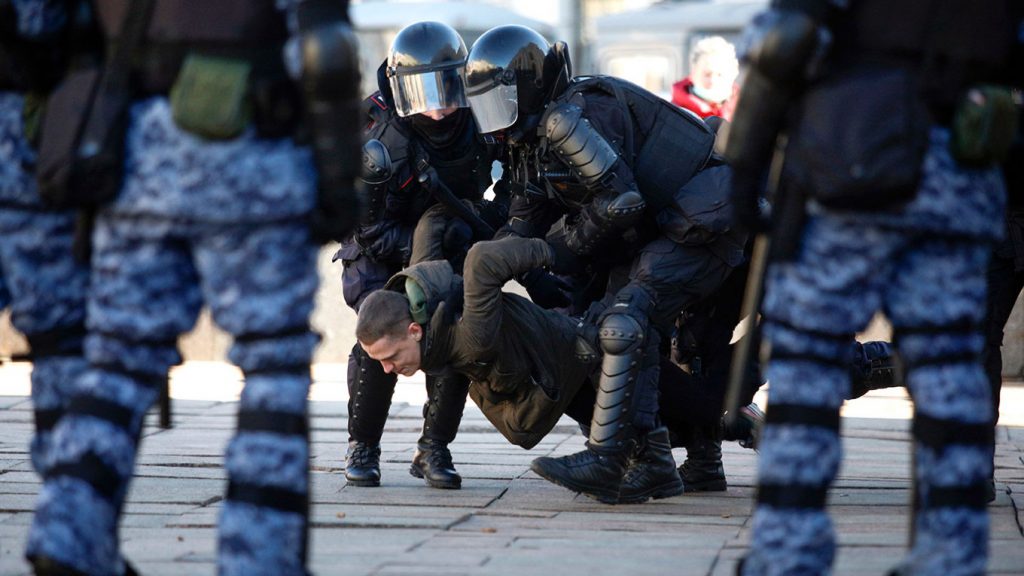 On March 4, with no opposition, the Russian parliament passed an authoritarian law making criticizing the war against Ukraine a crime punishable by three to fifteen years imprisonment or a fine. It forbids saying anything the government calls “false information” about military matters or “discrediting” the armed forces. Since the government refers to the invasion only as a “special military operation,” even publicly calling the war a “war” is now a criminal act.

The upper and lower houses, the Council and the Duma, quickly voted the bill through, apparently without a single “No” vote, and President Vladimir Putin signed it into law. Duma Speaker Vyacheslav Volodin fulminated, “Those who lied and made declarations discrediting our armed forces will be forced to suffer very harsh punishment.” Another parliamentarian equated Russians criticizing the current invasion of Ukraine with WWII collaborators who had to be executed.

On March 6, substantial numbers of people across Russia protested. The state emphatically wants to stop such public mobilizations. Police arrested 4,600 protesters, including nearly 2,000 people in Moscow. A video from Yekaterinburg showed police clubbing a protester on the ground, and an activist in the Urals was fined 60,000 rubles ($624) for urging people to join protests.

Putin’s United Russia (UR) party holds 142 of 167 Council seats and 324 of 450 Duma seats. In the 2021 Duma elections, the state banned candidates aligned with jailed politician Alexei Navalny and banned the NGO Golos from monitoring the election. Some statisticians estimated that actual voter participation was only 38 percent and not the claimed 52 percent, in other words, one quarter of votes were likely fictitious. Pre-election polling showed around 30 percent support for UR, but it received 50 percent in the election. Very high margins for UR were found to be correlated with polling stations that reported exceptionally high voter turnout. Opposition parties denounced online voting results heavily favoring UR as non-credible.

The Communist Party of the Russian Federation (CPRF) has 57 Duma seats and is the only sizable supposed opposition. In 2021, the CPRF received 19.2 percent of the reported vote, up from 13.3 percent in 2016. Many analysts suggest the electoral shifts were due to stagnating living standards of the working class. The leader of the CPRF declared, “These are fake elections that nobody needs, and they are deepening social divisions.” But the CPRF’s support for the invasion and the censorship of anti-war declarations not only betrays the Ukrainian people and Russians’ freedom of speech but also pathetically bows to a president whom they accuse of cheating voters.

Groups of Russian musicians, scientists, athletes, students, and history faculty have issued public anti-war statements, while tens of thousands of ordinary people have protested in city squares. Police arrested over 8,000 Russians for taking part in protests within the first ten days of the invasion, including 77-year-old Yelena Osipova. An internationalist peace activist, Osipova was born in Saint Petersburg (known then as Leningrad) in 1945, immediately after the Nazi starvation siege. During a demonstration against the Ukraine invasion, she carried signs reading, “Son, don’t go to this war! Soldier, drop your weapons and you will be a real hero! Don’t shoot!”

As the law passed, three liberal media outlets were shut down, essentially eliminating non-government-aligned media. Authorities suspended Dozhd TV for “inciting extremism, abusing Russian citizens, causing mass disruption of public calm and safety, and encouraging protests.” In its last broadcast, a journalist made a red fist salute and declared, “No pasarán,” or “They will not pass,” the slogan of anti-fascists in the Spanish Civil War. The station’s staff collectively walked off the set. Ekho Moskvy radio, which interviewed Ukrainian journalists about the war, shut down rather than being censored. And Novaya Gazeta said it would stop publishing articles about the war and delete its previous war coverage because “Military censorship in Russia [has escalated] to the threat of criminal prosecution of both journalists and citizens who spread information about military hostilities that is different from the press releases of the Ministry of Defense.”

The masses in the U.S. and the E.U. have much wider access to critical media and greater freedom to make critical statements than the Russian people. But let us be clear. The U.S. ruling class does not actually respect the free expression of working class and oppressed people. During the first two weeks of protests against the murder of George Floyd, police in the 50 largest U.S. cities arrested over 17,000 protesters.

The U.S. capitalist media isn’t directly managed by the government, but it is run by some of the world’s largest corporations, and it sympathizes thoroughly with the objectives of U.S imperialism. Censorship is typically unnecessary to ensure the dissemination of pro-militarist, pro-imperialist content.

The establishment media dismiss as unreasonable Russia’s pre-invasion demands that NATO never expand to Ukraine and that it remove troops and weapons from Poland, Romania, and the Baltic states. Much coverage sympathetically repeats statements by U.S. officials. The New York Times declared that Ukraine was not about to enter NATO any time soon, but that joining the Western military alliance is an inalienable right of any accepted state.

U.S. media coverage has frequently omitted the fact that throughout 2021, Ukrainian president Volodymyr Zelensky publicly demanded that NATO add Ukraine as soon as possible. In January 2021, he asked, “Mr. President [Biden] why are we still not in NATO?” In April he said to NATO Secretary General Jens Stoltenburg, “NATO is the only way to end the war in Donbas. Ukraine’s [Membership Action Plan] will be a real signal for Russia.” Stoltenburg later replied, “We need more,” before Ukraine could join, at an unspecified future time. In December, as Putin built up troops to threaten Ukraine and made his diplomatic demands that the West agree to end NATO expansion and remove military assets from Eastern Europe, Stoltenburg reiterated that NATO intended to add Ukraine at an unstated future time. The U.S. bourgeois press has de-emphasized this information and presents the NATO “open door” policy on possible additional member states as self-evidently just.

Much of the Western press immediately celebrated Western European steps toward remilitarization following the Russian invasion. The Financial Times published an incredible article in December titled, “The Strategic Case for Risking War in Ukraine” in which it stated, “Another Russian invasion of Ukraine would forge an even stronger anti-Russian consensus across Europe.” Fareed Zakaria says he now hopes to see “the emergence of a powerful, strategically-minded, national security-minded Europe that is willing to defend the liberal order.”

Finally, as Western sanctions were rolled out, the Western press intended for popular consumption carried a slew of cheery stories about sanctions targeting Russian oligarchs. This suggested that sanctions would hurt people who deserve to be hurt, encouraging working-class Americans to support them. But the Financial Times immediately explained explicitly that the West has blocked the Russian central bank from withdrawing assets held in U.S. and European banks and prohibited many transactions with Russian business, causing Russia to rapidly run out of dollars and Euros with which to pay for imported goods. It quoted French Finance Minister Bruno le Maire: “We will cause the collapse of the Russian economy” — meaning massive currency devaluation, bank failures threatening regular people’s savings, unemployment, and extreme shortages of goods including medicines and parts for all manner of workplace equipment. This is a very different story from the pleasant prospect of billionaires losing money.

In this war, the capitalist Russian government, with its censorship and state-controlled media, is the enemy of the Russian working class. The Democrats, the Republicans, and the bourgeois media want us to look at the severe injustices committed by the Russian government and cheer for our own state. This is a manipulation.

Nationalism on all sides in the current situation supports the power of capitalist criminals. The Left in the U.S. must build real internationalism.

True internationalism has nothing in common with DSA-backed politicians such as Alexandria Ocasio-Cortez who have consistently voted yes to sanctions on Russia along with the annual Congressional bill for the $800-billion-a-year U.S. war machine, the very same military apparatus that has committed immense crimes against the people of Afghanistan, Yemen, Palestine, and Somalia. In the U.S., the Left must break with loyalty and conformity to the capitalist system and its liberal party and demand a no vote to all imperialist projects.

It is a sham when establishment media pretends not to see the similarities between these two ruling classes. Both the Russian government and the U.S. government need to be resisted to free humanity from war, oppression, and exploitation. Going along with nationalism seems “easier” and more “effective” for getting small reforms in the short term. But only internationalism allows the working class to truly educate itself and build worker solidarity across borders, including in “enemy” countries.