Sacco and Vanzetti: Murdered by Capitalism On this Day in 1927

Two anarchists in Massachusetts were arrested and convicted of robbery and murder in a sham trial and then executed in 1927. This is their story in brief. 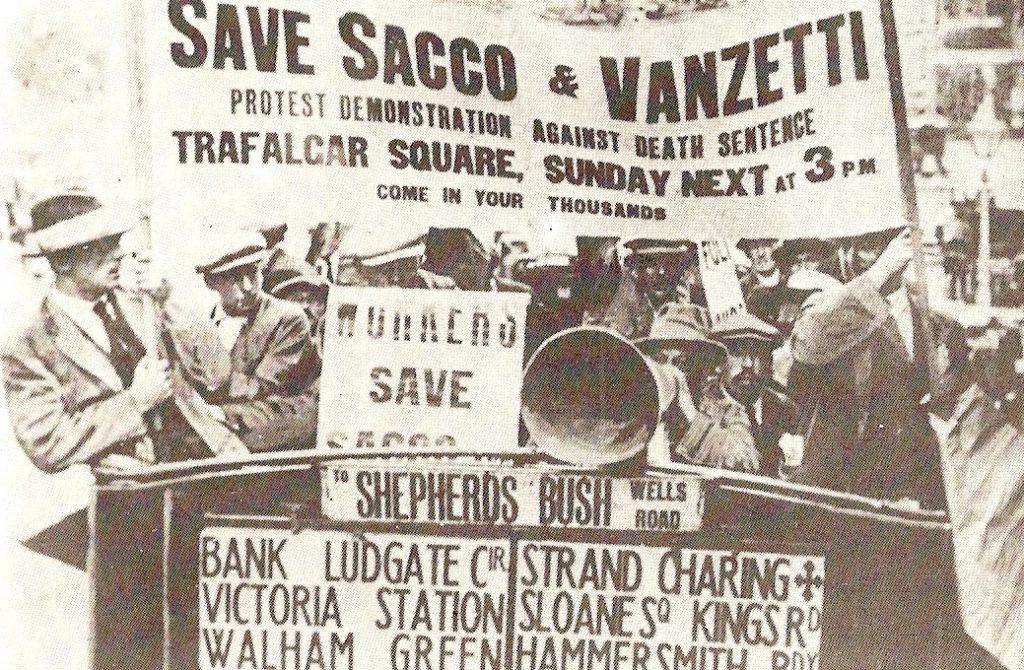 “Did you see what I did with those anarchistic bastards the other day? I guess that will hold them for a while … Let them go to the Supreme Court now and see what they can get out of them.” Those words were reportedly uttered by Judge Webster Thayer, who presided over the trial of Nicola Sacco and Bartolomeo Vanzetti in 1921. He was speaking to another lawyer while visiting Dartmouth College, after denying a 1924 appeal. During the trial itself, he said to reporters, “Did you ever see a case in which so many leaflets and circulars have been spread … saying people couldn’t get a fair trial in Massachusetts. You wait till I give my charge to the jury. I’ll show them!”

Of course, it was nothing remotely close to a fair trial. Nothing about the arrest, trial, subsequent appeals, or execution of Sacco and Vanzetti was fair. How could it be? It was capitalist “justice” at work, doing its job.

Today, August 23, is the anniversary of that execution in 1927. Sacco and Vanzetti were murdered by the state in the electric chair at Charlestown State Prison in Boston, Massachusetts.

Sacco was a 32-year-old shoemaker and Vanzetti a 29-year-old fish peddler. They were arrested and charged with double murder in May 1920 about three weeks after a paymaster and payroll guard were shot to death during a payroll heist at a shoe company in Braintree, just south of Boston.

The crime — and the arrest — took place during the height of the infamous “Red Scare” in the period after World War I. Earlier that year, U.S. Attorney General A. Mitchell Palmer had ordered roundups across the country, especially of foreign radicals. The newspapers were full of anti-immigrant vitriol; at the time, a full third of the U.S. population was immigrants or their U.S.-born children. Workers were fighting for unions and striking on a regular basis across the country. Politicians, the bosses, and the press warned continually about the threat of Bolshevism, anarchism, and revolution. Three days before the two men were arrested, an anarchist editor taken into custody during what have come to be called the “Palmer Raids” died after “falling” from a 14th-floor office window of the New York City Department of Justice.

Neither Sacco nor Vanzetti had a criminal record. Local police departments in southern Massachusetts and nearby Rhode Island were already searching for a gang that had carried out a string of armed robberies in the air. But the cops had already decided to use the Braintree robbery/murder to go after local anarchists.

There wasn’t a single witness at the trial who had gotten a good look at the perpetrators of the murder and robbery. At best, those who testified were able to describe a shootout in the street and the robbers driving away in a Buick as they threw tacks onto the road to deter their pursuers. The arresting officer testified that the defendants were reaching for weapons when confronted and “acting nervously.”

The trial was a sham. The pair’s radicalism became one of the prosecution’s central arguments. The defendants were confined to an iron cage constructed in the courtroom during the proceedings. The jury foreman trial was overheard repeatedly making anti-Italian slurs. The judge told the jury — a jury most definitely not one of the two men’s peers — to remember their “true American citizenship” when he gave them instructions before they began to deliberate.

It took the jury only a few hours to find them guilty of first-degree murder on July 14, 1921. Despite recanted testimony, inconclusive ballistics evidence, all the prejudicial statements by the jury foreman and judge, and even a later confession from someone else, every appeal was denied. Six years passed, but just after midnight on this day in 1927, Sacco and Vanzetti were executed.

A Lesson in Proletarian Defense

The response to the arrest of Sacco and Vanzetti is a lesson in how to mount a defense of victims of trumped-up charges by the capitalist state. A defense committee was formed immediately after the two men were arrested, mostly by other anarchists. It clashed with defense lawyers who spent money on trying to find the real perpetrators of the crime or objected to the committee’s propagandizing.

But the Sacco-Vanzetti Defense Committee showed the way. It publicized the arrest and turned it into an international cause. Every week, it produced articles for union publications across the country. It created a speakers’ bureau and sent people to make presentations in factory towns, mining camps, and on college campuses. Pamphlets about the case were printed in the thousands. And the committee worked hard to involve not only the Left but also intellectuals, lawyers, and celebrities with liberal political views.

When pressuring the Massachusetts governor for clemency, the committee was able to present letters and signed petitions from Albert Einstein, George Bernard Shaw, H.G. Wells, and others, Prominent socialist organizers and labor leaders stood on their side. The American poet Edna St. Vincent Millay wrote her famous “Justice Denied in Massachusetts.”

But it was the mass mobilizations around the world that most worried the ruling class and its judicial system lackeys. In response to the pending executions in August 1927, the Industrial Workers of the World (IWW) called for a three-day nationwide walkout in protest. In the Walsenburg coal district of Colorado, all but 35 of the close to 1,700 miners dropped their tools and went on strike. The action precipitated a much more widespread coal strike in the state and Rocky Mountains region.

The year 1927 had already seen massive protests across the globe. Every major city in North America and Europe had workers in the streets. Demonstrations also took place in Australia, New Zealand, South Africa, Japan, Brazil, Argentina, Uruguay, and Dubai.

While these protests were unable to stop the murder of Sacco and Vanzetti, they were a reminder to local and international capital alike of the power of a united working class.

The story of Nicola Sacco and Bartolomeo Vanzetti is a brutal reminder of how the capitalist state functions. It mattered not one whit that there was no evidence that they had committed a crime. The cops — those “special bodies of armed men” Lenin wrote about — were bound and determined to use the robbery/murder to make an example not only of anarchists for their politics, but immigrants for being “not American.” The Red Scare was a period of tremendous repression against the Left and against workers who were organizing in unions to protect their interests. The rulers wanted to stamp that out before it took deeper root. And they wanted to squash the confidence in working-class power that had increased exponentially with the success of the Russian Revolution only a few years earlier.

As Vanzetti told the court during an appeal hearing of the death sentence on April 19, 1927:

Now I should say that I am not only innocent of all these things, not only have I never committed a real crime in my life — though some sins but not crimes — not only have I struggled all my life to eliminate crimes, the crime that the officials and the official moral condemns, but also the crime that the official moral and the official law sanctions and sanctifies — the exploitation and the oppression of the man by the man, and if there is a reason why I am here as a guilty man, if there is a reason why you in a few minutes can doom me, it is this reason and none else.

If mentioned at all in the history classes most students attend in this country, their case is almost always an aside. Their erasure, and the erasure of the story of repression wrought by the U.S. government against immigrants and political activists over decades and centuries, is no accident. It ought to be branded into our collective consciousness — which is precisely why the rulers work overtime to keep it and so much else in our history out of our minds.

Today, 101 years after the arrest and 94 years after the execution of Sacco and Vanzetti, we see a new wave of efforts to criminalize dissent. Let’s not forget the lessons of how to build a massive fightback against the rulers, and not forget what the two anarchists knew: only a revolution that eliminates capitalism from the face of the earth will end the marginalization and subjugation that keeps us subject to ruling-class oppression and repression.