This week, Sanders the “socialist” praised Trump’s executive order to withdraw the United States from the TPP (Trans-Pacific Partnership) and received praise from the union bureaucracy. 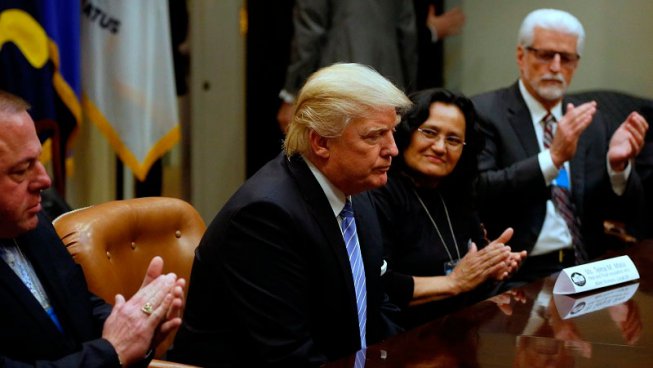 Trump signed an executive order on Monday, January 23 to pull the United States out of the Trans-Pacific Partnership, as he promised during his campaign. After the measure was made public, it was supported by several union leaders, Senator Bernie Sanders, and other Democratic legislators.

Also on Monday, Trump met with the powerful Teamsters union and several construction unions, including the United Association and the United Brotherhood of Carpenters. The leader of the latter, Doug McCarron, who exchanged jokes and pats on the back with Trump on Monday, had campaigned for Hillary Clinton in the last presidential elections.

The AFL-CIO leader himself, Richard Trumka, who had also voted Clinton, said that the country’s withdrawal from the TPP was “a good first step toward building trade policies that benefit working people.”

On Tuesday, Democratic Senator Bernie Sanders backed President Trump once again in reference to Trump’s executive order on the TPP. In a press release, he said that he was glad that the trade deal was dead, because in the past 30 years, the United States had entered into agreements that had “cost [the country] millions of decent-paying jobs and caused a ‘race to the bottom’ which has lowered wages for American workers.”

He added “If President Trump is seriously opposed to outsourcing, he can lead the way by shutting down his own sweatshops in Bangladesh, China and Mexico and paying workers in the U.S. a living wage. Then, Congress and the president can work together to develop a new trade policy that helps working families, not just multi-national corporations.”

A Narrative in favor of Precarious Work
What neither the union bureaucracy nor Sanders say is that the same day of his photo-op with the union leaders, Trump met with businessmen and promised them that he would review labor regulations. This can only mean an increase in precarious work conditions and lower wages for millions of workers. The trade measures are not aimed at benefiting working families, as Sanders claims, but the industrial bourgeoisie.

With their support for this policy, unions and democrats continue to sustain the xenophobic preconception that it is the workers of other countries who are responsible for low wages and unemployment, when the only ones who benefit from outsourcing are businessmen who continuously seek cheaper wages and impose worse conditions to increase their profits.

The “getting back our jobs” rhetoric is extremely hypocritical. Its proponents talk about American jobs with decent wages, but they do not say anything about improving the lives of the many workers in the United States with low-paying jobs, no union rights, and precarious working conditions. While a significant number of people who voted for Sanders in the primaries were activists and supporters of the Fight for 15 movement, the Trump camp is interested only in helping companies make bigger profits by exploiting labor abroad and at home.

No worker in China or Bangladesh benefits from the elimination of industrial jobs in the United States as a result of outsourcing. In the same way, any aluminum or automobile workers who do get back their jobs will end up working in worse conditions. In fact, Trump’s pick for Labor Secretary, Andrew Puzder (a restaurant business leader), is fiercely opposed to a 15 dollar minimum wage because it affects the interests of businessmen (like him). His confirmation as Labor Secretary is bad news not only for those who make the minimum wage (which is currently at $7.25) but for the entire working class as well.

This is not a new policy for the US working class. In 2009, in the context of Obama’s big bank and corporate bailouts, the unions were guarantors of the agreement signed with the auto industry. At that time, the UAW union consented to changes in their collective agreement (eliminating rights, lowering wages, etc.) to make sure that the company would receive federal money and avoid bankruptcy.

Today, the bureaucracy is preparing to support a new “big precarious agreement,” and the Democrats’ support for these measures sustains a “narrative” whose purpose has nothing to do with improving the living and working conditions of the majority of the population, including the disgruntled workers who voted for Trump because they were sick of neoliberal policies.

The Democrats, desperate to restore the party and reeling from their electoral defeat and lack of electable figures after Obama’s second term, have entered the Trump era legitimizing a government with low approval ratings and a president who is repudiated by millions of people, as we saw in the recent massive anti-inauguration demonstrations and Women’s March. They have set in motion their powerful apparatus with proven experience in channeling the indignation of the masses and co-opting left struggles and progressive movements. A large segment of today’s social movements, which emerged from the capitalist crisis unleashed in 2007 and which was forged by popular discontent under the Obama administrations, now faces the challenge of strengthening their political independence to prevent that energy from being wasted on the reconstruction of the Democratic wing of the two-party system.