Bernie Sanders likened himself to FDR and pledged to take up the  “unfinished business” of the New Deal. His speech was a call for national unity to fight fascism. But his description of democratic socialism sounded a lot like any other European welfare state. 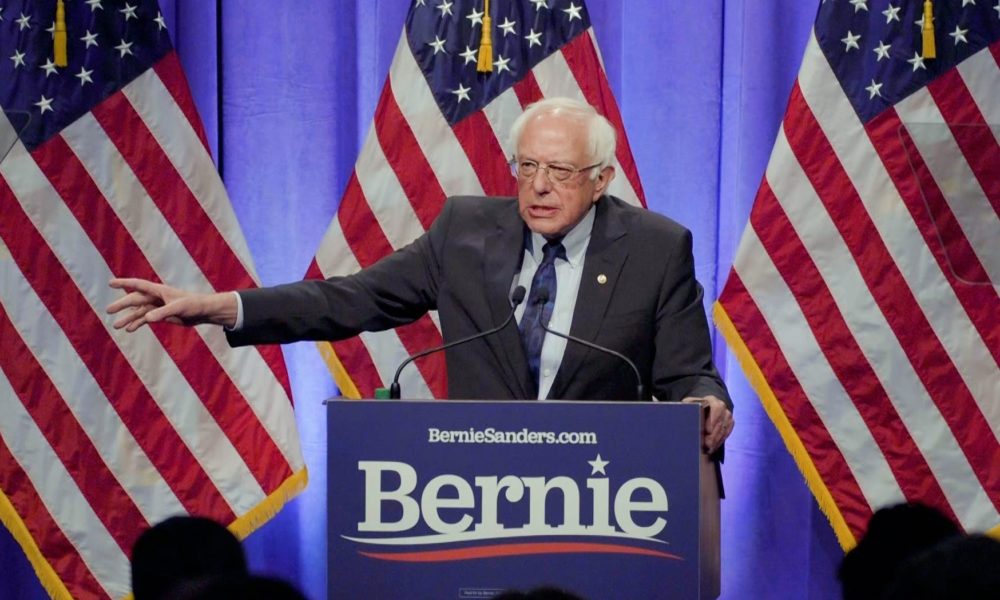 Bernie Sanders is the most progressive of all current presidential candidates. His platform stands out as a comprehensive bundle of pro-working class policies, from Medicare for All, to $15 minimum wage, to tuition-free college. He also stands out as the only candidate who calls himself a (democratic) socialist, and he is often credited with reintroducing the term socialism back into American politics–even though he’s been referring to himself that way for decades. For this reason, there was quite a bit of eager anticipation in the run-up to his  speech on Wednesday where he presented his vision of democratic socialism.

Without a doubt, his use of the socialist label as a Democratic Party front runner has helped de-stigmatize the term “socialism” after decades of red-baiting and anti-communist propaganda. His speech can be interpreted as another effort in this regard. But if you were expecting to hear a speech against capitalist exploitation, or an indictment of the capitalist system as a whole, you may have been disappointed. In fact, there was no actual critique of capitalism as an economic system. The very few times Sanders pronounced the word “capitalism,”it was always carefully preceded by the qualifying term “unfettered.” There were none of the usual allusions to Eugene V. Debs, which seem to have been crowded out by the 14 references to FDR, and Sanders very clearly and intentionally tied his “vision” of democratic socialism to FDR’s New Deal

Overall, his speech was a call for national unity. The main evil of our times, he claimed, is “oligarchy and authoritarianism,” a point that was emphasized several times during his speech: Vladimir Putin, Xi Jinping, Mohammed Bin Salman, Rodrigo Duterte, Jair Bolsonaro and Viktor Orban. For Sanders, all of these figures, along with Trump belong, in this category  of oligarchs who are not unlike 20th century fascism, and, therefore, the task of the day is to fight against them–all united as a nation: “regardless of race, gender, religion, sexual orientation or country of origin.” This unity, he claimed, is a “quintessentially American idea.”

Scathing critiques of Wall Street, insurance companies, the fossil fuel industry and the military and prison industrial complexes were followed by a pledge to protect political rights, civil rights and economic rights. Then he proceeded to describe his programmatic task: to “take up the unfinished business of the New Deal and carry it to completion.” This includes securing quality health care and free education for everyone, the right to have a “good job with a living wage,” affordable housing, secure retirement and a clean environment.

He described the New Deal as “an economy that worked for all, and not just the few,” with no mention of the fact that the main two bills granting rights for working-class people (the Wagner Act and the Social Security Act) excluded rural and domestic workers, the two occupations where African Americans in the South were strongly overrepresented.

And what did he say about democratic socialism? On two occasions Sanders described what he understands the term democratic socialism to mean. After indicting Trump’s egregious policies against immigrants rights, against reproductive rights, LBTQ+ communities, etc., he called to reject the “path of hatred and divisiveness” and choose “a path of compassion, justice and love. And that is the path that I call democratic socialism.” It’s hard to imagine a more vague definition.

Later on, he equated democratic socialism to basic economic rights: “the right to quality health care, […] education, the right to a good job that pays a living wage, the right to affordable housing, secure retirement, and a clean environment.” All these things are badly needed, and they make up a nice moderate-progressive platform. But however one counts, they don’t add up to socialism. By this moment, the potentially disruptive, rightfully polarizing term “(democratic) socialism” was reduced to just any other welfare regime you can find in many European countries.

This is no accident. Sliding in polls, the Vermont senator understands that he needs to soften his radical edge and increase his “electability.” He stressed that FDR was accused of being a socialist, that Medicare was called a “socialist program” and that even Bill Clinton’s health plan was berated as socialist. Then he approvingly quoted Harry Truman saying that “socialism is the epithet they have hurled at every advance we have made in the last twenty years.” The subtext of all this is clear: don’t fear my label, I am just like them.

Later on in the speech he reminded his audience that FDR faced the opposition of big capital, Wall Street, the Republican Party and the conservative wing of the Democratic Party–just like he does today. The parallel was repeatedly mentioned or implied throughout his speech.

But if this rhetorical artifact was enough to trim away the anti-capitalist edge many read in his politics, a more powerful blow was yet to come. Toward the end of the speech he surprisingly asserted that Trump and his “fellow oligarchs (…) don’t really oppose all kinds of socialism.” In fact, he continued, they “absolutely love corporate socialism.”

If you are confused by the oxymoron “corporate socialism,” it’s not your fault.

He went on to describe how after the 2008 financial meltdown, “Wall Street became big government socialists and begged for the largest federal bailout in American history.”  Big Pharma and the fossil fuel industry, and Amazon and the Waltons, he added, have all benefited from tax cuts and government subsidies. “And that is the difference between Donald Trump and me. He believes in corporate socialism for the rich and powerful. I believe in a democratic socialism that works for the working families of this country.”

The rhetorical maneuver is clear: Insidiously but forcefully, he equated the word socialism to any government policy. Feeding into an extended misconception among Americans (one that consists in considering any public service “socialist”), Bernie Sanders in his nation-wide broadcast speech, stripped  the word socialism of all its meaning.

Let’s be clear: his platform is still the most progressive one among all presidential candidates running in this unbelievably undemocratic electoral system. And the policy proposals he zeroes in on are far from minor tweaks that can be dismissed. However, there are those of us who understand that putting an end to capitalism is the only way to eliminate the real ills of our society: poverty, unemployment, racial segregation, imperialist subjugation, gender oppression and more. In the past ten to fifteen years, the number of people who reject capitalism and favor socialism (regardless of what they understand by this) has multiplied dramatically. Many thousands of them will walk the road with Bernie Sanders and realize that he can provide no solution–only partial fixes–because he provides no alternative to capitalism. This historical process is unavoidable; you can’t skip it. The tragedy, however, is that the largest socialist organization in the U.S.–the DSA–the one that should be leading the endeavor to spread socialist ideas, build anti-capitalist cadre and outline a strategy to overthrow capitalism, is at the moment fully on board the Bernie wagon. Not only is the DSA failing to point out that what Bernie Sanders expounds is not socialism, the organization is also gearing up to go all-out for Bernie in 2020, looking to devote to it more resources than for any other political activity.

We need to be clear about our vision of a socialist society, one without exploitation and oppression. This involves socializing the resources that are now monopolized by the capitalist class–putting all the productive forces at the service of the common good and not to satisfy the greed of a handful of people. Climate change, yawning economic inequalities and the global rise of the far-right demand bold action and a clear definition of our goals. Let’s not begin by compromising.