Sanders Voted for the Latest Corporate Bailout: What This Reveals for Socialists

The U.S. Congress recently passed a $2 trillion bailout package, the largest in U.S. history. Most of the money will go to the wealthiest individuals and corporations. Even though he originally spoke out against it, Bernie Sanders voted for the deal. 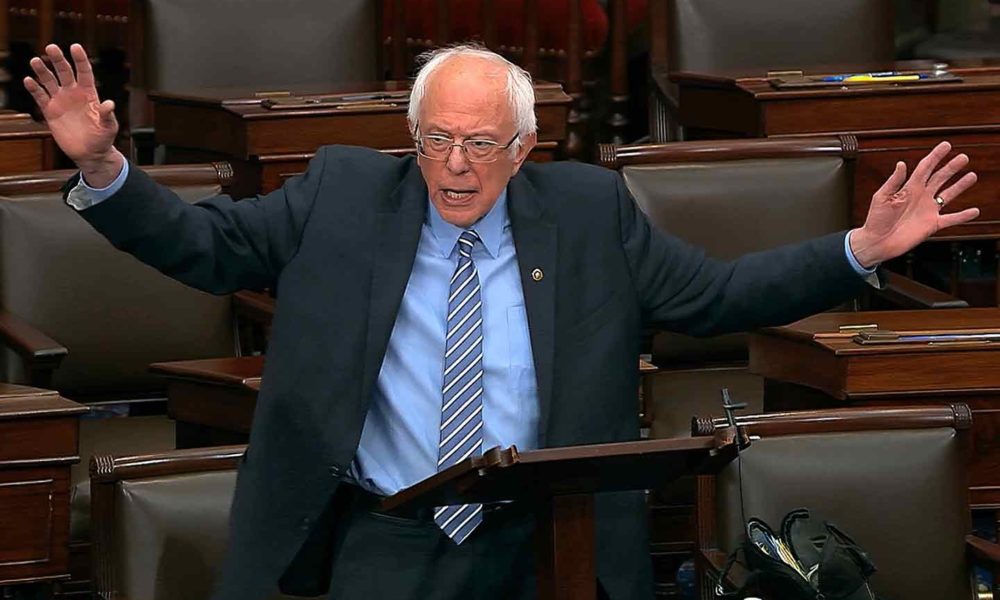 Image from Senate Television via AP

The U.S. death toll from COVID-19 is already 4,000, with the number rising quickly and hospitals bursting at the seams. Healthcare workers do not have the necessary personal protective equipment and areas that are being hit the hardest by coronavrius, such as New York City, are quickly running out of ventilators and ICU beds. Meanwhile, the number of people in the United States who are unemployed has reached 10 million, and those are just the official statistics that exclude undocumented and gig workers.

April 1 has just passed and we’re all still expected to pay our rent. For the millions of people who live paycheck to paycheck, there won’t be enough money for that. In fact, there won’t be enough money for food. The markets had their biggest drop in history, the capitalist suffering losses there are going to push them onto working people, and now it is undeniable that we are heading for a global recession.

The situation is catastrophic and getting worse — and this in the wealthiest country in the world.

In an attempt to stimulate the flailing economy, the U.S. Congress recently passed a massive $2 trillion stimulus bill. In fact, it’s the biggest bailout the capitalists have gotten in all of U.S. history. Here are some of the bill’s highlights (or lowlights):

Simply put, in the midst of the most catastrophic situation in any of our lifetimes, the United States government will transfer an unprecedented amount of money to businesses, specifically Big Business. And even with this huge bailout, companies such as United Airlines still plan to layoff workers.

What is called the CARES Act has two important provisions for some working class people: an extension of unemployment benefits, along with an important change — a $600 weekly increase, for four months, which would also include gig and tipped workers; and a one-time $1,200 check to people who filed taxes last year and make less than $75,000 a year. For those who make up to $99,000, payments are still available but will be less. But it may take up to 5 months for some people to receive their one-time payments.

Given the scale of the crisis, this is insufficient: $1,200 is hardly enough to cover rent for one month, much less food, bills, and other essentials. With at least 6.6 million out of work and more layoffs on the horizon, we needed massive aid for the working class.

What’s worse is that millions of people will have no access to these unemployment benefits or the checks. To begin with, there’s not a penny for the 12 million undocumented immigrants, and not even mixed status families will receive these $1,200 payment. Likewise, people who work off the books — nannies, sex workers, and other gig workers, for instance — won’t get these checks. People over age 18 who were still claimed as a dependent by parents won’t get a check.

In other words, massive swaths of the working class won’t have access to an already woefully insufficient amount of help.

Representatives of the Capitalist Class

Few are surprised that the Republicans, who make no secret of who they represent, are using the crisis to increase corporate profits; after all, the Trump tax cuts in  2017 were a gigantic handout to the wealthiest.

People also shouldn’t be surprised that the Democrats have acted to bail out the corporations; after all, the Obama administration did that in 2008 with the massive Wall Street bailout. The two parties of capitalism have joined forces once again.

Sure, the Democrats made a spectacle of opposing this most recent giveaway after Elizabeth Warren began publicly denouncing it. That halted the first draft of the bill and gave the Democrats some time to pretend they’re on the side of working-class people. But despite their posturing, the Democrats didn’t touch the corporate slush fund; they just added some minimal federal oversight to the bill — oversight Donald Trump has already said he intends to ignore. They weren’t opposed to the corporate bailout, just some of the small print.

Passage of this bill unmasks both parties once again. The Republicans and the Democrats represent the capitalists. They’re more than willing to leave behind the working class, even in the midst of a pandemic. They could have passed sweeping protections, canceled rent and student loan payments, frozen layoffs, created and fully funded universal health care, and given everyone a quarantine wage. But instead they spent $2 trillion mostly bailing out the rich.

Don’t forget that the government doesn’t actually have its own money. Every cent of that $2 trillion comes from us. Nevertheless, the next time we demand public health care, they will have the gall to claim there isn’t enough money to pay for it. But what this bailout shows is that there is always money — our money — they’re ready to dole out to the capitalists, just like there is always money for war. It isn’t that there isn’t money for progressive reforms, it’s that the government and the capitalists they work for don’t want to spend it on working class people.

Over the past few weeks, Bernie Sanders has been putting forward a more progressive agenda in relation to the coronavirus crisis, including a call for sending $2,000 every month during the crisis to every person living in the United States. He’s had many livestreams with Alexandria Ocasio-Cortez, Ilhan Omar, and Rashida Tlaib, denouncing some of the most terrible aspects of this crisis, such as people incarcerated on Rikers Island in New York City and in immigrant concentration camps being left to die, water shutoffs in Detroit, and more.

They even spoke out against the bailout. Bernie Sanders correctly stated, “We cannot give Trump’s Treasury Department a blank check to bail out the airlines, cruise ships, hotels, and many other industries, while providing next to nothing to help the homeless or the most vulnerable people in this country.”  And Alexandria Ocasio-Cortez said, “The option that we have is to either let [our families] suffer with nothing or to allow this … to contribute to the largest income inequality gap in our future. There should be shame about what was fought for in this bill.”

But in the period leading up to the final bill that was passed, it wasn’t Sanders who halted the vote in the Senate and forced legislators to go back to the drawing board to include a few more protections for the working class. That was Elizabeth Warren. And when it was finally time to vote, the bill passed the Senate unanimously and was opposed in the House by a lone libertarian Republican, Thomas Massie. Sanders and the Squad voted “yes.”

When all is said and done, Bernie Sanders, AOC, Tlaib, Omar, and every other progressive Democrat voted for a bill that they knew was insufficient and benefited the rich.

The Sanderist Strategy is a Dead End

Throughout his career, Bernie Sanders has been attempting to pressure the Democratic Party from the left and perhaps even remake the party as a way to win more concessions for the working class. There was even one point in this year’s presidential campaign when it seemed he might be able to win the Democratic nomination, but he was no match for the opposition organized by the establishment led by Barack Obama and the corporate media. Now he is back to pressuring from the left — and, as his vote demonstrates, pressure that is not all that effective.

Bernie Sanders is the face of the un-resolvable contradiction of trying to pressure the Democratic Party from within: in the end, the party will be more of a force on you than you will be a force on them. Sanders and his allies want to push the Democratic Party to the left and convince them to support progressive measures such Medicare for All. What they’re actually doing is helping keep the Democratic Party alive. In their frequent livestreams, Sanders and the Squad condemn the Trump Administration’s favoring of the rich and talk of the need for protections for the working class, but they never address the Democratic Party’s own categorical failures when it comes to addressing the crisis.

Sander is serving the interests of the ruling class, even if it’s not his specific intent. He’s like a relief valve for the Democratic Party, providing an “acceptable” outlet for working-class rage in the halls of power. If he wasn’t in the race, all the media focus would be on Biden’s silence, and that of Biden’s party. But instead, Sanders’ fiery speeches about the inadequacies of the government response create an illusion that working-class people can feel represented.

Then Sanders turns around and votes for bailing out the rich.

This has always been Bernie Sanders’ strategy. But it shouldn’t be socialists’ strategy.

Nevertheless, the DSA has attempted to separate the unemployment package from the rest of the bill and call it a victory. In its  “DSA Covid-19 Bulletin #5”(March 27), under “Bernie Fights for Us,” the DSA leaders write, “One giant win in the bill is Bernie Sanders’s amendment — a $600 weekly increase in unemployment benefits that includes gig and tipped workers for four months — which passed against a last-minute attack from GOP senators largely because of Bernie’s ferocious defense. Bernie’s influence and power in this particular fight were outsized, and it’s hard to imagine anyone else in the Senate speak so powerfully for the working class.”

There’s not one word of criticism for actually voting for the bill.

Let’s be real and honest with each other, comrades: this deal sucks. Let’s be clear: this bill is not a victory. It’s a loss for the working class. The unemployment benefits don’t make up for the massive corporate bailout. This bill shouldn’t be supported.

Left pressure within the Democratic Party isn’t how we are going to win the kind sof reforms we urgently need to save lives. And it’s certainly not the way to achieve socialism. It is the way to get terrible corporate bailouts with a few crumbs for some of the working class.

Workers right now are showing an alternative way forward: just this week, workers at Amazon, Whole Foods, and Instacart walked off their jobs, demanding safer working conditions. At a General Electric factory outside Boston, workers staged protests demanding that the facility be shifted from making airplane engines to making much-needed ventilators. Nurses and other frontline workers in New York City are staging actions to demand better conditions and the equipment they desperately need to fight the virus.

The working class has the power to solve the crisis that capitalism created but has shown itself incapable of solving.

The Bernie Sanders strategy shifts the fight from the streets to the halls of power. All that does is build the Democratic Party, perhaps push it ever so slightly to the left on this or that particular issue, and continue to sow big illusions about how we will actually change this miserable capitalist system. That strategy has brought  us to where we are right now. If ever there was a time to reject that strategy, that time is also now. It is a dead end and we can do better.