Sanders, Warren Crush Opponents on Healthcare. On Immigration and Racism, Not So Much

Despite attacks, Sanders and Warren crushed their opponents in yesterday’s debate, making an especially progressive argument for Medicare for All. However, on immigration and on race, Warren and Sanders left a lot to be desired. 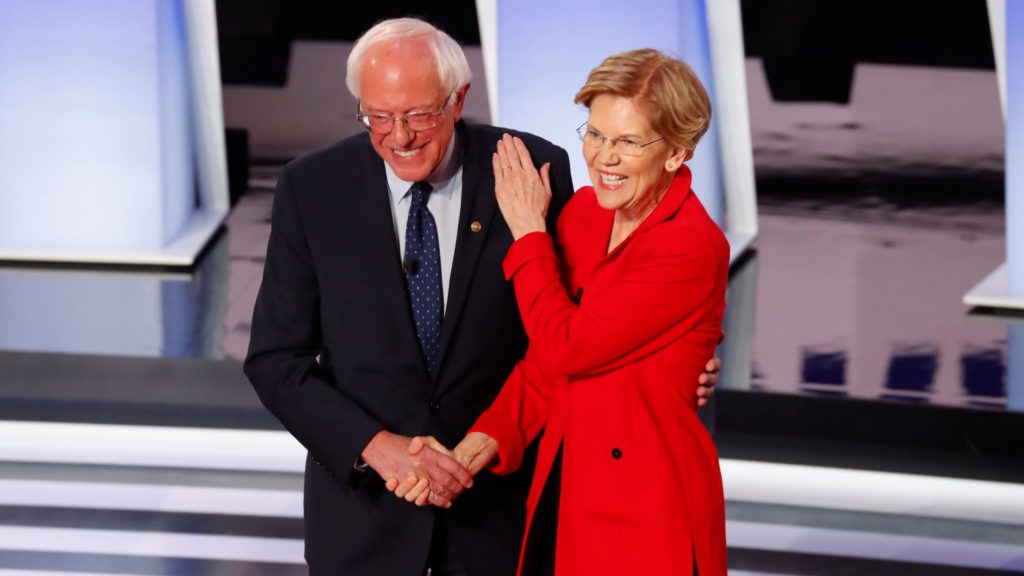 Yesterday, Bernie Sanders and Elizabeth Warren demolished the right-wing Democrats. Whoever changed John Delaney’s Wikipedia page to read that he was killed on the Democratic Party debate stage by Elizabeth Warren wasn’t wrong.

There was clearly a united front between the other Democrats against both Warren and Sanders. On the front lines of this attack was John Delaney, whose worth is more than $65 million, as well as other-right wing Democrats like Tim Ryan and John Hickenlooper. They were aided by CNN anchors who gave lots of air time to candidates polling at less than 1% and asked leading questions that targeted Sanders and Warren. The goal of these attacks was not only to discredit Sanders and Warren but to convince Democratic Party voters that Medicare for All is just too much to ask for and that those kinds of demands would inevitably lead to another four years of Trump.

While some thought that Warren and Sanders would take the opportunity to differentiate themselves from each other, as they were the two front runners on the debate stage, they in fact took the opportunity to show a united front against establishment Democrats. And the truth is that Sanders and Warren killed it.

Warren took on the “no we can’t” mentality of the right-wing Democrats head on, with one of the most memorable quotes of the night directed at John Delaney: “I don’t understand why anybody goes to all the trouble of running for president of the United States just to talk about what we really can’t do and shouldn’t fight for.”

And that was just the beginning. The right wing of the Democratic Party looked absurd.

“Medicare for all will hurt unionized workers who already have health insurance,” said the right-wing Democrats over and over again.

“I’m trying to explain that these union members are losing their jobs. Their wages have been stagnant, the world is crumbling around them-the only thing they have is possibly really good healthcare,” Tim Ryan said.

Sanders had a good response: “Many of our union brothers and sisters, nobody more pro-union than me up here, are now paying high deductibles and copayments. When we do Medicare for all, instead of having the company putting money into healthcare, they can get decent wage increases, which they’re not getting today.”

Surely union members will be positively affected by not having co-pays or going into massive medical debt or having life-saving treatment denied because insurance companies want to rake in more profits.

And boy do they profit: As Warren pointed out in the debate, “These insurance companies do not have a God-given right to make $23 billion in profits and suck it out of our healthcare system.”

It’s clear that to fight for Medicare for All, Warren and Sanders will have to fight the Democratic Party establishment and the lobbyists who, as Sanders explained, “have spent $4.5 billion of your health insurance money on lobbying and campaign contributions” to make sure that they remain in business.

Warren and Sanders correctly argued that healthcare is a right. In a global context, this is not even a very radical statement to make. After all, even much poorer countries around the world guarantee healthcare. But in the U.S., it is very progressive and the establishment Democrats will fight tooth and nail not to give it.

These parts of the debate definitely stole the show.

But there were other parts of the debate that I believe we should consider. Doing so may be less exciting because it means criticizing the folks who really stuck it to the insurance companies and the Democratic Party establishment. But I do think it is really important for those of us who identify as socialists, as well as for people concerned about the concentration camps and the epidemic of police violence against people of color, to consider how Sanders and Warren fared on these questions.

This is an exchange that occurred in the debate:

Moderator: Senator Sanders, you want to provide undocumented immigrants free health care and free college. Why won’t this drive even more people to come to the U.S. illegally?

Sanders: Because we’ll have strong border protections. But the main point I want to make is that what Trump is doing through his racism and his xenophobia is demonizing a group of people. And as president, I will end that demonization.

Warren echoed Sanders’ call for border security more than once.

Yes, these supposed left gladiators are in favor of “strong borders”: the borders that separate countless families with a parent sending home money to a child who may or may not ever see their mother or father again. The borders that killed Óscar Alberto Martínez Ramírez and his daughter Valeria. The same “strong borders” that are enforced by a wall voted for by Democrats and Republicans under the Bush administration. The same borders enforced by agents who in a facebook group exhibited the most vile racism against migrants and photoshopped pictures to show fellow progressive Ocasio-Cortez being sexually assaulted. There is no progressive case for borders, and there certainly is no progressive case for “strong borders.” All that means is more border patrol and more walls.

Really, we should have seen this coming. After all, Sanders voted for the border wall in February. To her credit, Elizabeth Warren did not. And in early April Sanders said, “If you open the borders, my God, there’s a lot of poverty in this world, and you’re going to have people from all over the world. And I don’t think that’s something that we can do at this point. Can’t do it. So that is not my position.”

But the fact that we should have seen it coming doesn’t make it any better. The affirmation of “border security” is particularly terrible in the context of Trump’s attacks on immigrants’ rights.

The Democratic Party often attempts to attack Sanders on the question of race. This was one of Hillary Clinton’s favorite ways to criticize Sanders. During her 2016 run, she famously said, “If we broke up the big banks tomorrow, would that end racism? Would that end sexism? Would that end discrimination against the LGBT community? Would that make people feel more welcoming to immigrants overnight?” Of course, Clinton didn’t mention the Crime Bill she supported, or calling Black youth “superpredators.” The idea that Clinton is on the side of people of color is entirely absurd.

It’s hard to think of a more cynical approach from a party that helped build up the prison industrial complex, that sent the national guard to repress Black Lives Matter protestors, and that very clearly has never been on the side of people of color. The Democratic Party establishment doesn’t get to act like the freedom fighters for the oppressed.

But it is also true that Sanders and Warren were woefully inadequate on the question of reparations and racism, nearly indistinguishable from the rest of the pack of Democrats.

Warren correctly called white supremacy domestic terrorism, and both candidates accurately stated that racism is engrained in healthcare, education, and environmental policies. Both spoke about fighting racism by supporting education, with Sanders explicitly talking about segregation and Warren promising more funding for HBCU’s.

Sanders argued that he supports a committee to explore reparations but doesn’t support a check to Black people. He said that “as a result of slavery, and segregation, and the institutional racism we see now in health care, in education, in financial services, we are going to have to focus big time on rebuilding distressed communities in America, including African-American communities.”

Instead of Warren or Sanders, the known progressives in the bunch, it was Williamson who was the most left on this issue, explaining the historic monetary debt owed to Black people.

No one mentioned the prison industrial complex that disproportionately locks up Black folks and incarcerates more people than any other country in the world. No one mentioned the police violence that spurred the Black Lives Matter movement and that has not in any way been abated with time.

And although the debate took place in Michigan, Sanders and Warren did not mention the Flint water crisis at all, much less in connection with the racism that has left the community without safe drinking water for years.

And while it is true that Medicare for All and the Green New Deal will benefit people of color, that is not enough. It is necessary to address the historical and current oppression of Black people specifically. For all their talk of big ideas, Sanders and Warren were indistinguishable from the others on stage on the subject of race.

Response from the Left

Despite these problems, much of the left is celebrating this debate as a total victory. In fact, Bhaskar Sunkara’s piece in the The Guardian doesn’t mention a single shortcoming of Sanders or Warren. In Jacobin, Paul Heideman claims that “the left is winning.” This is an unbelievable position from a socialist publication. Sanders, and even more so Warren, aren’t “the left”: they are the left of the party of Wall Street, borders, and concentration camps.

Certainly, Heideman can’t mean immigrants or Black folks who can hardly feel represented by Sanders or Warren. And he certainly can’t mean the left that is serious about abolishing ICE, opening the borders, and ending the prison industrial complex. This is no position that a socialist should take or endorse. It’s textbook nationalism: it’s cool if Sanders and Warren are weak on oppression and imperialism as long as they are strong on “Medicare for All.” Unfortunately, despite arguing that they will “push Sanders left,” many socialists have taken on the role of acritical cheerleaders.

Without a doubt, the left of the Democratic Party destroyed the right-wing last night. This may not matter when it comes to voting. As the 2016 election showed, the establishment is more than happy to cheat Sanders out of the election, and Sanders is more than willing to accept it.