In a speech given at the international rally of the Trotskyist Fraction this May Day, Scilla Di Pietro, a food service worker and member of the Revolutionary International Fraction (FIR), speaks about how years of neoliberal austerity measures at the hands of the EU and the Italian government has turned the coronavirus pandemic into widespread devastation. She talks about how the efforts and struggles of workers has been central to counterposing the false unity broadcast by the government and capitalists. 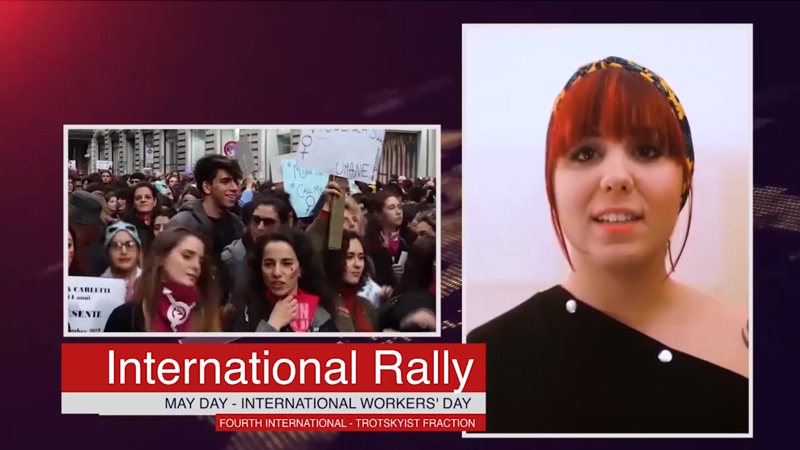 Greetings from Italy to this internationalist action and everyone online.

Italy is one of the countries most affected by the pandemic. According to official figures, we have had more than 200,000 people infected, and the deaths number more than 27,000.

This in a country with one of the world’s best health systems – despite decades of cuts to public health by governments of the center-right and center left.

We found ourselves with a tremendous shortage of hospital beds, without ventilators, without protective equipment, and without the mass testing needed to detect outbreaks.

In Lombardy, the contagion’s epicenter, the city of Bergamo has become the center of a capitalist massacre unleashed by the industrialists as they pushed for facilities to remain open. This caused an unparalleled spread of contagion and a higher proportion of deaths, creating a hell for workers and the elderly population. Old people were mostly left at home to die alone.

Throughout the country, the main measure to fight the virus has been social distancing for millions of people, under police and military control in the streets.

In spite of this, there has been a climate of national unity imposed in Italy, narrowly linked to the country’s new “father,” Prime Minister Conte.

But the workers’ struggle began to break this reactionary front. The workers, beginning with mobilizations and wildcat strikes by the metalworkers and logistics workers, have turned anger into struggle. The fact that workplaces haven’t reopened widely and immediately is not because of the government, but thanks to the workers’ struggle.

During the general strike on March 25th, many doctors and nurses participated with a one-minute strike of their own, asking all the workers to fight for them as well. These workers are an example to the working class around the world.

Women have also been at the forefront of these struggles. In this crisis, women are part of the front lines, along with many other workers. In the sectors most affected by this crisis, the majority of the workers are women – working as nurses, cleaners, and in commercial enterprises.

The organizations of the Italian feminist movement have denounced the fact that women are the most affected in this pandemic because women have to take care of children who are kept home from school – all while they continue to work at home or are still forced to go out to their jobs.

The feminist movement has also denounced the increase in the cases of domestic violence, without the possibility of safe housing. It is something the state must guarantee for all women who are victims of gender-based violence. The state should expropriate empty housing owned by the big landlords, the banks, and the Catholic Church.

The situation of immigrants, especially undocumented immigrants, is also quite serious. Many people have been left without income or must continue to work under extremely precarious conditions.

That is why we demand the payment of quarantine wages!

In recent months, Italy has been an example of a catastrophe – one to which we were led by the policies of a government in the service of the big industrialists and banks.

We must take up the class-struggle fight, and confront the crisis with an independent program for workers, both women and men!