Within the context of intensifying capitalist crisis and class struggle, the extreme right is increasingly mounting threats against progressive figures on the Left. Defeating reactionary violence will require working class hegemony. 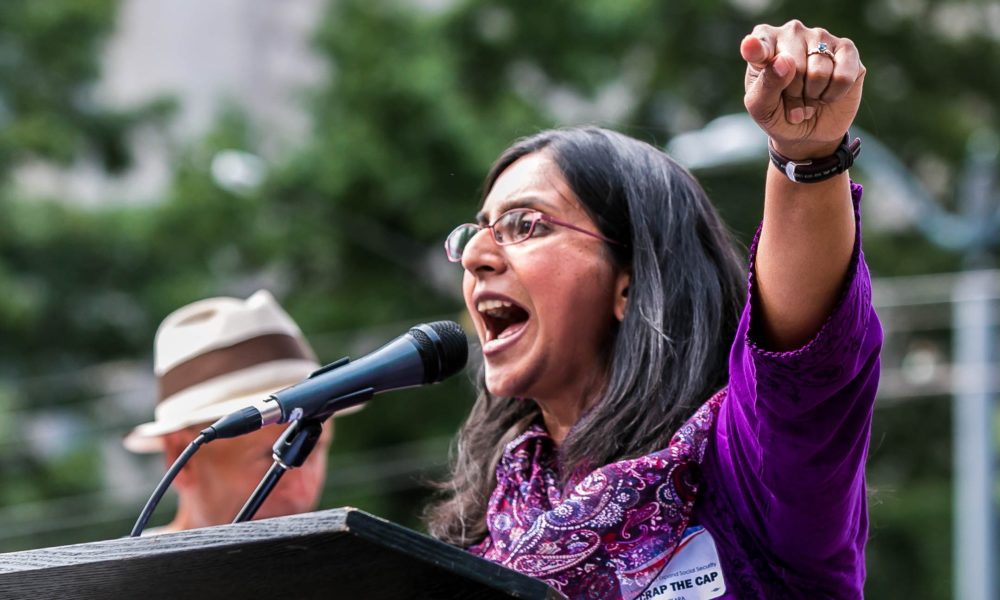 On Wednesday, Seattle City Council member and socialist politician, Kshama Sawant, reported that someone had thrown eggs at the front door of her home and that just days earlier she had received a graphic and disturbing postcard threatening her life. The postcard, a picture of Sawant’s face in the cross hairs of a rifle sight, included the words “Watch your back c***”” written underneath.

Sawant, who ran as an open socialist on the Socialist Alternative ballot line, was elected in 2013, and since then has been an outspoken advocate for a higher minimum wage, affordable housing, and increased taxes on billionaire corporations like Amazon. Sawant was also a vocal supporter of the Capitol HIll Autonomous Zone (CHAZ) — an anti-police demonstration which occupied six blocks of downtown Seattle for more than a month.

In a Facebook post about the threats Sawant was defiant. Claiming that such attacks are in response to the gains that she and other activists have won in Seattle, she wrote: “The right wing is outraged at the impact of socialist politics in Seattle, at the historic Amazon Tax victory, and at the movement to defund the police, leading to an increase in their vile attacks.” While the radical right in Seattle is surely unhappy about such gains, this is not the first time that Sawant has faced death threats. Indeed, just days after her inauguration, Sawant and Democratic Mayor Ed Murray were the subjects of several deeply homophobic, sexist, and anti-socialist online threats, which led to the eventual arrest of the 32 year old Seattle man who had posted them.

The right wing is outraged at the impact of socialist politics in Seattle, at the historic Amazon Tax victory, and at…

And, of course, Sawant is not the only person on the Left to face such attacks. In January of this year, socialist, DSA member, and Democratic Party Virginia legislator Lee Carter was forced into hiding after gun rights advocates threatened to storm the Virginia capitol building. Meanwhile, Alexandria Ocasio Cortez (AOC), the most well-known of the new crop of Democratic Party progressives, has received so many death threats since her election victory that her staff has been forced to conduct visitor risk assessments.

The violence and threats directed at progressive elements in U.S. society, particularly socialists and socialist organizations, has been a weapon of the right wing and the bosses for centuries, but it has re-emerged with renewed vigor since the 2008 economic crisis, with the rise of the Tea Party, and, particularly since the election of Donald Trump. The current wave of uprisings against police violence and the growing popularity of anti-capitalist and socialist ideas are a clear indication of the ongoing organic crisis of capitalism, in which the old world is dying and the new is waiting to be born. The reaction of the ruling class — from Trump and his colleagues in the GOP to leaders of the Democratic Party — has been to openly vilify leftists, arrest protesters on trumped up charges, and use Cold War propaganda to justify imperialist aggression against countries they denounce as “socialist.” The violence we are witnessing against activists and socialists like Sawant is a product of this situation. As the United States continues to sink ever deeper into crisis, it is obvious that such right-wing vigilantism and violent intimidation will increase alongside ever greater state repression.

The irony is that the only way to stop such right-wing violence is to build a strong socialist movement, but the stronger the socialist Left becomes the more it will be attacked — both by the “legitimate” forces of the state and by extrajudicial means. In order to fight this threat socialists and working people everywhere must continue to build the kinds of political organizations and united fronts capable of simultaneously improving the day-to-day lives of working people through class struggle while also building the kinds of organizations needed for the self-governance and protection of workers, people of color, women, immigrants, LGBTQ folks, and all other oppressed peoples.

The right-wing racists and sexists who attack socialism are a threat to all working people everywhere, and particularly socialists, working women, and people of color. Left Voice condemns these violent and sexist attacks on Kshama Sawant and all Leftists everywhere.