Rank and file carpenters are picketing to win labor solidarity and shut down as many sites as possible. But the union leadership has taken a more conservative stance, only sanctioning pickets of some sites for limited hours. 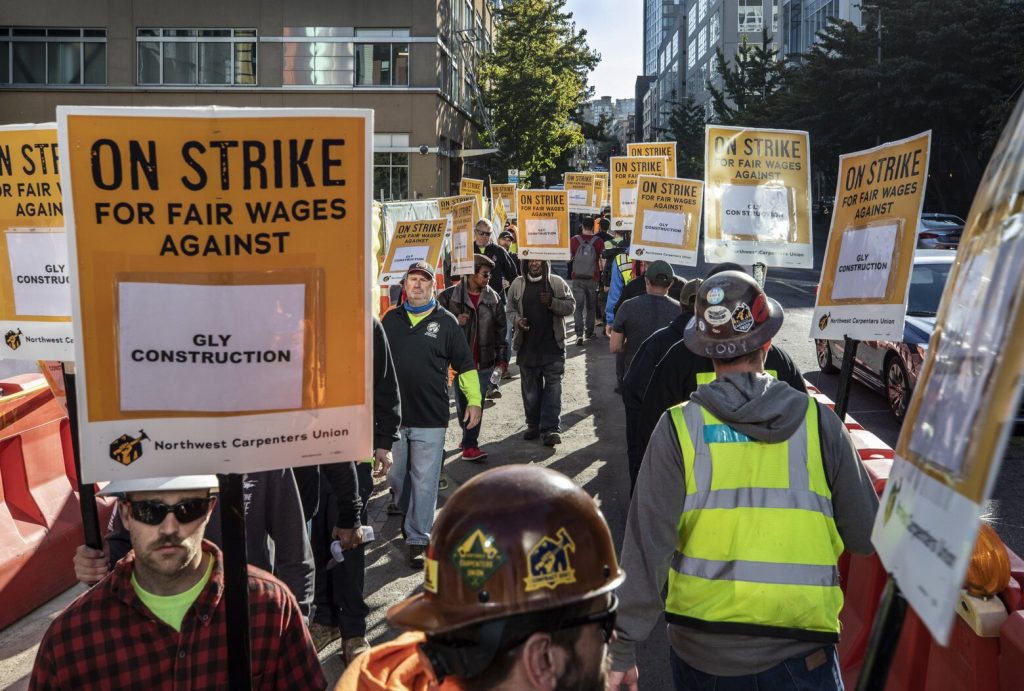 On Sept. 16, carpenters went on strike against the Associated General Contractors (AGC) in the Seattle area. The carpenters had rejected four separate contract offers from the AGC that the union negotiators agreed to. The key issues are better wage increases, more contributions to pensions and health care, and full payment for parking as well as health and safety and freedom from sexual harassment on the job.

The workers want a three-year contract with a $5 per hour raise each year. They also want the company to pay for parking. Right now workers can pay as much as $50 a day for parking. Many of the workers cannot afford to live in Seattle and must commute long distances, sometimes several hours a day. Transportation costs eat up their wages. One worker said that after deducting those costs, he only made $22 per hour.

Even at $46 per hour, carpenters are being priced out of the housing market in Seattle. As carpenter Nina Wurz told a rent control rally on Sept. 18:

“I’m here today because the parallels between the carpenters’ fight for better wages and the struggles of renters in the greater Seattle area are too great to ignore.

“Right now the Carpenters’ Union is on strike for higher wages and better funding of our health-care plan and pensions. Working families fought for a $15 minimum wage in 2014 and are fighting for rent control today. We’re both responding to the same explosion in rent and housing costs in Seattle and in cities all across the country. Home prices here have gone up 93% in the last decade, rents 92%. A marginal annual wage increase is not keeping up with those costs, much less the rising costs of childcare or goods.”

The union leadership has been out of touch with the membership. They continue to agree to inadequate contract offers from the AGC. The last offer was rejected by the members 56% to 44%. It offered just over $ 9 per hour over four years instead of the $15 over three years that members want.

This frustration led dozens of carpenters to form the Peter J. McGuire caucus to push for better offers. This group, named after the founder of the carpenters’ union, has spearheaded picketing since the strike began. The group has wanted to use the full power of the carpenters’ union, win labor solidarity, and shut down as many sites as possible to put maximum pressure on the AGC. The union leadership has taken a more conservative stance, only sanctioning pickets of some sites for limited hours. The leadership has called pickets at non-authorized sites “wildcats.”

This designation is an attempt by the union leaders to impose their more conservative stance. In fact, once the union contract ended after the latest offer was rejected, workers had the legal right to picket any site without a no-strike clause.  Picketing at any of these sites should not have been called wildcats. They should have been sanctioned by the union leadership. It was the union leaders, not the more militant workers who were violating the usual labor rules.

Legal picketing was limited to sites without no-strike clauses, covering only 17% or union carpenters in the area. The owners of several sites signed Project Labor Agreements and other similar contracts. The employers agreed to be bound by the settlements reached with other employers in return for the union agreeing not to strike at the end of a contract. These agreements weaken unions.  If the union can shut down the whole construction industry, it has much more power than only shutting down a few sites. Often employer associations like the AGC will help struck employers weather the strike. This allows them to hold out until the union is more exhausted and weaker.

The fact that the union leaders agreed to Project Labor Agreements, etc. set the union up for failure in the recent contract negotiations. Often, union leaders are more concerned with the maintenance of the union structure and treasury than winning the best deal for the members. No-strike clauses create “labor peace” and lessen the work of union leaders. The McGuire Caucus understands that and has sometimes picketed sites with no-strike clauses.

The other issue that put the carpenters in a bad position was disunity with other unions. The Carpenters Union is not part of the AFL-CIO or the local King County Labor Council. This means that the union leaders had to negotiate with other unions about when and where they could picket out construction sites. The power of one trade picketing a site comes from all the other trades respecting the picket lines and shutting down construction. Without this, any one trade is far weaker.

In the current dispute, the more militant workers picketed sites and appealed to other trades to respect their picket lines. However, without solidarity organized from the top, and without rank-and-file movements in the other trades, the respect of carpenter picket lines was less robust than it could have been.

On Sept. 27, Evelyn Shapiro, leader of the Carpenters’ Joint Council, announced that new agreements had been reached with other construction unions to extend union sanctioned pickets. In particular, she noted that a large Microsoft construction site would be picketed every day. At this writing, it is unclear how much impact this will have.

The strike has been aided by a large amount of labor solidarity. On Sept. 27, over 250 supporters came out to hear union leaders call for solidarity. Most of the workers there were in the building trades, especially carpenters. The Saturday before that, a rally organized by the McGuire caucus and socialist city council member Kshama Sawant drew a similar number. That rally picketed the headquarters of the AGC.

Unfortunately, but typically, Sawant’s support of the strikers has caused controversy in the labor movement. She has allied with the McGuire caucus, endorsing their “wildcat” actions. Union leaders have denounced her for this, calling her an outsider interfering in the labor movement and resorting to the bosses’ favorite divisive tactic, red-baiting. In fact, Sawant is not an outsider. She is a member of the American Federation of Teachers. Ironically, her chief attacker, Nicole Grant, is head of the King County Labor Council (KCLC). The carpenters are not even a member of the Council. The lack of full support from the KCLC is an important factor in weakening the strike. She wrote to Sawant:

“I am writing in regards to your unacceptable behavior as a public official with regard to the Pacific Northwest Carpenters Union strike. Your attempts to lead striking workers directly undermine the democratically elected Carpenters Union leaders who are fighting day and night on behalf of their members.”

“Although community solidarity with striking workers is appreciated, your specific behavior is neither helpful nor appropriate. You are not a carpenter nor are you a union leader. You are a politician. You are completely out of line to insert yourself in a union’s contract negotiation without being asked. Please stop.

Grant went on to say that she had “never seen anything quite this serious in the course of my career, where a small faction of Marxist extremists, with the backing of an elected official, have been able to not just wreak this much havoc inside of a union but been this undermining.”

This open red-baiting by a union official is deplorable and detrimental. Red-baiting is an old tactic by bosses to divide the labor movement. Sometimes it is also used by union leaders to suppress workers who want to fight harder than the union leaders are prepared for.

It is also inaccurate. The majority of union members opposed their leadership and voted down FOUR inadequate contract offers. The union leaders refused to let the members vote until after they rejected the fourth offer. The “small faction of Marxist extremists” actually are reflecting the will of the majority for a decent contract.  In contrast to the labor leaders, 80 rank and file union members sent a letter of appreciation to Sawant for her support. The Peter J. McGuire caucus is made up of members with a wide variety of politics, not a faction of Marxists!

Grant was echoed by Evelyn Shapiro, Secretary Treasurer of the carpenters, referring to Sawant: “We’ve had at least one elected official who’s been a proponent of [wildcat strikes] and encouraging that, and we don’t appreciate that kind of input from politicians.”

This attack has hurt the strike movement. It has divided labor when it needs to be united against the AGC. This attack is unfortunate but is to be expected. The labor leaders are concerned with keeping control of the strike and promoting as much labor peace as possible. They claimed that “wildcat” strikes put the carpenters’ union in financial jeopardy. This was the reason that they called off all official pickets on Friday, Sept. 24. Official pickets started up again on the 27th.  In spite of the attacks on the militants, the pressure of the “ wildcat” strikes forced the union leaders to win more solidarity from other unions. The actions of the McGuire caucus strengthened the strike!

1) When union leaders act in a conservative way, the membership needs to organize independently to demand more militancy. The Peter J. McGuire caucus is a good example of this.

2) Labor peace and no-strike clauses weaken the power of unions. The right to strike allows workers to cut off profits, which is the best way to win demands.

3) Solidarity is key to victory. Unions need to respect each others’ pickets! In fact, all construction workers would be stronger if the craft union model were dropped. ALL construction workers of any trade need to be in the same union! In this way a strike can immediately shut down any job site without negotiations between different trades. Until that happens, all the contracts should be set to expire at the same time, to promote the likelihood of cross-trades strikes. This is one reason militant carpenters want a three-year agreement instead of the four-year agreement offered by AGC.

Due to the organizing of militant workers and the support they are receiving, it now looks like the carpenters will win a better settlement than the offer they just rejected. All workers in the Seattle area should support the carpenters!