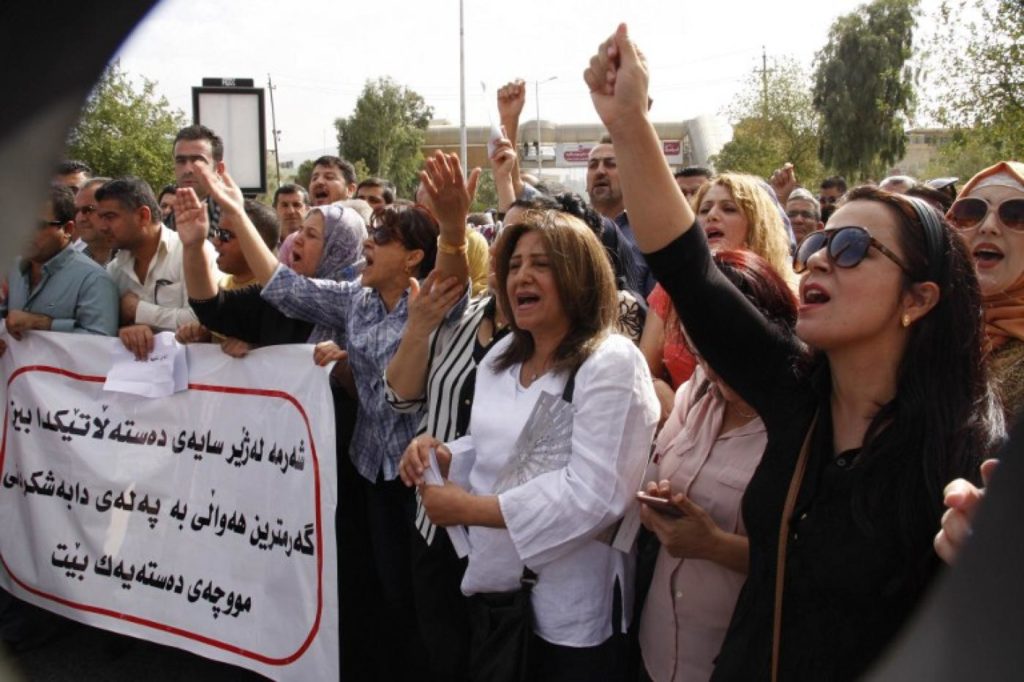 Since December 3, public sector workers, including teachers, from Iraqi Kurdistan, a semi-autonomous region in the north of the country, have been demonstrating for the payment of their salaries and against corruption. Some denounce that they have only been paid four months since the start of the year. The largely peaceful protests in the town of Sulaymaniyah took a dramatic turn last Monday when security forces in the region opened fire on protesters leaving several injured and at least 8 dead. Protesters responded by burning the premises of ruling and opposition parties, police stations, and the mayor’s office.

Following these mobilizations, the local government reduced the speed of the Internet, and even closed a television channel linked to an opposition party. Protesters denounced assaults and live ammunition attacks by security forces linked to ruling political parties. Others denounced the use of tear gas, the power of which caused breathing problems to many protesters, including children.

This brutal repression only fueled popular anger. Anger that resembles the mobilizations that have been taking place for over a year in the south of the country (mainly populated by Shiites) against government corruption, unemployment and poverty. Indeed, as explained by Adil Hassan , a teacher who took part in the Sulaymaniyah mobilizations, “the Kurdish authorities (…) know that if peaceful demonstrations erupt there, the provinces of Erbil and Duhok will soon follow. People live in difficult financial situations.”

The regional government still has to pay the October salaries of nearly 1.3 million of its employees. The critical economic situation in this territory dependent on hydrocarbon exports is partly due to the fall in international oil prices following the measures taken to deal with the Covid-19 pandemic. In this sense, it is possible to affirm that this revolt is a consequence of the economic crisis accelerated by the new coronavirus.

But another reason pointed out by several media is a budgetary dispute between Erbil, capital of the Kurdish region, and the central power in Baghdad. Indeed, the Kurdish government refuses to pass part of the oil revenues through Baghdad and for its part the federal government refuses to pay the budgetary part which corresponds to Erbil. However, some denounce that the oil revenues would be enough to pay the salaries of regional employees but that this delay is mainly due to the corruption of senior officials of the ruling Kurdish parties.

Either way, it is not the living conditions and wages of workers hard hit by the crisis and years of war that matter to federal and regional governments. Remember that for over a year the demonstrators in the south of the country have suffered the same repression. In this sense, faced with this deeply corrupt and reactionary regime, young people and workers from the north and south of the country, beyond religious or ethnic differences, would gain from fighting together.

First published in French on December 9 in Révolution Permanente.