Largely ignored by international media, Hurricane Matthew has left 877 people dead in Haiti. These deaths are not only a product of the hurricane–they are a product of racism, capitalism and imperialism. 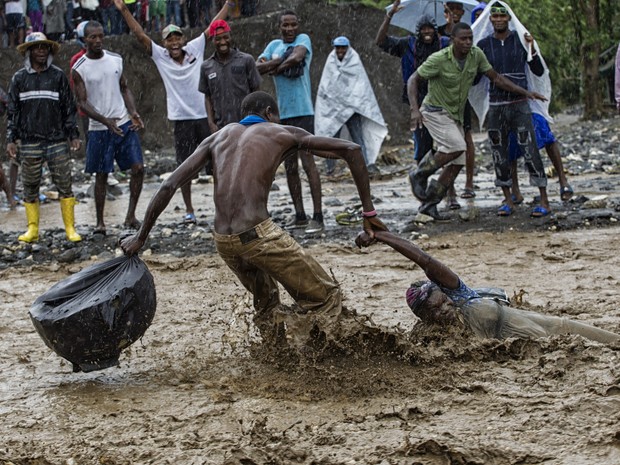 This article was originially written in Portuguese for Esquerda Diario.

We need to talk about the hurricane that devastated Haiti last week. This tragedy, caused by Hurricane Matthew, is tied to racism and imperialism. The almost 900 deaths were not merely costs of a natural disaster. The hundreds of deaths cannot be explained by the fact that Haiti is the poorest country in Central America. This is a capitalist disaster, leaving semi-colonies like Haiti with no infrastructure or safety procedures.

We must begin by remembering the struggles and victories of the people of Haiti, the first Black nation to end slavery and declare itself independent. However, the Haitians were forced to paid a high price for their bold revolution. Slave-holding countries made sure Haiti served as an example for the enslaved and oppressed around the world who dared to follow their footsteps.

Long before the hurricane, France devastated Haiti with the desire for profit and revenge. The colonial power took thousands of francos from the newly-freed country thousands for its independence. For over a century, Haiti has been choked by the United States, which invaded and occupied the island on three occasions since its liberation. Haiti is systemically oppressed because its history is a symbol of resistance for today’s oppressed. This brings us to another question that Hurricane Matthew brings to light.

Hurricane Matthew hit the southwest part of the island with its 145 mph winds, leaving thousands of destroyed houses, flooded cities and almost 900 people dead, totaling half the deaths counted in the wake of Hurricane Katrina in 2005 and ten times those of Hurricane Sandy in 2012.

Despite the high death toll, the mainstream media is more concerned with the possibility of the hurricane encroaching upon Florida than the devastation in Haiti. This selective grief was demonstrated clearly in January 2015. After 12 deaths and 11 injured caused by the attack on Charlie Hebdo in France, there was a strong international solidarity campaign (“Je Suis Charlie Hebdo”). Yet just a few days before, several days of massacre in Nigeria Boko Haram had just come to an end, leaving what Amnesty International estimates to be 2,000 dead. There was little to no international solidarity and very little reporting about it. We cannot ignore this blatant discrepancy. Black Lives Matter, everywhere in the world. Unfortunately, the tragedies that capitalist society grieves over have a color. And that color is not Black.

The human rights organizations, left political parties, labor unions and student groups should organize an active campaign of solidarity for the victims of Hurricane Matthew and denounce the imperialist oppression suffered in that country. Those of us in Brazil loudly declare: Troops out of Haiti! The struggle of our Haitian brothers and sister is also ours!