On Friday May 1 at 2 pm Left Voice will participate in a (virtual) international rally. Here are 7 of the badass speakers. 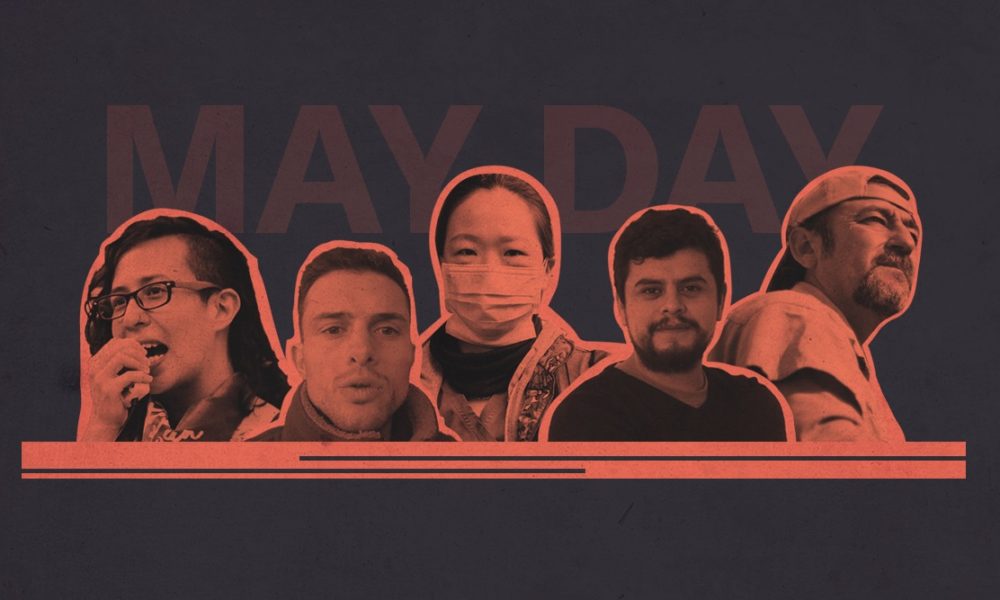 Workers of the world unite! — Karl Marx and Friedrich Engels’s famous slogan from The Communist Manifesto is often used but difficult to live up to. It places internationalism at its core and asserts that the working class has no country and must uncompromisingly fight all national chauvinism. It means being unwaveringly anti-imperialist, opposing both bombs dropped by the U.S. and sanctions held over the heads of working and oppressed people in other countries.

Most importantly, it champions the building of an international organization that is independent from the capitalists and their allies, one that is rooted in the liberation of the global working class.

Left Voice is part of an international network that wants to play a role in building such an organization, in the tradition of Marx, Lenin, Luxembourg and Trotsky. Right now, we have a political party in Argentina, with members in Congress, labor leaders, and socialist feminist leaders of the women’s movement. We also have groups in Brazil, Chile, Mexico, and France, as well as smaller leagues in Uruguay, Peru, Costa Rica, Venezuela, Bolivia, the Spanish State, Germany, and Italy. In the U.S., we have our publication, Left Voice. The publications of our different groups reach over 10 million people around the world, highlighting class struggle and spreading revolutionary politics.

Click here for the virtual May Day Rally at 2 pm on Friday May 1.

But these groups are more than publications: our comrades intervene in class struggle around the world. Whether they are in their unions or in the social movements, they fight with a class perspective, one that puts revolutionary politics to the fore. Today, they are fighting for a solution to the current crisis that empowers the working class and places the responsibility for the crisis squarely on the shoulders of those who created it: the capitalists and their governments. These leaders will present at our international virtual rally this May Day in celebration of International Workers’ Day. Here are seven of the speakers at the rally. 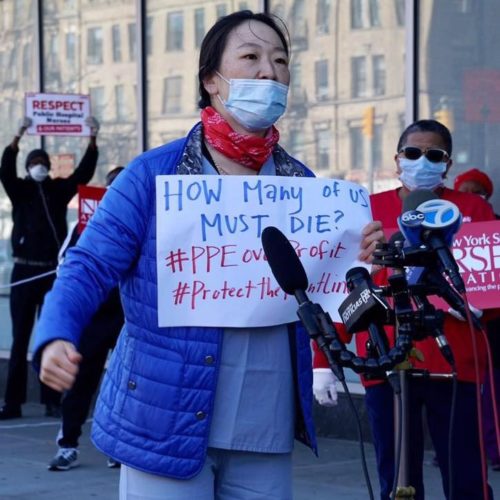 “We’re interchangeable and disposable in the view of a lot of the folks who are safe in their luxury condos during the pandemic…We’re fighting for our lives, meaning we need to fundamentally transform the health care system, take it out of the interests of bosses, basically capitalists, pharmaceuticals, insurance companies, hospital corporations.”
– Tre Kwon in Teen Vogue

Tre Kwon is a rank and file nurse, mother to a newborn baby, and a revolutionary socialist. She was on maternity leave when the pandemic began and went back to work early alongside her co-workers to help fight against the public health crisis. She and other nurses helped form a Health and Safety Committee, organizing actions around New York City and speaking out against Donald Trump’s completely criminal mishandling of the crisis. While Andrew Cuomo is being lauded as a hero and becoming the darling of the Democratic Party, Tre is speaking out against Cuomo, who has under-funded and under-staffed healthcare in New York City for years. She’s been featured on Democracy Now!, Teen Vogue, BBC, CBS and more, talking about the need to nationalize healthcare under worker control. 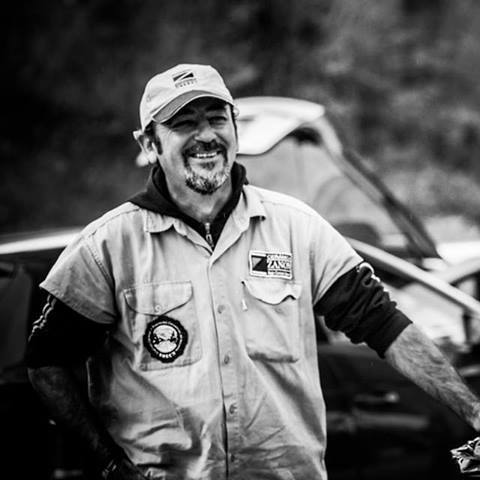 “This factory does not only produce tiles; it has produced free men and women. This small example, that we have contributed to, from this little place in Patagonia, has shown thousands of compañeros and compañeras around the world just what we, as workers, are capable of doing. Those that run the world, we can stop them. And we can rebuild it on different foundations, not on the foundation of exploitation. For the benefit of all humanity, and not just for the few.”
– Raul Godoy

Raul Godoy is one of the leaders of the Socialist Workers Party in Argentina (PTS). He works in a ceramics factory that was occupied and began producing under workers’ control in 2001. The factory workers faced off against the police, making ceramic balls to use in slingshots when the police threatened to storm the factory. They had massive community support, starting with the neighboring Indigenous community, as well as with other sectors of population. When the cops were going to evict them, healthcare workers swore that they wouldn’t help cops injured in the fight against Zanon, and throughout the struggle, imprisoned people engaged in actions of solidarity. When Zanon workers were able to take over the factory, it became the center for community activism, hosting conferences and “concerts without cops” for the community. Part of this process was featured in the documentary The Take by Naomi Klein.

Raul Godoy was later elected as a provincial congressman for the province of Neuquen. He took no more than a teacher’s salary and donated the rest to workers’ struggles. The same applies for all other members of the electoral coalition that the PTS is part of, the Workers Left Front — Unity (FIT-U). When Godoy completed his term in the congress, he went back to his job at Zanon, working at the ceramics factory. 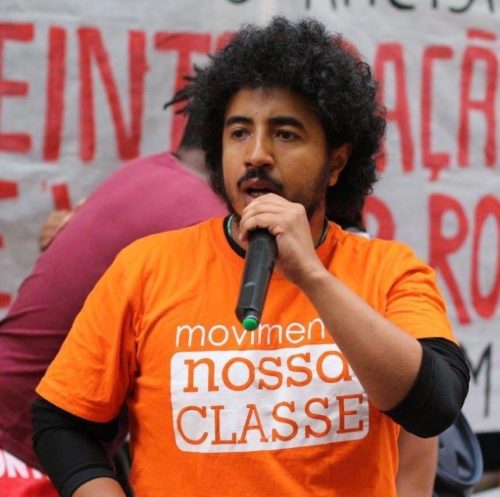 “Just as Black Haitians defeated Napoleon to gain independence and free themselves from slavery, the working class of the 21st century must take political power and defeat the racist bourgeoisie so a new society can be built.”
– Marcello Pabltio

Pablito is one of the leaders of the MRT and a leader of the MRT’s Afro-socialist group, quilombo vermelho. Quilombos were escaped slave communities in Brazil, sometimes numbering thousands, used as bastions from which to attack slaveowners in order to free slaves. Quilombo vermelho takes up this history of struggle, alongside Marxist theory and a history of working class struggle around the world, calling for the unity of workers of all races to fight racism and all forms of oppression, and to destroy capitalism. Pablito is one of the co- authors of a book entitled “Revolution and Black Liberation” about the history of Black struggle in Brazil from a Marxist perspective.  The prologue to the book is here. This is particularly important because Bolsonaro is President, increasing racism against Black people, increasing police brutality and lowering wages for Brazil’s mostly Black working class.

Pablito is not just an afro-socialist leader; he is a cafeteria worker at Sao Paulo University Hospital. He has organized workshops about Black history and encouraged the union to take action against trans femicide in Sao Paulo. 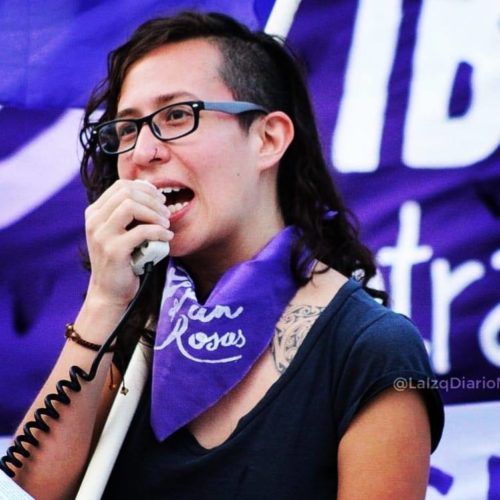 “Precarious work is not normal. We should not wake up every end of the month not knowing if we will have a job tomorrow, borrowing money every time we get sick or our family gets sick, because we don’t have health services and get paid three months late.”
– Flora Aco

Flora is a 25 year old queer socialist feminist from Mexico and a leader in the MTS. Last year, when she was working for the federal government as a subcontracted and precarious worker, she was fired for organizing her co-workers to fight the terrible conditions at her job. After months of struggle alongside two of her comrades who were also fired, Flora was re-hired.

The struggle to be re-hired highlighted the new reality in Mexico: although Andres Manuel Lopes Obrador touted himself as Mexico’s new progressive President, in reality, workers are being fired and attempts to fight for labor rights are being stifled. 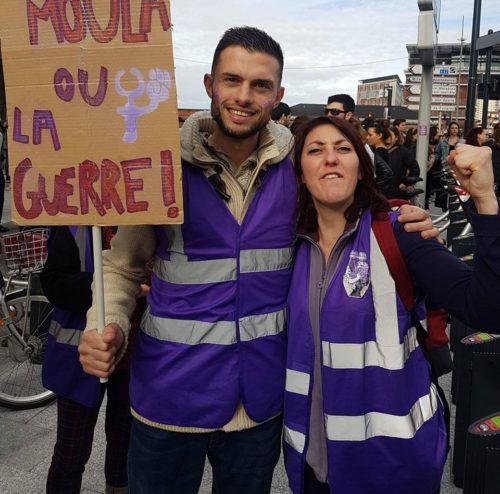 “ Even in a tough factory, even when you start from scratch, even when it seems “impossible.” Workers never accept being treated like animals forever. Sooner or later, we bite back.”
– Gaëtan Gracia

Gaëtan works at a supplier for Airbus in Toulouse. He is a subcontracted worker who is still being required to show up to work despite all “non-essential” work being cancelled. Somehow, low wage aeronautical workers are deemed essential. He said, “Aeronautics workers couldn’t understand why as many people as possible were strongly encouraged to stay home, including by closing down certain sectors of activity, while they themselves were forced to go to work and produce goods that are of no urgent use in confronting the pandemic. This contradiction turned to anger, and this anger was expressed in exercising our collective right of withdrawal and even some walkouts. “

Gaëtan played a role in organizing a union at his job and is now a delegate to the CGT for his workplace. He is a member of the CCR, a current within the New Anti Capitalist Party and an editor for Left Voice’s sister site, Permanent Revolution. 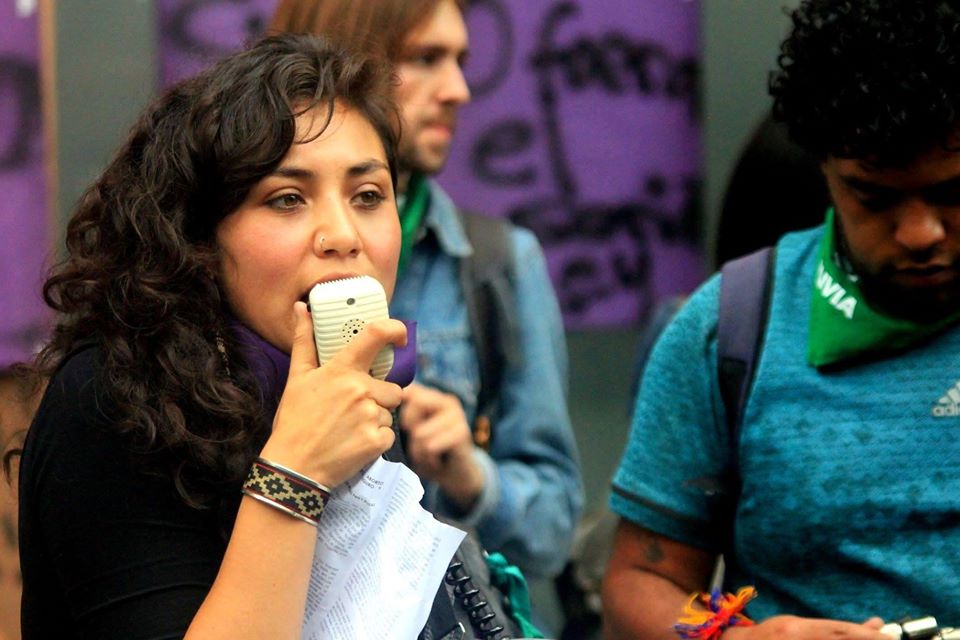 “The coup is against the peasant movement, the workers, the indigenous peoples, the student movement, the rights won by women and LGBT people; the conquests that we have been defending for years, also against the MAS government, today face enormous and greater dangers.”
– Violeta Tamayo

Violeta is a socialist feminist from Bolivia who is actively fighting the right wing coup and fighting for socialism. She was arrested twice, once in 2016 and once in 2017, including at a protest by women living in the town of Achacachi who were fighting corruption and the lack of infrastructure. She says, “Far from socialism, Evo Morales encouraged capitalist profits and strengthened the right and the businesses, who for years have been great friends of Evo. He attacked and violated the self-determination of the Indigenous people, as well as attacking the student movement. I have been arrested two times under the MAS government for mobilizing.” She is a leader of the socialist feminist group, Pan y Rosas (Bread and Roses) and is currently one of the main editors for La Izquierda Diario Bolivia. The role of a left press in Bolivia is especially important right now, as there is a media blackout of resistance to the coup.

“Many [co-workers] give up and let things take their course, hoping for a bit of luck, in all the misery the bosses throw at us. However, in certain circumstances, growing discontent leads us to seek a way to defend ourselves as workers, new possibilities are developed to strengthen solidarity, raise class consciousness and carry out a struggle against our exploiters.”
– Lester Calderon

Lester is an industrial worker in Antofagasta in an explosives factory and is a leader of the national confederation of metalworkers. During the recent Chilean uprising, he helped organize the Emergency and Protection Committees, bodies of rank and file and community self-organization. In these spaces, workers discussed how to put forward the fight against President Pinera, as well as the fight for a Constituent Assembly

There are other speakers from around the world who will also speak at the May Day rally, including leaders from groups in German, Venezuela, Costa Rica, Peru, Uruguay, Italy and the Spanish State.