Seven years after the fall of Ben Ali, Tunisians continue to take to the streets

Since the beginning of the week, the protests in Tunisia have multiplied. The underlying reason is the austerity budget, announced on January 1 in a country already ravaged by the rise of precarious work and unemployment. In the last seven years, the economic situation has become progressively worse. Friday’s protests were smaller than those of the previous few days, but the police crackdown was just as brutal. More protests are planned for Sunday, the seventh anniversary of the fall of Ben Ali. 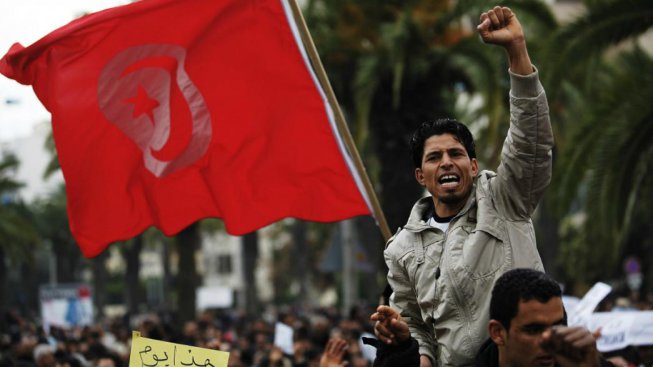 This article was originally published in Revolution Permanente

Although the economic situation has worsened since the fall of Ben Ali, the ex-president of Tunisia, on January 14, 2011, the perspective of the social opposition is that no major changes have occurred. Their demands still focus on employment, the level of development of public services and industry, and more broadly, on social justice and civil liberties. Seven years after the revolution, the groups most under attack in Tunisia, especially the youth, are waging a fierce struggle that may have consequences for all the workers of the Maghreb region of Africa if it manages to push back the government and its austerity laws.

This is a massive movement, much more important than the various other struggles that have shaken Tunisia in the past few years. Tension and social protest seem to have reached a breaking point. It has crystallized around the adoption of the 2018 budget law which brings an increase in VAT, new taxes, and therefore a hike in the cost of living. The government is thus tightening its austerity policies even as the country is already marked by rampant inflation, which, according to experts, exceeded 6 percent at the end of 2017 and may reach 8 percent in 2018.

The IMF has tightened the grip on the Tunisian state. It has restricted the last 2.4 billion euro tranche of its four-year loan to the reduction of the public deficit. Although the government calls for patience and constraint, the situation is no longer sustainable for Tunisian society — the youth, including university graduates, are hit by an unemployment rate of around 30 percent, the middle class is on the verge of disappearing, and the dinar keeps depreciating, already having lost 40 percent of its value.

Unlike the previous protests, which were more local in character, the current movement is national in scale and affects the entire territory, from the underdeveloped towns in the interior to certain coastal cities as well as the popular suburbs of the capital. This is due to the new budget law, which hits the popular and middle classes hard without touching upon the privileged classes — they continue to pay very little in taxes and continue to hold the reins of power.

In addition, the rupture between the new regime and the working people is growing wider. The Tunisian political regime is increasingly concentrating power into the hands of the executive due to the active efforts of the head of state, Beji Caid Essebsi. The ruling coalition formed by the Nidaa Tounes (“modernist”) and Ennahda (Islamist) parties share the spoils of the state. No government since the 2011 revolution has fought against corruption or for social justice, and these strong demands of the revolution have remained unfulfilled.

The politicians do nothing to resolve the catastrophic economic and social situation and are instead involved in power games and electoral calculations. This gap aggravates the profound political distrust felt by the overwhelming majority of Tunisians, especially since the municipal elections — postponed many times after the revolution — will be finally held in May.

In spite of this widespread resentment, only 200 demonstrators gathered in the rain at the center of Tunis, to show a yellow card to the government, using a reference to soccer to send the message that they are only one warning away from being “taken off the field.”. The call was issued by the Fech Nestannew (“What Are We Waiting For?”) movement, which initiated protests against inflation at the beginning of the year. In the city of Sfax, about 200 people marched amidst heavy police presence, holding placards that read, “The people’s money is in the palaces, the people’s children are in the prisons.” Recent events clearly show that the demands for social progress expressed in 2011 have yet to be met. They remain urgent seven years later.

Another reason for this half-hearted mobilization was heavy-handed repression. The current regime, which has made no profound changes to Tunisian society or the economy, has kept intact its apparatus of repression. According to Tunisian authorities, 780 people were arrested on Friday. The Islamists of Ennahda and a section of Nidaa Tounes (the party of Beji Caid Essebsi and the head of the government) blame the Popular Front — a coalition of left and center-left parties — for the revolt. As is the case of every mass protest, the Tunisian government has not missed this opportunity to tighten the screws on the left, and several leftists have been arrested in recent days. The Popular Front reported on its Facebook page that three of its local leaders were released in Gafsa on Friday, a day after their arrest for incitement to revolt.

Nevertheless, the Tunisian government has not had the last word. Several organizations, including the Popular Front and the powerful trade union confederation UGTT, have called demonstrations across Tunisia for Sunday, January 14, to mark the seventh anniversary of the fall of Ben Ali, the dictator toppled by the revolution of the Tunisian people. Although they have since seen their victory hijacked, they have not given up their demand for emancipation.