A nurse talks about vile encounters with managers and sexist norms on the job. 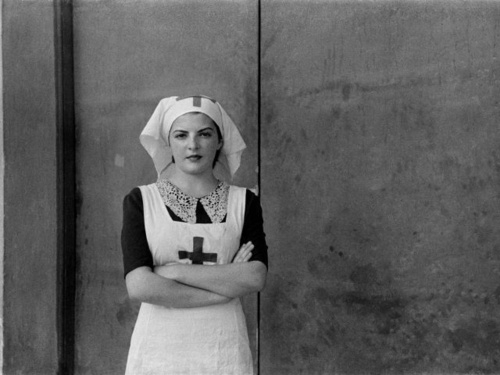 “Tell me how you’ll take care of me better than my wife ever can.”

My body stiffened to breaking point. Bilious ire churned inside my guts and I felt heat creep up the back of my neck. I peered at him past a curtain of bangs. He was leaning toward me, lips curled derisively, unblinking eyes roaming my face.

He prodded, “It has nothing to do with sex. Let’s say I’m a patient here. How would you make sure to take care of me better than my wife, who I’ve been with for over 15 years?”

The AC buzzed behind Mr. Abdul’s head. A poster on the wall to my right read, “Nursing is a passion,” with Florence Nightingale pictured in starched, spotless white, her hands gingerly touching the forehead of a young man on a cot. Straight ahead of me was a bookshelf full of uncoordinated ornaments. Crane-shaped jar filled with colorful sand. Postcard from St. Lucia.

“You don’t know the answer? Because you can’t. You can’t take care of me better than her. Because nursing isn’t about knowledge or skills. It’s love. It’s an art–” An insistent knock interrupted. A woman with mahogany skin and round cheeks wearing teal scrubs cracked open the door.

“Excuse me, Mr. Abdul?” She squeaked, “I just wanted to drop off my resume.”

He stood grandly from his black leather seat and moved to the door, stepping outside and shutting the door behind him. Returning a few seconds later, he sniggered and flicked a thumb toward the door, where the woman’s shadow still lay.

“See? There are dozens of girls who come to me, begging for this job, but they don’t know what it’s really about. She’s a nurse for a few years already, so she’s already tainted with bad habits. That’s why I like the fresh ones sometimes.”

Blood pulsed in my ears, his voice became distant and I felt my soul evaporate in the air above our heads. He went on for what must have been 20 minutes about the lackluster RNs who offended the profession. There was a pause and it was apparent that he was finished with me, so I stood stiffly, shook his hand, and left.

Stumbling down the sidewalk, the Bronx August air plastic-wrapped my blazer. Angry tears rushed down my chin. I wanted to turn back and rip that fool apart, snatch my fancy-paper resume on his desk, crush it in my fist and spit in his face. It was my first interview for a job out of nursing school. I was six months out of work and collection agencies plundered my paltry savings. I needed the job – any job. Back in the suffocating interrogation room, he established his power over me before I’d even clocked in on my first shift. He made it known that he was watching me, comfortable as I was not. His first remarks had been, fittingly, “Why are you sitting like that? You’re so stiff. Relax!” He ordered me to lean back. He ordered me.

I was bargaining with the devil over the terms of a forever-unequal relationship. Eventually, I would give a nod and thanks, turn in my I-9, and trade in my self-respect. I’d drop my carefully mortared barriers against relentlessly mundane sexism and racism; serving to please/quiet patients, family members, and meet management metrics at any cost to self. There’d be no stealing from the boss or failing responsibilities by taking breaks. I would surrender to mandatory overtime during snowstorms to care for 12 patients at once. I’d pull my back, trip over IV poles, sprain my fingers, get stuck by needles and pull compression stockings over swollen ankles. My body would buck against 11 hours on my feet and stifling hunger with graham crackers from the patients’ snack pantry. I’d surrender to innumerable tasks and give up a bulk of my “days off” to recover from the annihilating days on. I’d seek solace and release in psychotherapy, yoga, mind-numbing TV, lots of red wine, and–every so often–choking sobs in my partner’s arms.

For a purportedly stable job as union nurse.

The same afternoon, I got a call and picked up to a saccharine greeting from the HR lady. “Ms. Nam, the unit manager was delighted with you. We’ll be sending you an employment verification form, so look out for that and send your response quickly. I’ll have an offer ready for you in the next few days.”

I never expected to have a good boss. I’d kissed that notion goodbye after my first go at a waged job, fourteen and working at a corporate sneaker chain store in the mall for a 30-something man named Bilal. Every so often, he’d remark about my clothes, my “cute freckles” and how I was “gonna start some R. Kelly shit up in here.” I got looser-fitting khakis and avoided his presence. The worker’s break room had a yellowed poster with a 1-800 hotline for employees who experienced sexual harassment, half-hidden behind a mop and coat hanger. It never occurred to me to call.

On my birthday, my friends surprised me at work with a Victoria’s Secret bag and some cupcakes. The store had a policy of checking employees upon leaving the store. After we closed up, Bilal told me to show him the contents of the pink-and-white striped bag. He pawed through the lace and periwinkle silk and gave me a stare.

I stopped going to work. My dad noticed and told me it wasn’t a good look to quit so fast. I told him the manager was an asshole and the money was shit. He replied, “You’ll never find a good boss or an easy way to make money.

Now, about two years into working as a nurse, I know that persistent shaming and the internalization of sexist norms are entirely operative in nursing. Emotionally and physically brutal conditions are predominant and enforced by healthcare organizations and management.

Constantly creating new management positions (what the hell does that one do?), executive bonuses, branding and marketing, and monopolistic mergers, the mammoth hospitals systematically employ a skeletal nursing staff that is–surprise, surprise–more immigrant, of color, and feminized than almost any other sector. With barely enough staff, sicker patients, and more and more demands, we get beat up, experience more occupational trauma, back injuries, and daily sexual harassment than other industry. The demure bend in Florence Nightingale’s nape on that poster in Abdul’s office was not a suggestion, but a mandate.

In a #MeToo era, it’s far from shocking that we’re expected to put up with this shit, but still not okay.

When people ask what I do for a living and I answer tersely, “Nurse,” one of my top ten most-irritating reactions is, “Oh! Nurses are angels!” The yoke around my neck cinches even tighter, and I usually lash out with, “Most of us are pretty mean, creeping towards evil. And nine times out of ten, we’re prolonging suffering.” Trying to piece together those protective walls.

*Some names and details have been altered.

Kyu Nam is a nurse in New York City. Her interests include debasing management, usurping the labor bureaucracy, and creating a new world order.