Yeon Hong is a labor activist and member of the Militants for Workers’ Liberation (NoHeTu) based in Seoul, South Korea. This article was originally presented at the event, “Class Struggle in South Korea,” which took place on November 5 in New York City. 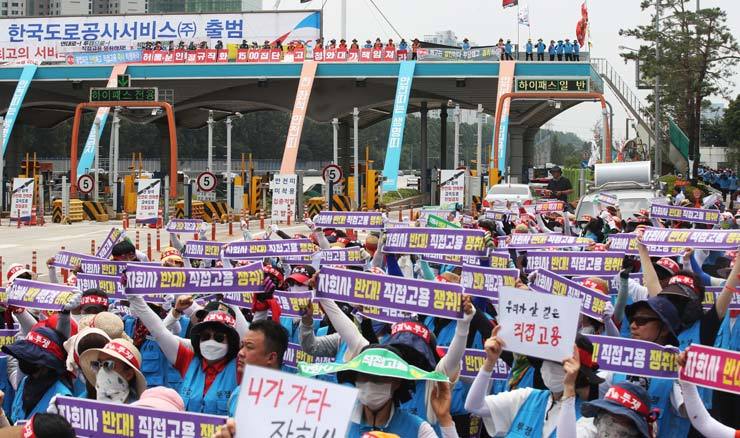 The energy of the candle light protests was amazing. People gathered, chanted, marched, and spoke at open mics in the streets. Tens, hundreds of thousands of people rallied; at its height, perhaps one to two million people gathered. As a result, President Park Geun-hye, the symbol of corruption, was impeached on March 10, 2017.

Later, one National Assembly member in the ruling conservative party announced in the media that he agreed with impeachment for fear that if not, protests would only get bigger. Thus, the simple truth was verified again that, if we want to change the world even a little bit, we should threaten the rulers by saying, “If you don’t step down, you will lose more.”

Although the resignation of President Park was the main common demand, there was great dissatisfaction and rage against the whole system, beyond the rage against just a specific person. There were many people at the open-mic, such as high-school students demanding political rights, youth demanding solutions to unemployment, workers speaking about the pains and problems in their workplaces. This shows that accumulated social contradictions explode with specific opportunities. Something similar is happening with the struggle that erupted recently in Chile.

For this struggle to grow as it did, the democratic and combative trade unions and organized workers played a prominent role. They were at the center of organizing the rally, arranging the space for people to gather, installing the stage and speakers, and leading the march. The railroad workers’ strike that was ongoing at the time converged with the candle-light protests.

Nevertheless, the unions did not win the trust and authority from the majority of the masses. That said, there was a marked difference between these mobilizations and the situation in the 2008 candlelight movement, when the unions were totally marginalized.

But neither the trade unions nor the protesters had a clear vision and plan about how far and where they were going. Organizations with revolutionary perspectives were so small that they could not influence the direction of the mass movement. As a result of the working class not being able to have independent politics, another capitalist party seized the opportunity.

At first, the South Korean Democratic Party just waited and watched. As they grew massive, the Democratic Party joined and pretended to act as the leaders. Finally, they seized power through snap elections, with the public’s primitive desire for impeachment as a motor force. This transition was made entirely within the confines of the legal political avenues available in the capitalist system.

This outcome was clearly the result of mass struggle, but with contradictory results that reflected the political weakness of organized workers and people, as well as the capitalist character of the Democratic Party.

The Promises and Illusions of Moon Jae-In

To reinforce its foundation, Moon’s new government had to consider the public’s dissatisfaction fueling the candlelight protests. Moon’s government tried to gain workers’ favor, promising the elimination of corruption and respect for workers. Right after taking power, he visited Incheon International Airport to meet irregular workers. He promised to convert all irregular jobs to regular jobs in the public sector. Some workers at that event even shed tears.

Many workers considered the Moon Jae-in government a result of their struggle and expected gains for workers. Workers with experience in struggle also gave time to this government, delaying the struggle. The idea was that we should not give back power to the far right, the former ruling party. Among progressives, there were sectors who insisted that the workers’ movement should not push the current government too far in order to prevent the government from becoming totally pro-capitalist.

Generally, illusions prevailed. The perspective that we should not trust the new government got little traction.

We called these expectations illusions. In the past, we have already experienced liberal governments that oppose working-class foundation and any revolutionary prospect for socialism, and how they express themselves as capitalist governments in the end. Regardless of what workers believed, the Moon Jae-in Administration was a government for capitalists that was only concerned with how to better manage Korean capitalism.

For example, encouraging peace between North and South Korea was an important task to provide capitalists with new markets. While workers gave the new government time, delaying their struggle, the Moon government worked to gain the trust of capitalists as reliable managers of the system.

The Trap of Subsidiary Regularization

As time went by, the contradictions of the new government appeared. The promise of converting all the irregular jobs to regular jobs in the public sector instead turned into “subsidiary employment.” This trick expanded to the private sector, where communications company SK Broadband carried out the practice of hiring irregular workers under subsidiary companies. This fake regularization resulted in a real-wage decrease and increasing employer control over workers. Thanks to this experience, some workers realized that subsidiary regular employment is just an illusion.

Last year, the workers dissatisfied with this policy started to mobilize in many companies, such as Job World in the public sector and SK Broadband in the private sector. They directly denounced Moon’s government.

This passive atmosphere not only curtailed workers’ power, but also had another important effect: the more workers remained passive, the more the government implemented pro-capitalist laws and policies, aggravating working conditions.

The Moon government is carrying out laws that are attacking the workers’ right to unite and struggle, for example by debilitating the minimum wage increase, extending working hours through flexibilization, and prohibiting strikes and demonstrations in the workplace.

In addition, the far right, which was diminished and overpowered by the candlelight protests, is recovering confidence and speaking more boldly. We understand that in order to expand workers’ rights and the fight against the far right, we must strengthen the struggle to defend the political independence of the working class and refuse to collaborate with the “lesser evil” capitalist party pretending to be progressive.

Workers’ struggles breaks through the wall of illusion

But the workers did not lose all their chances. The pressure of capitalism forcing workers into struggle was far more powerful than the pressure of bureaucrats putting brakes on their struggle. In the first half of 2019, broadscale struggle occurred in Hyundai Heavy Industries, which is one of the core industries in Korea. Capitalists tried to lay off workers to cut back the labor force. In this process, the plan to weaken the union was also carried out by dividing the corporation. To fight against this attempt, Hyundai Heavy Industry workers occupied and held a sit-in protest at the place of the general meeting of stockholders, which was meant to decide the division of the corporation. These tactics failed to halt the general meeting of stockholders, and the struggle eventually stalled, but this example shows that the Korean economy is strongly tied to the cycle of global crisis.

Since June 2019 to present, a visible struggle led by highway toll workers employed by Korean Expressway is shaking Korean society. The workers are resisting “subsidiary regularization.” While last year’s workers struggles fell short of completely exposing the problems of subsidiary employment, by contrast, the toll workers’ struggle this year raised the slogan, “Oppose subsidiaries” from the start; they are demanding the Moon government take responsibility for not keeping its promise. These workers struggle with dance, singing, and sometimes with desperation against police violence.

There are five unions involved in the toll workers’ struggle. Four are democratic unions, and one is a “yellow union” (or a company union). They have fought together, but recently, the yellow union betrayed the struggle by colluding with the government. The members of the yellow union fought in earnest, and a small number withdrew from their union and joined a democratic union, where they are still fighting.

The Supreme Court also came out with a decision that the demands of the toll workers were legally justified. Nevertheless, Korean Expressway employers responsible for hiring the toll workers directly, are consistently evading responsibility and continue to hire through subsidiary companies. The government always refers to the law and the constitution to condemn the workers’ struggle, but it displays a hypocritical attitude by ignoring the Supreme Court’s decision when it is unfavorable to the government.

The government is protecting this boss and condemning the workers. The government says that because the “smart tolling system” (automation) will be adopted, toll workers’ jobs will eventually disappear.

The government has deceived workers with subsidiary regularization, but admitting that would ruin its political legitimacy, so the government is pushing hard to isolate the struggle and exhaust the workers until they give up.

But the toll workers are not willing to step back because they have been suppressed and ignored for ten, twenty years. Moreover, other workers watching them are gaining the conviction that this struggle has tremendous potential, that it must win and can win. Of course it’s not an easy fight, and the result is not guaranteed. But this round has not ended. And no matter how it ends, these workers’ struggle has been moving and will remain in the memories of a lot of workers, and it will serve as a stepping stone for the next round.