In a speech similar to those of his campaign and addressing his electoral base, Trump slammed the political establishment and spoke about borders, employment, trade, and military alliances. 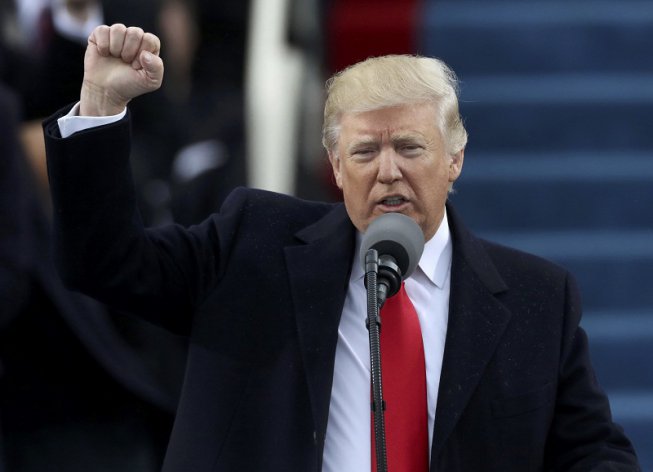 Trump chose to begin his presidency with an address made in a clearly demagogic tone, in line with his campaign speeches, without referring specifically to any of his promises or to how he plans to fulfill them.

Speaking directly to his electoral base, many of whom are the so-called “losers of globalization” who have seen a decline in their quality of life over the past few decades, Trump began by attacking the political establishment.

After greeting the former presidents in attendance and thanking Obama for the cordial transition, Trump took aim at Washington: “Today’s ceremony (…) has a very special meaning, because today (…) we are transferring power from Washington, D.C. and giving it back to you, the people.”

This was one of his slogans throughout his campaign, and he decided to make it a central part of his inaugural address. In reference to the conditions that have created mass indignation towards professional politicians, who most people see as indifferent to their needs, Trump stated: “For too long, a small group in our nation’s Capital has reaped the rewards of government while the people have borne the cost. Washington flourished — but the people did not share in its wealth. Politicians prospered — but the jobs left, and the factories closed.” Trump ended his speech by assuring his audience that “January 20th 2017 will be remembered as the day the people became the rulers of this nation again.”

Borders, Trade and Jobs
Although he did not explicitly mention China, Mexico, or NATO, Trump described the core elements of his protectionist and anti-immigrant policy in his speech.

“For many decades, we’ve enriched foreign industry at the expense of American industry; (…) we’ve defended other nations’ borders while refusing to defend our own; (…) One by one, the factories shuttered and left our shores, with not even a thought about the millions upon millions of American workers left behind.”

On the basis of these arguments, Trump put forth his isolationist policy, saying that it’s time to focus on the country and that from this moment on, it’s going to be “America First.”

His only concrete promise seems to be his vow to put in place a public works plan for the construction of roads, bridges, or airports, which will be built with “American hands.” Beyond this, he only stated that with greater protectionism, the United States would return to the path of “prosperity,” although he did not specify how he would “bring back [their] jobs, “bring back [their] borders” and “bring back [their] wealth.”

So began this new administration, led by a multimillionaire , with the support of a cabinet of millionaires and conservatives, a fact that flies in the face of his anti-establishment rhetoric. There are still more questions than answers about the possibility of actually fulfilling his campaign promises, many of which are opposed by the country’s political and economic establishment. Meanwhile, his proposed xenophobic and anti-immigrant policies are starting to meet with resistance on the streets.

While Trump gave his speech, surrounded by Obama, Hillary, and even Sanders, thousands of protesters gathered in different parts of the capital as a prelude to the massive Women’s March that has been planned for tomorrow.