The Stamford Sheraton plans to cut departments and lay off workers. But the workers are fighting back. 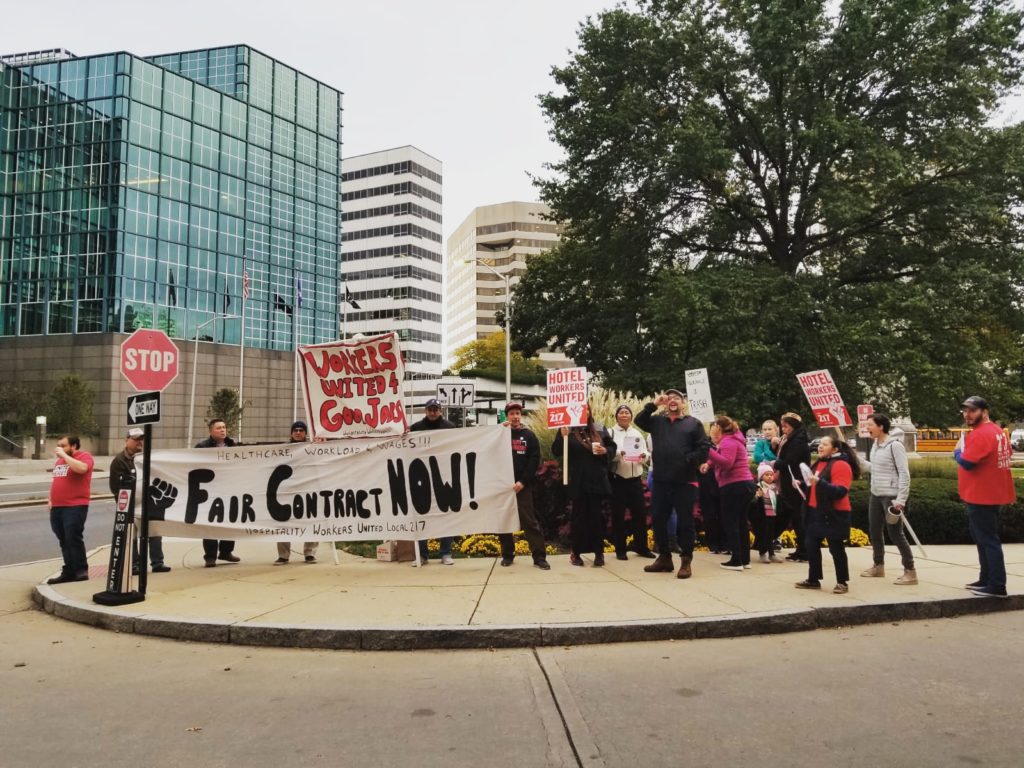 On December 13th, 2018, the workers of the Sheraton Stamford won union recognition by a margin of victory of over two-to-one. In late February, we started negotiating in good faith for our first contract and one that would raise conditions for hospitality workers throughout Stamford, just as the Hilton workers had done in their fight the previous year. But after months of steady negotiations, the hotel bosses dropped a bomb on us. On Friday, October 11, they declared their intention to cut departments and lay off workers.

The bell/shuttle department, the room service, the Club Lounge, and the lunch service at the restaurant are all on the chopping block, and by Friday, October 25, nearly a dozen workers will be laid off. Some have worked hard for decades at the hotel, and all have families to support. The attack on our coworkers is an attack on all of us and a clear maneuver to try to bust our union.

The company, however, claims that they are broke and that the hotel lost a million dollars in 2019. This is an old line. They have been using it for months to justify a wage proposal that cuts wages for incoming workers well below the starting wages of more recently hired employees. This ad hoc two-tier program was made more offensive by a mere $0.35 raise for non-tipped workers and a measly $0.17 raise for tipped workers already above the proposed minimums. In a city like Stamford, $0.35 goes exactly nowhere against soaring rents and the overall rising cost of living. Moreover, attempts to improve healthcare coverage and to lower the healthcare cost for employees hit the wall when the company responded, “we don’t have the money.”

As is invariably the case, hotels have the money to hire expensive union-busting firms but never the money for the workers. When a company pleads poverty, the correct response is always “show us the books,” and that is precisely the position of the rank-and-file negotiating committee. The company, of course, refuses that demand and only offers a small portion of financial information for this and last year. And it should be noted that the owners Rockbridge Capital and the management company Davidson both own or manage hundreds of hotels with billions in capitalization, and so to make these cuts because of one bad year at one property is even more laughable if it weren’t so infuriating. The hotel is forcing us to pay for their crisis. This isn’t a surprise because under capitalism in good times workers get nothing, and in bad times we get laid off.

Sheraton workers know that this fight to defend our coworkers will not be won at the negotiating table but will be won in the shop and on the streets. We held assemblies in the hotel to discuss our response and came up with a plan. We organized a march on the General Manager to oppose the cuts last Thursday, and we are building an afterwork rally for Wednesday, October 23 at 5pm during the busiest time for the hotel. Our coworkers are ready to fight and we’re building the labor movement as well. Already workers of the Hilton, the Hyatt, the local Stop and Shops, transit workers of the Amalgamated Transit Union, and carpenters have pledged to attend and stand with us. These networks of workers were developed through organizing the Stamford May 1st Rally and will only be further developed through more joint action of the rank and file.

The 110 – 5 vote at the Hilton and their first contract victory put UNITE HERE Local 217 on the map and inspired hotel workers in the city to rise up. Now the Sheraton struggle carries on the fight for workers’ rights in Stamford.