Should Socialists Get Behind the Scottish Independence Movement?

By far the biggest political issue in Scotland right now is the question of independence from the United Kingdom—the political entity made up of England, Scotland, Wales and Northern Ireland. 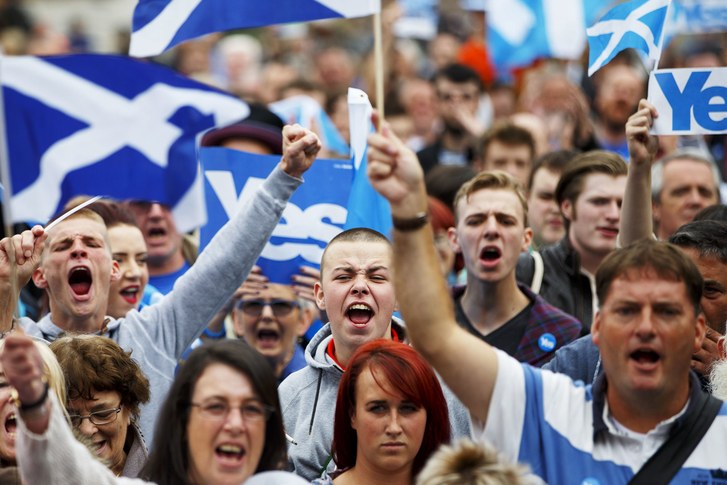 By far the biggest political issue in Scotland right now is the question of independence from the United Kingdom—the political entity made up of England, Scotland, Wales and Northern Ireland. Despite a 2014 independence referendum resulting in a 55% win for No, the pro-independence campaign hasn’t slowed down since then. Yes supporters—including the center, big-tent Scottish National Party, which is in government in Scotland and which holds several seats in Westminster—are demanding a so-called “indyref2” within the next few years. Indyref2 is in the political spotlight largely thanks to the 2016 Brexit referendum, in which all Scottish voting areas opted to remain in the EU, while most of the rest of the UK (with a few regional exceptions, such as London) voted to leave. Many Scots on both the Yes and No sides feel that their opinions on the EU are being dismissed by Westminster in favor of the views of mainly English and Welsh Leave voters.

Indy campaigners—those who think Scotland should be an independent, sovereign nation—have consistently promoted independence as the more left-wing, progressive and even socialist position than remaining in the UK. Indeed, the idea that Scottish independence is an inherently lefty idea has become all-pervasive, with No voters often branded as automatically right-wing. While there are socialists in the indy campaign, the movement as a whole is more often than not profoundly nonsocialist.

The indy campaign is a politically diverse movement that includes various small groups, ranging from center-lefties like the Common Weal and the Green Party to borderline-fascist ethnonationalists such as Siol nan Gaidheal (it’s even possible to find Yes-voting Tories if you look hard enough). The campaign isn’t so much one cohesive movement as it is several Venn diagrams, with various groups allying together and criticizing other groups. One of the more lefty organizations within the overall movement is the Radical Independence Campaign—which includes the Scottish Greens, the Scottish Socialist Party, the little-known Republican Communist Network and the Scottish Federation of Socialist Teachers. On the more progressive side, there’s Solidarity (“Scotland’s Socialist Movement”), Labour for Independence and the Campaign for Nuclear Disarmament (you might have noticed by now that the Scottish left is pretty fractured). This diversity within the indy movement makes it impossible to find many ideas that 100% of indy campaigners will agree with. What follows, then, is a description of the mainstream indy currents—generally the ones that publicly and officially participated in the Yes Scotland campaign back in 2014.

Scots Have Recognized the Symptoms, but Not the Cause

Brits have been living under austerity implemented by a right-wing Conservative government since 2010, and this has taken a heavy toll. The harsh neoliberalism imposed by the Tories—whose voter base is in England and who rarely do well in Scotland—has amplified the call for independence, since many Scots feel they’re suffering under terrible policies they didn’t vote for.

Adding fuel to the fire is the often racist and xenophobic tone of the Brexit referendum and subsequent “negotiations,” which have shown UK politics in their worst possible light. The thousands of progressive young Scots who reject far-right economics and the narrow isolationism that seems to have taken over the Brexit process have been welcomed into the indy campaign with open arms. This very legitimate hatred of the Conservative Party’s policies and the desire for a fairer society have lent much of the indy movement a progressive appearance, giving the impression that the mere concept of Scottish independence is an inherently left-wing idea, since most of its supporters oppose the Tories.

But the anger at austerity and neoliberalism has mostly been directed at Westminster, while seemingly few indy campaigners recognize that the problem is capitalism itself, not specifically the Westminster government. Instead of studying and battling the economic roots of austerity, many on the indy side opt for a simpler position, which is to blame “English rule.”

Scots aren’t suffering austerity because of “evil Westminster,” but because the nationwide bourgeoisie is taking advantage of a capitalist crisis—and there is no reason to believe that, in the long run, an independent Scottish bourgeoisie wouldn’t use exactly the same political tactics.

The mainstream indy campaign isn’t backed up by any rigorous class analysis, and it enormously prioritizes the idea of nationhood over that of economic class and material conditions.

Ultimately, there is no major difference between the interests of the Scottish proletariat and those of the English and Welsh proletariats. But the indy campaign sows seeds of division by insisting that there is some great national divide, one that separates what’s “best for Scotland” from what’s apparently best for the UK. But what’s “best for Scotland” can never be isolated as one set of policies, given that the interests of the Scottish bourgeoisie will always conflict with those of the Scottish proletariat. (Besides, if everyone in Scotland were somehow united with one political voice, all Scots would be full of love for the Scottish National Party, which claims to “stand up for Scotland” at Westminster—and that certainly isn’t the case.)

Prioritizing nation over class extends into every facet of the indy campaign, and it contributes to much of what makes the movement nonsocialist. For example, most of the campaign has fallen in line behind—or at least it has collaborated with—the Scottish National Party, a bourgeois party that has few solid political values except independence. This alliance with the SNP destroys any political independence of the Scottish working class, because, as always, the fight for independence will always trump protecting the interests of the proletariat.

Partly as a result of the alliance with bourgeois nationalism, the more left-wing strands of the indy campaign insist on “building socialism” after independence via the new Scottish parliament. But that’s just the ones that see some kind of socialism as a good thing; there are plenty that don’t. Either indy campaigners don’t understand what socialism is and mistake it for social democracy, or they don’t understand how it must necessarily come about. No matter how “progressive” or “lefty” an independent Scottish government would be, nothing would change its class character as a liberal bourgeois institution.

The concept of England and the English put forward by a chunk of the indy campaign is that of a rabidly right-wing nation of narrow-minded, Scotland-hating, Tory-voting racists. While there are certainly reactionary sections of English (and Scottish) society, this image bears no relation to the vast majority of English people, and it serves only to place an arbitrary dividing line across the island of Britain. It’s an attitude that does nothing to advance the joint and heavily intertwined interests of the Scottish and English proletariats. Those with this attitude waste time insisting that English and Scottish workers are somehow enemies—or, at the very least, insisting that they have “different values.”

The combined British proletariat has fought and won battles in decades past, and no justification can be made for splitting it across an ancient boundary line so that one part of it can try to “build socialism” via a liberal bourgeois government and the other part can…well, also try to “build socialism” via a marginally different liberal bourgeois government.

The English, Scottish and Welsh populations have been politically intertwined since the 1707 Act of Union, which merged the monarchies of England and Scotland, making the Queen of England also the Queen of Scotland (there are several within the indy camp who call for Scotland to become a commonwealth country while the queen remains in power). Generally speaking, we have fought the same battles, overcome the same challenges and faced the same enemies as a united class that speaks the same language (plus Welsh and Gaelic) and lives on the same island. Our needs are fundamentally the same, with only very limited regional differences—and these differences have more to do with “city vs. country” and “industrial vs. agricultural” rather than a clear dividing line between Scotland and England.

Our interests are the same, and our liberation will come about through collective, united action that transcends all supposed national or county boundaries. The Scottish independence campaign, at its worst, insists on cooperation with a big-tent bourgeois nationalist party, outright rejects proletarian leadership, doesn’t care a jot about class politics, and encourages a twisted and profoundly inaccurate view of “the English” that serves only to abandon and let down our class allies to the south. The indy campaign is thus merely a distraction from the real tasks at hand.

The indy campaign has energized thousands of young Scots and invigorated them with the idea that it is possible to alter our political system, that things can be better, that collective action has the power to bring about real, tangible change. How tragic that this burst of youthful political energy is being channeled not into the collaboration of the entire British proletariat to break the chains that shackle us all, but into pushing a bourgeois parliament for a referendum whose positive outcome will ultimately do nothing to end the exploitation and oppression of Scottish workers.