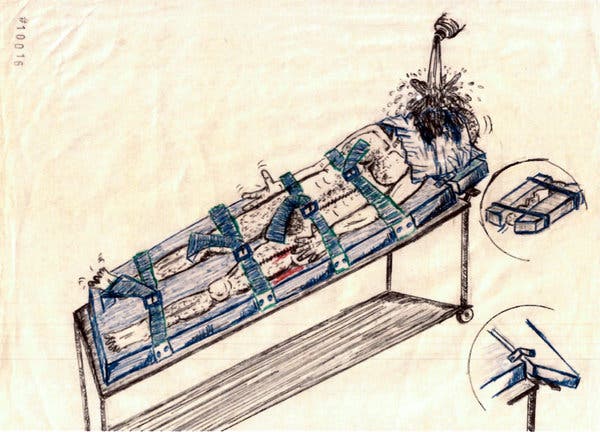 The detention camp at Guantanamo Bay is the most obvious proof that American democracy is little more than a myth. An imperialist prison in Cuban territory, which has operated for almost two decades and whose dark secrets we barely know about, reveals the true face of American imperialism.

Two days ago the New York Times published the drawings of Abu Zubaydah, one of the first prisoners at Guantanamo Bay. Zubaydah was captured in 2002 and has been held at the detention center for seventeen years. He was arrested and imprisoned for his supposed involvement in the 9/11 attacks, but it has since been proven that he had no knowledge of these events. He was also the first prisoner after the 9/11 attacks to be tortured by the C.I.A. 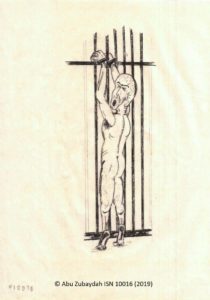 The drawings show in stark, and sometimes minute detail  the methods and tools that U.S. soldiers have used to savagely torture prisoners in order to get them to confess to conspiring against the U.S. government. They are reminiscent of the shocking photographs of the Abu Ghraib prison, released during the Bush administration, which showed American soldiers torturing and humiliating Iraqi war prisoners.

The state terror exerted against prisoners in Guantanamo has been revealed over the years through both official and unofficial reports, but Zubaydah’s drawings show that the state-sanctioned torture is far worse than has been previously disclosed. The methods of torture used against prisoners after September 11 were classified by the C.I.A. as “enhanced interrogation”—a grotesque euphemism to describe such acts of violence as waterboarding, sleep deprivation, and other bodily harm. 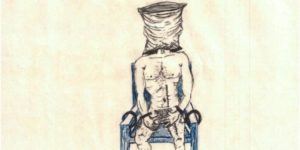 Zubaydah’s drawings are part of a larger investigation into the interrogation program implemented during the Bush era, including the practices used in Guantanamo and in C.I.A. black sites around the world. Though this report and the reports that have preceded it reveal  the terrifying situation of hundreds of detainees in Guantanamo and elsewhere, the political leaders, soldiers, and officials responsible have gone unpunished. Guantanamo Bay operates with the full support of the U.S. government. Today, the current director of the C.I.A. is Gina Haspel, who was the head of the C.I.A. torture program in those years and acted under the direct orders of President George W. Bush. 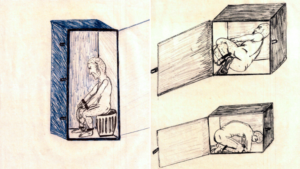 While the C.I.A.’s torture program may have been suspended (this does not mean that prisoners in U.S. military detention centers around the world are not still being tortured), the current president is a big fan of torture. One of Trump’s first directives upon assuming the presidency was that Guantanamo remain open. He has repeatedly insisted that “torture works” when it comes to imposing the will of the U.S. onto the rest of the world. Trump has also sanctioned the continued mistreatment of immigrants detained in concentration camps around the country, justifying it by calling these individuals “criminals.”

But Trump is not the only one to authorize the use of torture on individuals the U.S. considers its enemies. What the New York Times and the liberal press do not say is that former Democratic President Barack Obama promised to close Guantanamo and did not do it. Both Democrats and Republicans have kept open a concentration camp that operates illegally on an island besieged and blocked by the U.S. government and its allies. There is nothing more hypocritical than the rhetoric of “American democracy” that condemns “authoritarianism” around the world while invading countries, encouraging and promoting coups, and using torture all over the world. Guantanamo must close immediately. Only a powerful movement in the United States, independent of the Democratic Party, has the ability to shut down this tool of imperialist domination and its torture programs for good.