Sick and Tired of School Conditions, Teachers Call Out Sick

For several days last week, many of Detroit’s public schools were closed because teachers organized a “sickout” to protest unsafe working and learning conditions in school buildings. 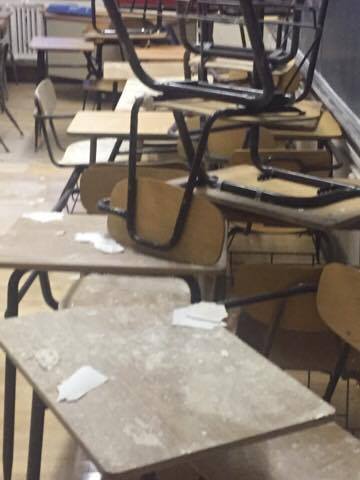 A total of 64 out of Detroit’s 100 public schools did not open on Monday, January 11 because so many teachers called in sick that it was impossible to hold classes. Two dozen schools stayed closed on Tuesday and as late as Thursday, a handful remained closed.

The sickout has brought media attention to the deplorable conditions of Detroit schools. Ivy Bailey , interim President of the Detroit Federation of Teachers, said, “There are rats, there are rodents, there is dripping water and there are holes. This is unacceptable. There is black mold. Our children are in that building breathing day in and day out. This is third world.”

Under the hashtag #supportDPSteachers, Twitter was flooded for days with images of the dilapidated schools, with mushrooms and bullet holes creeping along classroom walls, crumbling ceilings, windows that are stuck open through the dead cold of winter, and crowded classes of forty students or more.

The conditions are dangerous for children and, some believe, have serious deleterious effects on children’s health. At one school, the excessively dry air in the building caused students to experience nosebleeds and even vomiting. School nurse India Brimberry said, “Their health is definitely at risk. It doesn’t take a rocket scientist to see…You can see what’s in the building. This is a hazard.”

Teachers organized the sickout not only to protest the conditions of the neglected facilities, but also to point out the deplorable working conditions. Many teachers have forty to fifty students in a classroom, a class size that makes it impossible to teach well. Due to the teacher shortage at one elementary school , 8th graders are “housed in the gym and pulled out for instruction in core subjects for only an hour or so each day.”

Race, racism and class have everything to do with the state of Detroit’s public schools. Over 80% of the residents of Detroit are Black, numbers reflected in the number of Black students in public schools. Three fourths of the students in Detroit qualify for free or reduced lunch, demonstrating the extent of poverty in the city. The conditions of public schools are acceptable to the state’s governing elite because they are experienced by poor Black kids—institutional racism at it’s finest.

Teachers’ organizing is “harmful to students”

As is often the case when teachers organize, the government claimed that teachers’ actions were harmful to students. Michigan Governor Rick Snyder said, “It’s really unfortunate because it’s coming at the expense of the kids. There are other venues and ways—if people have issues or things that they’d like to present—to do that.”

The government also argued that they were responding to the issues that teachers presented, and claimed that many of the cases addressed in the sickout had not been brought to the attention of authorities. “To the extent that areas of concern are called to our attention, we remediate the issue based on the resources available. In every case where an issue has been brought to our attention, we have responded in as timely a manner as possible,” Detroit Public Schools Emergency Manager Darnell Earley said. . However, he went on to say that the district simply does not have the money to fix the larger problems- such as replacing a roof.

While the government promises that it will address teachers’ concerns in a timely manner, teachers have had enough with empty promises. Lakia Wilson , who has been a teacher in Detroit public schools for 19 years says, “We have no hope because we don’t trust our employer, because we’ve been lied to, the broken promises, we just have no hope.”

It is curious how authorities bemoan the loss of learning when teachers organize a sickout, but have no problem placing 40 students in a classroom—conditions that make it impossible for most students to learn well. Why does the government suddenly care so much about student learning when every other day of the month students are not learning due to unsanitary conditions, over-crowded classrooms and a lack of supplies? Clearly, what the district and the government cares about is not quality learning for Detroit’s public school children, but rather, calling attention away from the deplorable conditions in the schools and impeding teachers from organizing for their rights and the rights of their students.

One of the most extraordinary aspects of this story is that the sickout was organized without union support. The union argued that they were against the sickout tactic but agreed that something had to be done about the conditions of Detroit public schools .

In the state of Michigan, strikes by government employees are illegal , leaving open the possibility for the state classifying the sickout as a strike and suing the union. However, because the union did not organize the sickout, the sickout may not result in a fine for the union.

The Detroit public school district is 1.7 billion dollars in debt. Anywhere from one-third to 40 percent of the education budget goes towards paying off the debt , most of which is owed to the state of Michigan because banks will not lend to an entity that is so deeply strapped with debt .

Since 2009, the public school district has been under the control of emergency managers who are not democratically elected, but rather hand-picked by the governor. Since then, Detroit public schools have only plunged deeper into debt , demonstrating that the emergency measure was not at all effective.

Matt Fabian, managing director of Municipal Market Advisors in Concord, Massachusetts, says, the Detroit public school district is “no longer, really, a normal school district. The school district has turned into a debt-servicing entity. It’s making its own mission impossible.”

The struggles of Detroit’s economy have been well documented, as outsourcing and financial problems have torn the city apart. During the recession, Detroit’s unemployment rate was as high as 29 percent . In 2013, Detroit filed for bankruptcy, but has since then begun a slow economic ascent via a gentrified downtown neighborhood that is renovated and [has new businesses ->
http://www.theguardian.com/us-news/2016/jan/12/detroit-teacher-sickout-shut-down-public-schools]. Yet that has not meant an improvement for the public school district, which has seen jobs and programs cut, while their buildings fall apart.

Without state intervention in the Detroit public school system, the district will go broke within the school year. Governor Snyder proposed a $715 million budget for Detroit schools. Of this, $515 million would go toward paying off the school district’s debt and another $200 million would create a new kind of “school board” to run the district, which would once again be hand-selected by the governor himself. In other words, this budget would not go towards fixing school buildings, hiring more teachers or bringing back the arts, or any of issues that teachers are fighting for.

An education budget that is aimed primarily at eliminating debt will not produce the results that teachers and students need. Rather, it is the responsibility of the state of Michigan to forgive the Detroit public school system’s debt so that the school can get back to the business it was meant to do: educating kids. 100% of the education budget should go towards kids’ education and fair salaries for teachers, not towards paying an overblown debt.

What’s next for Detroit’s schools and teachers?

The sickouts have already begun to have the desired effect. Some of the most basic and most dangerous aspects of the school buildings have been addressed in many schools as a result of the media attention produced by the sickout. The quick response shows that the district did have the money to fix the problems — even as teachers who had been complaining about the conditions for years were told the money wasn’t there.

For example, David Kade, a 4th grade teacher says that there for years there was a hole where mice would crawl out of. Four years ago, the hole was covered with a board. After the sickout, a new water fountain was installed. Kade says, “It is a slap in the face because it’s things we’ve been saying all along that needed to be fixed,” Kade says. “They want to beat us down because we interrupted education to protest … but our protests got [inspectors and officials] here to fix these things because we put [them] on the spot.”

While there are urgent health concerns that must be dealt with immediately, teachers cannot be satisfied to teach in overcrowded schools that simply fulfill the most basic health requirements.

The current situation in Detroit demonstrates the need for a massive labor movement to overturn the neoliberal laws and cutbacks of the last few decades. Detroit teachers should be able to go on strike to protest working conditions. The strike is a central tactic for workers to fight for their rights as well as the rights of their students. Without this right, the government holds all the power in the labor relationship and teachers are left to organize sickouts and other limited and isolated actions. The right to strike is a basic labor right—one that was fought for and won by workers, but has been taken away from many teachers across the country. It is time for teachers and public employees to take back this right. The conditions of schools in Detroit demonstrate the necessity for teachers to be able to hold widespread, coordinated strikes.

Additionally, teachers must unite to fight for the immediate pardon of Detroit’s debt. Instead, funding should be directed solely towards hiring more teachers and raising salaries, reducing class sizes, renovating buildings, and creating quality public education for all of the city’s students.

Lastly, I would be amiss not to mention the crisis going on a little over 60 miles from Detroit- the Flint water crisis. In Flint, the water was contaminated with lead for almost a year before the government took any action. The teachers in Detroit must unite with the residents of nearby Flint to denounce the conditions that the working class and poor are forced to live in—conditions that lead to sickness and even death. People are dying, children and getting sick and schools are falling apart- and that is the government’s fault.