We interviewed the members of Bosnian music band Dubioza Kolektiv, who describe in their words Bosnian society and the post-socialist Balkans after the dissolution of Yugoslavia – a reality of corruption, unemployment, criminal privatization and mass emigration. 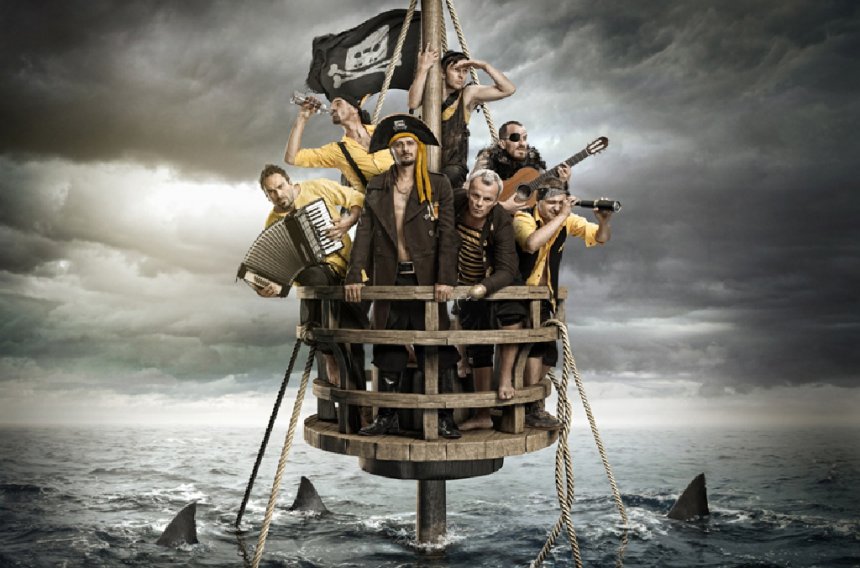 We interviewed the members of Bosnian music band Dubioza Kolektiv, who describe in their words Bosnian society and the post-socialist Balkans after the dissolution of Yugoslavia – a reality of corruption, unemployment, criminal privatization and mass emigration. The band paints this picture with uncontained energy that has led to their widespread popularity especially among young people in all former Yugoslav republics.

How would you define Dubioza Kolektiv, your musical style, musical inspiration?

The only constant (element) in our music is that we try to keep an authentic Balkan sound to it, so that you know straight away where we’re from when you hear it. That’s why our music sounds so eclectic in the end and it is quite hard to accurately describe with words.

When we see your videos, we see you playing in big concert halls full of people, but also playing in the street with just a few people around you, singing with you, like “unknown” street artists. How important is it for you to keep this kind of simplicity?

Playing on the street is the biggest challenge for us. At festivals or club shows, people are coming with some foreknowledge of and with some expectations about the band, but on the street, you are totally anonymous. You have to try hard to get the attention of passersby and you have very short time to do this. This is the way to step out of your “comfort zone” and put your music to the ultimate test and we are trying to do it wherever we can.

It is sad to see that more and more cities are prohibiting playing on the streets. They ask for special permissions and threaten with fines and penalties. There should be more appreciation for people who are trying to spread good energy on the streets.

In your lyrics you talk many times about politics and social problems like corruption or unemployment. Why do you think it’s important to speak about these subjects in your music?

We are singing about our society – problems and stories that we find important. Our goal is to put different light on some of those stories and start a dialogue with people about those issues.

We don’t have illusions that music can change the world per se and that one band can start a revolution and solve all problems in the world with a few songs. But we believe that music can inspire people and make them think about issues that would otherwise be ignored. We think that the role of artists is to try to influence society to embrace positive values.

In Bosnia two years ago, there were mass mobilizations and an uprising against the political class, privatization, unemployment, the closure of factories, etc. Do you think that something changed? I mean politically, but also in the conscience of Bosnian people.

What happened two years ago is just a part of a process that is happening in our country for the last 20 years. We are a transitiona society and all sides in this social struggle are testing boundaries of this new reality.

Politicians and oligarchs are testing how far will citizens tolerate corruption and criminal privatization of state-owned companies. On the other side, citizens and civil society are practicing various ways of responding to these processes.

Twenty years is a relatively short time to change the entire picture into a functioning democracy with responsible politicians and a strong civil society. What happened was just one episode in this struggle.

The struggle of workers from Dita factory in Tuzla became a symbol of workers’ resistance in Bosnia. They were at the core of the social explosion in February 2014. Some months ago, they started to produce again and you made a video to support them. Can you explain why it’s important for you to support workers’ struggles?

This was very good example of how things can change in a different and more positive direction. Dita, once a big and important state-owned company, was destroyed in a criminal privatization process and went into bankruptcy. Workers didn’t accept this and for years they demanded a solution to this situation, but they were ignored by politicians who did their best to put Dita in that situation in the first place.

And then workers decide to take matters in their own hands and restart production in factory on their own. A lot of artists and public figures supported Dita and helped promote this story to the people, who recognized this and decided to start buying Dita’s products. As a result, the company is on the rise and quite far from the desperate situation they were in a short time ago.

This success story is the brightest example of worker’s self-management and is a good example of how things can change for the better.

You were very young when the “transition” and the war in Bosnia started. Did this have an influence on your music?

Recent history had a big influence on the way we function as a band. It taught us not to wait for a miracle, but to rely on your own strengths, work and knowledge.

This is why we do everything by ourselves and completely D.I.Y. – we produce and record our music in our own home studio, design materials for band, manage web and social network presence… We think that this is the best way to do that.

Are you preparing a new album, international tours, etc.?

Our new album, “Happy Machine,” was released in February of this year and it features guest appearances by Manu Chao, Benji Webbe (Skindred), La Pegatina, and Cambo Agushev with songs in English, Spanish, Italian and Punjabi. The album is available as a free download on our website . We will also have an album release in France in April and will hold several promotional concerts there.

Next week, we will begin our first tour in the US and Canada andwill continue our concerts and festival shows until the end of this year. You can find all information about our concerts at  www.dubioza.org