Last December, New York State Police murdered an 11-year-old girl. An officer rammed the SUV that a Black family was driving, causing it to crash. The murderer remains on duty. 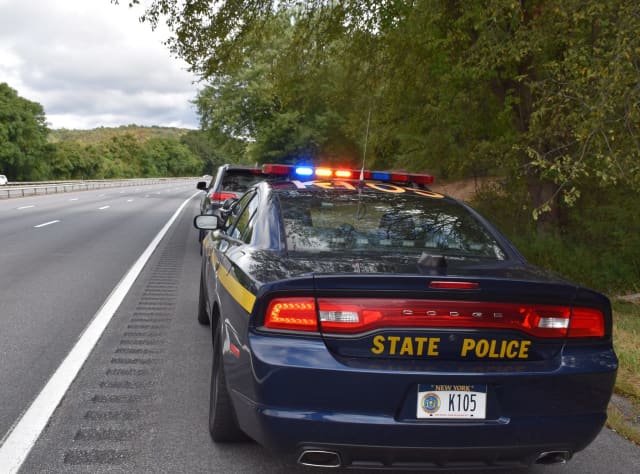 Just before Christmas, Tristin Goods was driving on I-87 between New York City and Albany with his wife and his daughters, Monica (11) and Tristina (12). Around midnight, state trooper Christopher Baldner pulled them over, allegedly for speeding. Goods recounted what happened in an interview with the New York Daily News. Police reports corroborate his accusations.

According to Goods, the officer was belligerent, shouting at him and then cursing at his wife. Goods says that he kept his hands on his steering wheel and requested to speak to Baldner’s supervisor. Baldner then questioned him if he had “guns or drugs” in his car, with no reason for suspicion whatsoever.

The cop saw Goods’s two young daughters in the car. Goods alleges that after a verbal argument, Baldner pepper sprayed the interior of the SUV, affecting all four occupants. Goods drove away out of fear after the unprovoked attack on his family.

The state trooper chased the family down the highway and rammed their SUV from behind with his squad car, twice. His second impact, striking the right rear corner of the SUV, caused them to careen across the highway, flip, and roll over a guardrail. Monica Goods was thrown out of the vehicle and died.

The trooper prevented Tristin Goods from running to help his dying child. Goods testifies that Baldner aimed his gun at him after the crash and repeated the accusation that he might be carrying “guns or drugs,” then arrested him.

New York State Police Troop Commander Jennifer Gottstine issued a nine-sentence statement that explained the 11-year-old girl’s death only by saying that “a collision between [her family’s SUV] and the State Police car occurred” and that their vehicle “lost control and overturned.” The statement did not mention intentional ramming by a cop or a second impact. It also withheld Baldner’s name.

The NYSP’s own reports show that Tristin Goods’s account of being attacked and rammed is true. The Daily News obtained the police collision reports, which state that Baldner’s police car struck the Goods family’s SUV twice from behind while pursuing them. The two impacts occurred 1,600 feet apart. They cannot possibly have been accidental, and the cop chose after hitting the family once to do so again.

The police took 12-year-old Tristina Goods to their station immediately after she witnessed her sister’s death and questioned her for four hours without a parent present.

The NYSP’s written policy on car pursuits says that cops should “minimize” high speed chases, not use “reckless or hazardous measures,” and end a pursuit if “a clear and unreasonable danger to the public” outweighs the importance of capturing someone. Clearly, this policy is worthless. The Daily News had to make a Freedom of Information Act filing to see the policy, and the NYSP redacted part of its text.

Shortly after Monica Goods’s death, Democratic New York Attorney General Letitia James declared she was beginning an investigation. The NYSP also says that it is “investigating” the actions of its own cop. Yet six months after murdering Monica Goods, Christopher Baldner is still an NYSP officer, merely assigned to desk duty. The state government has taken no action to charge him with a crime. No state officials have publicly discussed the facts of his actions. No dash camera or body camera video of the event has been revealed.

What does it mean that Trooper Christopher Baldwin remains today both a free man and a cop? The New York state government has so far refused to prosecute him, and state authorities have not brought the facts of what he did to public attention. Governor Andrew Cuomo and State Attorney General Letitia James bear responsibility for this murder together with state officials at all levels.

The Democratic Party says it agrees with calls to dismantle systemic racism. Yet Democratic officials run the police and prison systems in states such as New York and Minnesota. Despite the words of sympathy and concern they offer in speeches, Democratic authorities are still sanctioning the murder of Black and Brown people by denying or silencing the facts of clear police crimes.

Monica Goods’s life was stolen from her, and we cannot be silent. A capitalist party will not combat the police who work for them. Thousands and then millions of workers of all races need to build our own political agency in order to tell the truth about what the police are continuing to do, and to fight back against it.