Six Things We Can Learn from the Socialist Left in Argentina

The Workers Left Front–Unity, a Trotskyist electoral coalition, got 700,000 votes on Sunday’s primary elections. Can this be a model for the left in other countries? 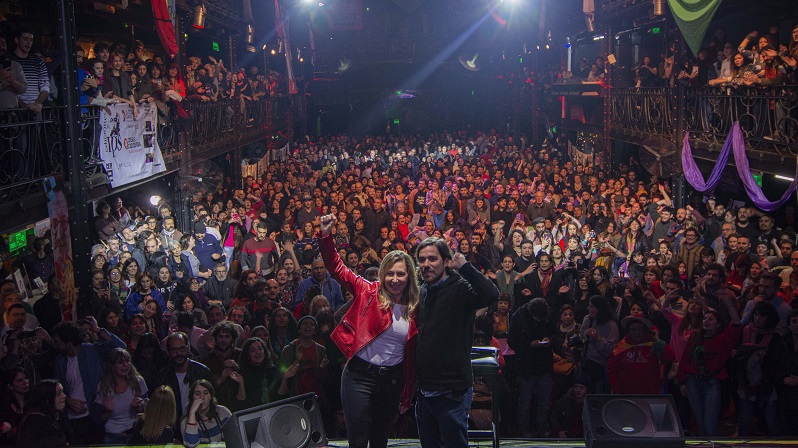 On Sunday, revolutionary socialists in Argentina got 700,000 votes in the primary elections. The Workers Left Front—Unity (Frente de Izquierda y de los Trabajadores–Unidad) is the most successful electoral project of the revolutionary socialist left anywhere in the world, and it has been for some time. Is it a model that can be emulated?

In the United States, we often hear that socialist candidates have no chance. The election laws favor the two parties of capital. Therefore, our only chance is to support the progressive wing of the Democratic Party.

But Argentina shows that socialist candidates can reach a mass audience. Is that example relevant to us? Is Argentina just too different to draw any lessons for the United States? Of course, Argentina has its particularities. Argentine society was shaped by the mass struggles that toppled the dictatorship in 1983, and also by the “revolutionary days” of 2001, when four presidents were overthrown within a month.

The FIT’s success, however, is not primarily an “objective” phenomenon. It is the result of many years of preparatory work, on the basis of a specific strategy launched by Argentine Trotskyists.

1. Revolutionary Ideas Can Reach the Masses

In the midst of a rightward shift around the world, can we talk about socialist revolution? Won’t that make us look like aliens in the eyes of working people? Many socialists today say that we should not “scare off” workers with ideas that sound too radical. Instead, we are supposed to win sympathy with demands for modest reforms and to wait for a future radicalization before presenting a revolutionary program.

The FIT, however, ran on an election platform that includes radical measures to solve the most urgent problems of workers, women, youth, LGBTQ+ people and immigrants such as. To implement this program, the FIT calls for the formation of a workers’ government that destroys the capitalists’ state and bases itself on workers’ organs of self-organization.

When you talk about “the left” in Argentina, you are referring to the revolutionary socialist left (i.e., the Trotskyists). There is currently no reformist or social democratic left to speak of. Instead, there is the center-left bourgeois opposition, known as “Kirchnerism,” since it is led by former President Cristina Fernández Kirchner. Their discourse includes talk about human rights and feminism—but Kirchner and her late husband shared the presidency for 12 years and never tried to legalize abortion. While in power, the Kirchners were responsible for state repression and the imperialist plunder of the country.

In recent decades, a number of “new left” or “broad left” projects have arisen in Argentina, seeking a middle course between reformist and revolutionary politics. But these projects have mostly been absorbed into Kirchnerism. At a local level, they are integrated into the regime and are no less corrupt than more mainstream parties. Groups that claimed to be revolutionary and sought to reach the masses through such reformist projects largely collapsed with them.

Now we have an interesting situation: Groups that once accused the parties of the FIT of “sectarianism” because of its principled fight for class independence now exist as small sects with negligible support in elections. The “sectarian” FIT, in contrast, can speak to millions of people. Some leftists demand that the revolutionary socialist left should merge into Kirchnerism. But that ignores the basis of the FIT’s success—independence from all bourgeois and reformist forces.

3. Workers in the Front Line

The candidates of the FIT do not belong to the caste of politicians who take exorbitant salaries and bribes. Socialist candidates are workers, like the sanitation worker Alejandro Vilca who once won 18.3% of the vote in the northern province of Jujuy. The teacher Nathalia González Seligra held a seat in parliament for a year, then returned to the school where she worked. The subway driver Claudio Dellacarbonara from Buenos Aires or the factory worker Raúl Godoy from the occupied ceramics factory Zanon are also on the ballots.

The FIT demands that “all members of parliament and all state functionaries earn no more than a teacher.” They donate the rest of their salaries (up to 90%) to workers’ strike funds.

Revolutionaries fight against exploitation, but also against every form of oppression. These struggles belong together. The working class can liberate itself only if it fights every kind of discrimination—including within its own ranks. That is why feminism is a primary question for the FIT.

Prominent feminists like Myriam Bregman represent the FIT in parliament. As a human rights lawyer, she helped prosecute the generals who committed mass murder under the military dictatorship—she even questioned the current pope, Argentine Cardinal Jorge Bergolio, about his connections to the dictatorship. In Argentina, like in many countries around the world, the women’s movement has mobilized millions of people. Capitalist politicians like to give lip service to the rights of women, but as Bregman argued in her campaign launch, socialist feminism means fighting alongside the most oppressed and exploited sectors of women. The FIT is running women who are just 18 for office.

The FIT demands free abortion on demand and comprehensive sex education. Together with independent activists, the Party of Socialist Workers (PTS), which is part of the FIT, has built up the socialist women’s organization Pan y Rosas (Bread and Roses). It fights for the independent self-organization of working women, for example with women’s committees in factories. The strike at the PepsiCo factory was an example of this kind of socialist feminism rooted in the working class.

The FIT participates in elections—but it is not an electoral project. The organizations that make up the FIT have fractions in factories, workplaces, schools, universities and neighborhoods. Especially the PTS has a strong presence in the rank-and-file of the working class. This became visible when 20,000 socialists filled a soccer stadium at a FIT rally.

The FIT’s representatives in parliament reject any cooperation with the representatives of the exploiters (i.e., politicians of the bourgeois parties). Instead, they stand on the front lines when workers fight for their rights and face repression. Nicolás del Caño of the PTS, for example, was not sitting in congress during the PepsiCo strike. He was hit by rubber bullets along with the workers. The works council was led by PTS comrades who have built up a revolutionary fraction in this factory over the last 20 years.

A few years ago, the reformist party SYRIZA was the hope of many leftists around the world. But after just a few months in office, it broke its promise to end austerity. Instead, it spent four years implementing brutal austerity policies combined with racist attacks on immigrants. It left behind despair and confusion, preparing the way for the return of the right.

So what could a new left look like? Reformists have transferred their hopes in “left populists” like Jean-Luc Melanchon of France of the neoreformists of Podemos in the Spanish State. In the best of cases, they will repeat SYRIZA’s betrayal.

The FIT represents a totally different model. Instead of a “new left” that tries to combine reformist and revolutionary ideas—or even worse, supports social democratic politicians in the imperialist Democratic Party—we need an independent revolutionary left. This can be successful, especially if revolutionary socialists collaborate on the basis of class independence, without hiding differences among themselves.