Sixty-Five People at the RIO Summer Camp in Germany: Revolutionary Regroupment, Not Participation with the Government

Trotskyists in Germany held a summer camp in late August, where discussions focused on revolutionary regroupment as part of an international perspective of reconstructing the Fourth International. 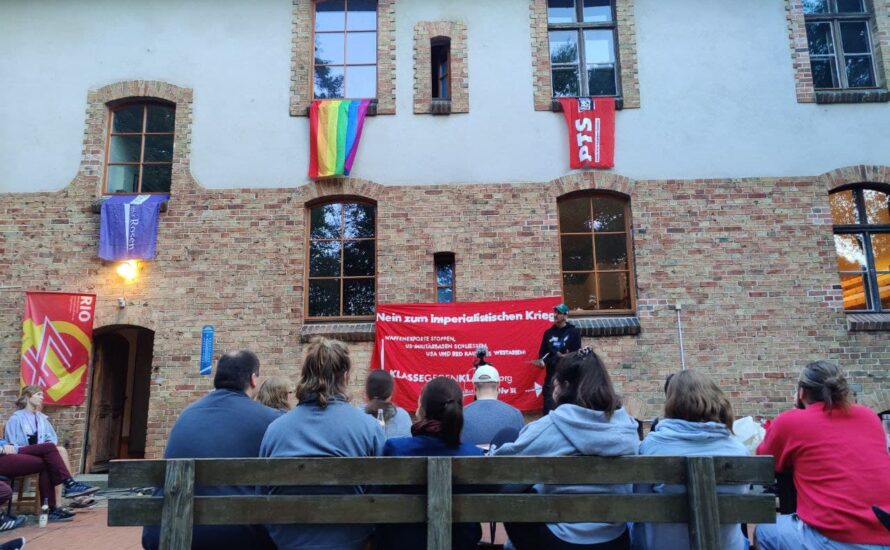 From August 24 to 27, the summer camp of the Revolutionary Internationalist Organization, publisher of Klasse Gegen Klasse, took place in Brandenburg. This year’s camp was shaped, first, by the imperialist barbarism of the Afghanistan war, which resulted in the humanitarian catastrophe of the past few days and weeks. Second, it was shaped by the effects of the pandemic, which had determined the participants’ daily lives for a year and a half. The camp took place under corona-compliant conditions; participants were vaccinated, and there were daily tests. Third, the camp was politically framed by massive strikes: the nationwide strike of the GDL (a trade union of engine drivers), which paralyzed Germany for days, and the strike of the Berlin hospital workers, who successfully defended themselves against a judicial ban of their strike, after they had already fought on the front lines in the last year against the effects of the capitalist handling of the pandemic.

We were particularly proud that, among the 65 young people and workers who attended the camp, there were workers from the delivery service Gorillas and from the Berlin hospital movement, who traveled directly from the strike to our summer camp. In addition, we welcomed international comrades from Chile, France, and Italy as guests, who reported on the class struggles there.

In three intense days we discussed an anti-capitalist, internationalist, anti-imperialist, and socialist perspective on the capitalist crisis, the climate catastrophe, and the imperialist barbarism that the bourgeoisies of Germany, the U.S., and other imperialist countries are imposing on us. The camp took place just shortly before Germany’s federal elections, which mark the end of the Merkel era and raise the question of what perspective the workers, women, migrants, and youth will need in the coming period.

In 12 workshops, the participants discussed topics such as “Care Revolution,” a socialist solution to the climate catastrophe, the popular uprising in Chile in 2019, the class struggle in France, state racism, the Palestinian liberation struggle, queer liberation, and the question of self-organization and revolutionary strategy. The question of building a party that can assert our interests played a central role. Twenty years ago, the “Red-Green” government of the Social Democratic Party (SPD) and Alliance ‘’90/The Greens launched Germany’s participation in the Afghanistan war. Today, DIE LINKE (the Left Party) is supporting that government in the upcoming coalition negotiations by jettisoning what remains of its anti-militarist principles and voting for the Afghanistan mission.

We cannot rely on this party to protect our interests, which it will betray at the first opportunity for government positions. We must build a revolutionary party of youth and workers ourselves. That is why at the summer camp we discussed the need for a revolutionary regroupment instead of hoping for a green-red-red federal government. We don’t want to develop this party only from within; we want to win to this perspective the workers, the youth, and the oppressed, who are striking today at, for example, Gorillas and the hospitals. So after the news reached us that the Berlin hospital workers had defeated the strike ban, we sent a solidarity delegation from the camp to the strike. Throughout the camp, international solidarity was also palpable, expressed in mutual greetings from struggling hospital workers from Germany and Chile.

That this perspective of revolutionary regroupment in the heart of imperialism — as part of an international perspective of reconstructing the Fourth International — must have clearly anti-imperialist content, as Charlotte Ruga, a midwife at a Munich hospital, among others, made clear at the closing event. She emphasized above all the role of socialist feminism against bourgeois-liberal feminism, which legitimizes imperialist interventions under humanitarian pretexts:

For us, the struggle against imperialism is always also a struggle against bourgeois feminism, which also tries to justify the military Western invasions with women’s liberation. And this shows us once again that we need to build a socialist and anti-racist feminism worldwide with bread and roses, that does not accept imperialism for the alleged salvation of women’s rights.

Yunus Özgür, editor of Klasse Gegen Klasse, also denounced the role of the DIE LINKE party in this, which for the first time in parts approved the imperialist Afghanistan intervention in a scandalous parliament vote:

While this imperialist war continues, we see a declaration of bankruptcy of the German Left. The Left Party, which hides behind an alleged pacifist humanitarianism in parliament, while actually taking a step towards the imperialist camp. It abstained [and even partly agreed] in the majority of the votes instead of taking a stand against it and making an unequivocal rejection of this imperialist war.

Our perspective of revolutionary regroupment is radically opposed to this. As a tool for spreading our ideas and organizing, we want to put our website Klasse Gegen Klasse at the service of this struggle. In conclusion, Yunus therefore also invited all those present and all those who sympathize with our ideas to cooperate:

It is our task now to enter the election campaign with our newspaper in hand, to expose all the lackeys of the German bourgeoisie and to plead for a way out of this crisis. And that’s why we invite all of you — including all the comrades who have had so many discussions with us for the first time today — to join RIO and Klasse Gegen Klasse to build a revolutionary organization with us.

First published on August 30 in German in Klasse Gegen Klasse.