Over the July 4 weekend, more than 1,700 people met up in Chicago for the Socialism Conference. The International Socialist Organization (ISO) had dissolved a few months previously. Many participants were pushing for reformist politics within the Democratic Party—but others want to resist the shift to the right. 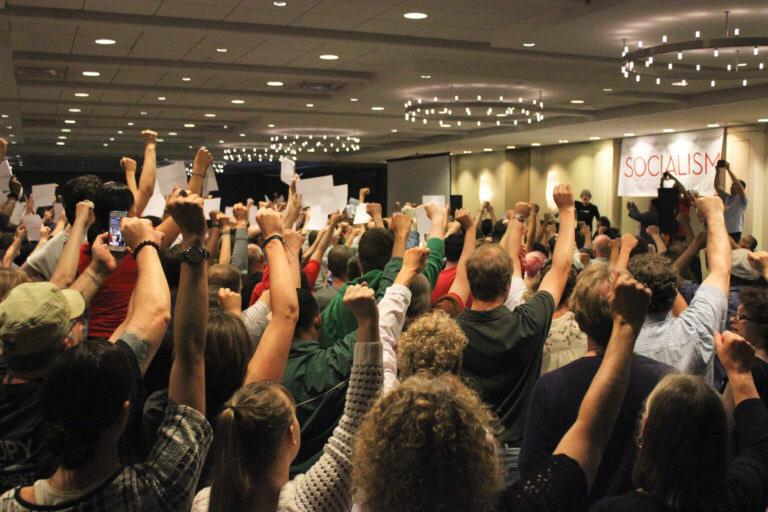 The Socialism Conference has taken place for more than 30 years. What started as a summer school of the International Socialist Organization (ISO) slowly grew into the biggest meeting of the revolutionary left in the United States. The ISO dissolved just a few months ago—weakened by new reformist pressures, struggling with how to address questions of oppression within the organization and shaken by the revelation that the old leadership had covered up a case of sexual abuse.

Until a few weeks ago, everyone was wondering: Would an ISO conference survive without the ISO? Some people expected just 400 or 500 demoralized people. But Haymarket Books, the ISO’s publishing house, is still going strong, and Jacobin and the DSA came on as additional sponsors. In the end, more than 1,700 people registered, including some first-time attendees who found the conference by googling “Socialism.”

Socialism 2019 showed all the contradictions and possibilities for the socialist left in the United States.

Contradictory Trends in the United States

The U.S. political system has been disrupted by the Bernie Sanders phenomenon, which has been embraced by broad sectors of the masses. The growth of Sanders’ popularity did not fall from the sky. The Vermont senator is capitalizing on strong feelings against the status quo that have been brewing in the United States since the 2008 crisis. This has an undeniably progressive character.

Of special note is the election of six socialists as aldermen in Chicago—five of them ran as Democrats, but one, Rossana Rodriguez, won as an independent socialist. These Chicago socialists are clearly to the left of Sanders and  Alexandria Ocasio-Cortez, having a strong discourse against imperialism, against the police and against racism. Their election shows that there is mass appeal for socialist ideas and that there is a growing enthusiasm to vote for people of color as popular representatives among the working classes in cities like Chicago. Rodriguez’s candidacy, in particular, is an example of the socialist left participating in elections independently of the Democratic Party and winning.

Three of these alderpeople—Rodriguez, Carlos Rosa and Jeanette Taylor—gave fiery and inspiring speeches at the biggest session at the Socialism conference, “Welcome to Red Chicago.” Their speeches centered on denouncing the capitalist system, imperialism, racism and police brutality.

But this session also expressed the other “soul” of socialism’s resurgence in the United States: the pressure on the Democratic Party to take on elements of the progressive agenda. Demands raised by Sanders only four years ago, such as Medicare for All, are now at least rhetorically embraced by almost all candidates in the primaries. In this way, the Democratic Party is rejuvenating itself in the eyes of workers and youth who were sick of this party of Wall Street and imperialism. Sanders, “The Squad,” and the Chicago aldermen are generating illusions that the Democrats can make a genuine shift to the left as a result of pressure from “democratic socialists” inside the party.

This is leading some longtime socialists to shift to the right. A number former ISO leaders, such as Todd Chretien and Keeanga-Yamahtta Taylor, have thrown their support behind Sanders and other Democrats, effectively renouncing the principle of working-class political independence. Such support is incompatible with the project of constructing an organization rooted in the working class (and not just in the bureaucracies).

Unfortunately, since the Socialism Conference put an emphasis on getting socialists elected as Democrats, there were no central calls to organize campaigns against imperialism, to storm the concentration camps or to expand reproductive rights with a militant movement in the workplaces. The implication was that we can build socialism only through the Democratic Party.

Many went to the conference expecting to see the former ISO membership moving to the right, streaming into the DSA and embracing Sanders’ “New Deal liberalism.” There were no formal discussions about the lessons to be drawn from the ISO’s collapse in the official program—but countless discussions going on in hotel rooms and on lawns.

The reformist wing of the socialist movement, which wants workers to join an imperialist party, is clearly on the advance. But in today’s framework of a general reformist mood, there is plenty of space for a revolutionary left to emerge and grow. This is not the time for demoralization. The far left must set itself the concrete task of helping to further radicalize the movement.

This means intervening in the growing political and ideological debates with a revolutionary perspective. This means being on the forefront of social mobilizations. This means working to build up revolutionary tendencies in the working class. Revolutionaries need to be bold—without that, the new left-wing mood can be capitalized on entirely by social democracy. It will not be long before the young people who are interested in socialism will gain experience with the “democratic socialist” leaders in Congress. The contradictions of “socialists” in an imperialist party will reveal themselves quickly. The far left needs to build a viable alternative for everyone who wants to fight capitalism and imperialism.

Organization Instead of Politics?

The Marxist Center, a diverse coalition of local socialist groups, made somewhat of a splash at the Socialism Conference. Their workshop on the theory of “base-building” was packed. They are to the left of the DSA because they do not support the Democratic Party and Sanders’ candidacy. They presented a perspective that is opposed to working with the union bureaucracies, as well as with the bureaucracies of social movements (NGOs). This idea of class independence is to be welcomed.

Yet some critical but fraternal comments are necessary. The Marxist Center calls on individuals and groups to affiliate, but it fails to precisely analyze the current political reality: their presentation was quite abstract and did not articulate a clear vision of the immediate political tasks for the left today. In other words, it is difficult to know where the Marxist Center stands politically in the context of the global rise of the right, the imperialist offensive in Latin America and the Middle East, attacks on reproductive rights, concentration camps for migrants, etc. How does the Marxist Center understand this particular political terrain, and how will they intervene in it?

And although the idea of unifying local struggles into a national initiative is certainly auspicious, as socialists in the U.S., a greater focus on internationalism is necessary. We also need a discussion of what strategy is needed to beat back the right-wing offensive and topple the capitalists.

Also auspicious is the comrades’ idea of organizing communities and workers from below, transforming the working class into the subject of its own political practice. “Base building”, however, can encompass everything from urban gardening to tenants’ unions to (potentially) workers’ councils. But the emphasis on such methods of local organizing ignores or simply elides important political questions, as mentioned above, as well as many of the bigger questions of revolutionary strategy. What kind of party or organization do we need? How can we crush capitalism and end exploitation and oppression? What is the relation between social movements and labor movements? How do we understand internationalism?  What kind of strategy is needed to win? The Marxist Center doesn’t give a clear answer.

Organizational questions should be dealt with politically: What kind of tasks do socialists set for themselves? And what organizational forms are necessary to accomplish these? A community garden, of course, requires very little centralism. But we think the left has to organize itself in combat organizations to confront the police, the bosses, the bureaucracy and the state. Democratic centralism is nothing more than the discipline that the class struggle and the capitalist state, with its repressive mechanisms, impose on a left that wants to forge organizations that can beat the capitalists. Democratic centralism, which in contrast to the bureaucratic caricature practiced in the ISO, means that the members of an organization need to work out their strategy together and implement it together.

This approach—a lax approach on big political questions, while focusing on internal democracy—appears very attractive to a swath of former ISO members. But revolutionary organizations are built for situations of crisis, abrupt changes and mass mobilizations. A lack of strategic agreements means that organizations will fall apart precisely when they are needed most. This is why we believe that the autonomist strategy of the Marxist Center does not present a way forward for the U.S. left—but this comradely debate does not prevent us from working together with the groups aligned with the Marxist Center wherever possible.

The contradictions at the conference were shown at the closing event. After a speech by liberal author Naomi Klein, participants performed Assata Shakur’s powerful chant. But, the Socialism Conference had always ended with the “Internationale,” so there was a bit of a shocked silence when the program ended without it. A few former ISO members took up the song and maybe 100 chimed in, while most conference participants streamed out into the foyer. This was not a bad image for the conference itself, with many turning away from the traditions of the revolutionary workers’ movement, but a hard core looking for ways to reorganize. In this moment one could see quite clearly the reformist and the revolutionary “souls” of the U.S. socialist movement.

We believe that socialists need to fight to build up a revolutionary party based on agreements about the most important phenomena of the class struggle. As Left Voice, we are committed to organizing a new revolutionary socialist project that combines the best of the Leninist tradition with lessons from the U.S. and international left. We welcome contributions from others to help chart the way forward.