Socialism Has Trump on Edge. Rightfully So.

Trump and the right wing have been sounding the alarm about the growing threat of socialism. That’s good news for everyone who cares about the future of humanity and the planet. 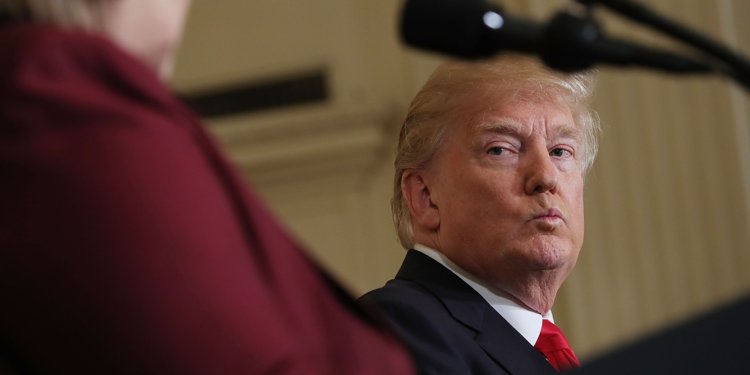 This year’s Conservative Political Action Conference, known as CPAC, was abuzz with one—unexpected—idea: socialism. Nearly three decades after the Cold War ended, no other topic had the right talking more than the growing socialist threat to our nation. Panels titles included “AOC’s Green New Deal: Debunking the Climate Alarmism Behind Bringing Full Socialism to America” and “How the Left Does It: Money, People, Technology & How They Sell Socialism With a Smile.” Both Vice President Mike Pence and White House Economic Adviser Larry Kudlow addressed the conference decrying a new socialist agenda in the country.

This hand-wringing over a new socialist threat echoes what Trump has been saying for months. “We are alarmed,” Trump said in his January State of the Union address, “by new calls to adopt socialism in our country.” It’s a curious statement at first glance. After all, there are less than a handful of Congress members who identify as “democratic socialists” among many hundreds more who are firmly pro-capitalism. No self-described socialist serves as governor of a single state or even mayor of a major city. When Trump declared that “America will never be a socialist country,” he was met with applause on both sides of the aisle.

The administration’s campaign against socialism did not end there. While beating the drum for intervention in Venezuela, Trump has also sought to undermine socialism itself. In a speech last week, Trump proclaimed, “Socialism is a sad and discredited ideology rooted in the total ignorance of history and human nature, which is why socialism, eventually, must always give rise to tyranny.” We are now, he went on to say, in the “twilight of socialism.” But if socialism has become so discredited in the United States and around the world, why can’t conservatives stop talking about it? Why does Sebastian Gorka, former adviser to Trump and a top speaker at CPAC, call socialism “America’s biggest problem”?

The Usefulness of a ‘Socialist Threat’

To begin with, we must note that the S-word has long been a club that Republicans use to beat over the heads of their political opponents, even when almost no Democrats proclaim themselves socialists. Recall how President Obama was derided as a socialist by conservative pundits and figures like former House Speaker John Boehner. Yes, the same Obama who bailed out the big banks in the wake of the 2008 crash and gifted health insurance companies the Affordable Care Act a few years later. The same Obama who took hundreds of thousands in campaign contributions from Wall Street and whose cabinet was filled with former investment bankers and hedge fund managers. In truth, no serious Republican figure believed that Obama was a closet socialist, but it was a useful line of attack, particularly among the party’s white, suburban and upper-middle-class base—managers, small-business owners and the like—who have a firm interest in preserving capitalism. Tying Obama to socialism allowed the right to combat even the most timid social and economic reforms proposed by Obama during his term.

In the case of Venezuela, there is an important political objective behind linking the crisis in the country to socialism. Venezuela was never a socialist society, which even the Trump administration must be aware of. But by connecting the shortages and inflation that have afflicted Venezuela in recent years to the inherent flaws of socialism, Republicans and even many Democrats have sought to discredit the ideal of socialism in the eyes of the American people. It was not the fall in oil prices, not the blockade and not even the mismanagement of the Maduro regime that is behind the misery of Venezuelans, we are told, but rather the “socialist” system, which always ends in failure.

A Socialist Wave in the U.S.?

The right’s fears of a socialist wave do, however, appear more valid now than they did during Obama’s days in office. After all, Bernie Sanders, a self-described “democratic socialist,” won more than 13 million votes nationwide in the 2016 Democratic primaries, and he has built up in only 10 days a war chest for the 2020 campaign larger than any other candidate’s. The campaign announced recently that it had signed up more than 1 million volunteers for the coming campaign season, in every congressional district across the country. Another democratic socialist, Alexandria Ocasio-Cortez, not only scored the biggest political upset of the primary season but quickly became one of the most recognizable political figures in the country, particularly among young people.

Yet, Sanders and Ocasio-Cortez are still the exception. Prominent Democrats like Nancy Pelosi and Hillary Clinton, and even more progressive figures like Elizabeth Warren, Sherrod Brown and Kamala Harris, have explicitly made it clear—they are no socialists. And even with the “socialist” rhetoric of Sanders and AOC, neither has any intention of overturning the rule of capital. Instead, they aim for a Scandinavian-style social democracy, with improved wages and public benefit programs, a higher tax rate for the biggest corporations and a greener national infrastructure. Neither figure would challenge the fundamental underpinnings of the capitalist system. Even under the most “radical” proposals of these figures, the property of the country’s largest corporations—companies like Amazon, Walmart, General Motors—and the fortunes of their executives would go untouched. Neither do they propose an end to the state’s repressive forces like the military, the prison system or the police. Where, then, does the danger of socialism lie for Trump?

For starters, even modest tax hikes or increases in wages proposed by the so-called democratic socialists in Congress threaten the profits of big business and are cause for concern among their representatives in Washington. Particularly in times of capitalist crisis, when productivity and capital accumulation is low, profitability can only be increased by driving down wages or implementing austerity so as to slash taxes. This is precisely how the 1% has continued to accumulate wealth during even a historically weak economic recovery. Any disruption of this model, no matter how modest, becomes unacceptable for corporations and those who represent them.

But there is also a serious fear that the rhetoric of Sanders and AOC will continue to awaken socialist aspirations among young people and workers. After the Sanders campaign in 2016, tens of thousands of youth flocked to the Democratic Socialists of America, a previously marginal organization with fewer than 5,000 members nationwide. AOC’s primary victory last summer brought many thousands more into the DSA. These young people may become increasingly impatient with the very figures who drew them toward socialism when it becomes clear that the strategy proposed by Sanders or AOC has no chance of achieving meaningful reforms. Achieving gains like wage increases or an end to student debt requires class struggle—strikes, mobilizations, blockades—which is not the strategy of Sanders or his allies. And as youth and working people begin to discover the immense power of these weapons, the balance of power will begin to shift dramatically.

The danger of socialism for the rich, therefore, goes far beyond figures like AOC or Sanders. In fact, true socialism has always been the greatest fear of the ruling class, greater than any terrorist threat or any foreign power. Socialism would mean that that corporations could no longer profit off the exploitation of their workers, through ever longer hours and ever more grueling work. It would mean that industries would be democratically run in the interests of the many, not the few. Socialism means a planned economy that would carry out production only in an ecologically sustainable way, rather than treating nature as the source of free raw materials for capital or as dumping grounds for its waste products.

Racism, sexism, homophobia and xenophobia could no longer be used as a tool to divide and conquer the working class. A socialist society would be one in which women are not relegated to working as unpaid and overworked caregivers, but one in which the care of children and the elderly and domestic tasks would be socialized, that is, they would be the responsibility of society as a whole. Socialism has no use for the police, mass incarceration, immigration authorities or any of the forces used to harass and brutalize oppressed people and the poor. Democrats and Republicans have tried to counterpose freedom and socialism, but true socialism would mean a society more free than any that has ever existed. So Trump is right to fret about socialism. It’s precisely why we should fight for it with everything we’ve got.