Socialists Should Not Vote for Joe Biden

Voting for neoliberals won’t lead to meaningful victories on any of the issues that matter to working people. Nor will a Biden victory save us from the real dangers posed by the far right, which grew substantially during Obama’s smooth-talking neoliberal presidency. 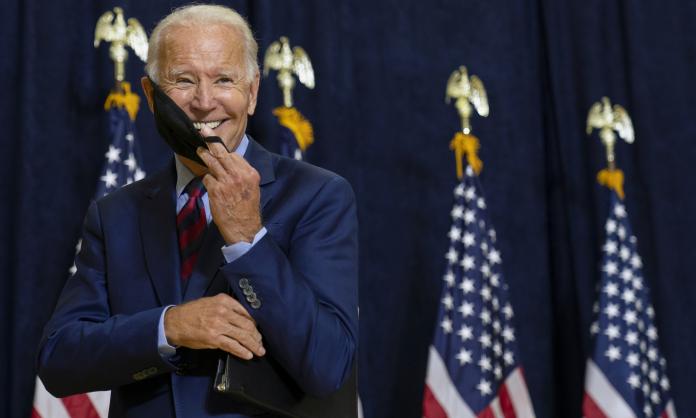 This article was originally published in Red Flag on October 8

As the US presidential election draws nearer, the pressure to fall in behind Joe Biden grows ever greater. Predictably, most of the social democratic and liberal Left are promoting the former vice president, even if some remain squeamish about formally endorsing him. More surprising has been the unprecedented step taken by a number of respected socialists, most notably Dan La Botz, to advocate voting for a man who called on police to shoot Black Lives Matter demonstrators in the leg.

In almost every case, the rationale is the same: Donald Trump is a unique threat and must be stopped at all costs. In a despairing article for New Politics, La Botz raises the spectre of a Trump coup and dictatorship as a reason to vote for Biden. La Botz is far from alone in emphasizing the danger that Trump, with his undeniable affinity with the far right, poses to US democracy.

“The central polarization in the country today is between a Trumpist bloc driving toward authoritarian rule vs. a majority opposition that, for all the vacillations and differences within it, is defending the democratic space that movements for justice, peace and radical change require to advance,” former Maoist Max Elbaum writes at organizingupgrade.com. “The 2020 election will determine which force will hold governing power.”

Reasonable people can disagree about whether Trump is a fascist, but it is ludicrous to think that a fascist coup or fascist government is in the cards in the United States. Arrayed against Trump are substantial sections of the state machinery, most important of which are the military generals, and large sections of the capitalist class. There is simply no need or appetite for a dictatorship among the US ruling elite: they are getting fantastically wealthy and face no internal threat to their rule. While far-right sentiments are clearly growing among sections of the Republican base, their organizations are weaker than at most other times in US history. Almost every major attempt by the far right to mobilize in recent times has been dwarfed by BLM rallies or counter-demonstrations organized by anti-fascists.

It is accurate to say that Trump is giving confidence to the far right with his rambling bigotry. And it is undoubtedly true that Trump is trying his best to steal the election using all means at his disposal (this is hardly a new development in US politics). But we should be clear about what the current, slightly hysterical establishment campaign against Trump represents. Uniting billionaire bigots such as Mike Bloomberg, hack Republicans such as Anthony Scaramucci, neoconservative national security state war hawks and upper middle-class suburbanites, the so-called “never Trump” movement is not a genuine defense of democracy or the rights of Black voters, women, migrants and workers. Rather, they want Trump out because he endangers their imperial alliances and the legitimacy and credibility of the US state.

Even if he’s not a fascist, many argue that the Trump administration has been so damaging to workers, minorities and the left that even a neoliberal Biden administration would be a step forward. This is not borne out by the facts. Trump has killed far fewer people in the Middle East than did presidents George W. Bush or Barack Obama. He has deported a fraction of the undocumented migrants. Much is made of the stacking of the courts with conservatives, a shift that will undoubtedly have a long-term impact on US society. This is nothing new. Republican legislatures in a number of states have been doing that for decades, undermining the rights of workers, women, LGBTI and others in the process.

A piece by Stephen Shalom recently published at Tempest magazine puts forward a more systematic defense of voting for Biden, arguing that the partisan make-up of state institutions has a significant bearing on the lived experiences of those over which they govern, and that it is therefore preferable to have a lesser evil against which to organize.

The piece champions Biden, Hillary Clinton, Obama and Al Gore against their Republican rivals, but the obvious conclusion is that socialists in the US should support Democrats across the board. For if it is better to have a lesser-evil president, then surely it is better to have a lesser-evil mayor, governor, district attorney, sheriff and so on. By the same logic, you could argue that the left should intervene into the Republican primaries to prevent another Trump from emerging victorious. (Is Joe Biden really that different to Jeb Bush?)

But even without reaching that absurd end point of Shalom’s argument, there are substantial problems with his article. The first is his tendency to put a positive gloss on Democratic Party policies. “Yes, Biden opposes socialism and our radical agenda,” he writes. “But he doesn’t oppose our defense of DACA or our rejection of leaving the Paris climate agreement, the Iran deal, and nuclear arms control agreements, or our opposition to Homeland Security forces in Portland, or our call for Covid to be addressed with science, or our battle to protect reproductive rights and LGBTQ+ rights, etc., etc.”

To hold up Obama’s policies in this way is ludicrous. He was responsible for the largest build-up of nuclear weapons in decades, and he deported a record-breaking 3.2 million undocumented migrants. Elsewhere in the piece, Shalom suggests that socialists should vote to elect Biden because there is little time to avert climate disaster—yet Biden has refused to commit to concrete measures that would curb the use of fossil fuels.

A more fundamental point Shalom asserts is that Democratic officeholders are more responsive to social movements than the Republicans. As evidence he points to the civil rights legislation passed by the Kennedy and Johnson administrations in the 1960s and the New Deal reforms of the 1930s. In response, you could point to Obama’s violent repression of climate and Indigenous activists trying to stop the construction of the Dakota Access Pipeline, or his defense of the police in the face of the first Black Lives Matter movement. You could also explore the long history of Democratic governance—indeed, Black Democratic governance—in US cities, which has done little to address class and racial inequalities.

But the real debate is not whether Democrats are in every instance exactly as reactionary as Republicans. Democrats have a basic electoral interest in staking out a more progressive image for themselves, reflecting in a distorted way the grievances of their poorer and more racially diverse constituencies. It is also no surprise that reforming Democrats have been elected to office at times when the left has been relatively strong and the demands for change widespread. This is a natural dynamic in liberal democratic capitalism, reinforcing the myth that demands for justice and change can be met within the system by electoral means. The real debate is whether socialists should reduce themselves to cheerleaders of the more competent and enlightened spokespeople for big business.

Any real effort to get out the vote necessarily entails exaggerating Trump’s strength, and minimizing Biden’s conservatism. Hence the proliferation of pieces, like Shalom’s, that downplay the crimes of previous Democratic (and even Republican) presidents. It also explains recent pieces by Bhaskar Sunkara in the Guardian and Branko Marcetic in Jacobin, which cynically advise the neoliberal Biden on how to wring votes from distrustful millennials, making a mockery of the Democratic Socialists of America’s formal position of refusing to endorse Biden.

What emerges from these articles and arguments is a profound sense of defeat and demoralization on the US Left. They have largely abandoned the goal of social transformation and have chosen to prettify the neoliberal pig.

Socialists should not accept the lowering of our political horizons in this way. We currently face enormous global economic and health crises, the growing likelihood of imperial conflict between major powers and the terrifying prospect of climate change. Nothing short of a fundamental transformation of the entire system can resolve these issues. Voting for neoliberals won’t lead to meaningful victories on any of these fronts. Nor will a Biden victory save us from the real dangers posed by the far right, which grew substantially during Obama’s smooth-talking neoliberal presidency.

Marxists have a different approach to fighting the nihilistic bigotry of fascism and the far right. At its core, this requires mass movements that can popularize an alternative political ethic based on working-class solidarity and anti-racism, and achieve radical transformation of society in the process. That starts by refusing to accept that politics is a choice between two sides of a fundamentally reactionary ruling class.