TODAY, Trotskyists will fill a stadium of 20,000 seats in Buenos Aires. Live updates on Left Voice! 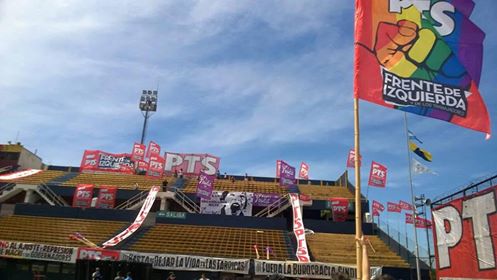 Follow it on Left Voice! Trotskyists Fill a 20,000 Seat Stadium

TODAY, in Buenos Aires City, the Left and Workers Front has organized a historic rally at Atlanta stadium- a stadium that can fit 20,000 people. Combative workers who fight the bosses and the union bureaucracy will be in attendance, including workers from Zanon, the factory that has been under worker control for the past 15 years and MadyGraf, a printing factory under worker control for two years. There will be women who mobilized for the #NiUnaMenos protests and called for work stoppages and a suspension of university activities as a protest to gender violence and femicides.There will be the dozens of elected officials– four in the national congress and many in city councils. These officials all receive the same salary as a teacher and donate the rest of their money to community and workers struggles. In the most recent election, presidential candidate Nicolás del Caño (PTS) won 3.27 percent of the vote (a higher percentage than both Gary Johnson and Jill Stein last week) with the campaign slogan, “Capitalism can’t go on!” . The FIT also has four seats in the National Congress and dozens of city council representatives.

The Left and Workers’ Front is an electoral coalition of three Trotskyist political forces: the PTS (Partido de los Trabajadores Socialistas—Party of Socialist Workers), PO (Partido Obrero—Workers’ Party) and IS (Izquierda Socialista—Socialist Left). The three organizations are united under a program that emphasizes class independence in an anti-capitalist struggle to build a socialist workers’ government.

This is the biggest left rally in 30 years in Argentina.

Organized by the Trotskyist Left in Argentina, this mass assembly demonstrates the people’s willingness to fight and resist capitalism and repression while continuing efforts to build a working class alternative.

A working class alternative rooted in anti-oppression and class struggle is urgently needed in the US. The right wing has made important political advances in the past months, with the right wing coup in Brazil, the Brexit and now the election of Donald Trump. This should serve as a warning to the international left and give urgency to the need to organize- “anti-establishment” cannot be only associated with the right wing. We should not let economic discontent be channeled by a racist demagogue. We must offer a leftist solution to a brutal capitalist economic and political establishment. The mobilization in Buenos Aires serves as an example to the US left, showing that we do not have to rely on a reformist program to reach thousands or even millions.

Today Left Voice will be live streaming coverage from the mobilization, as well as uploading intereviews and video footage of the event. Follow this historic event on Left Voice .