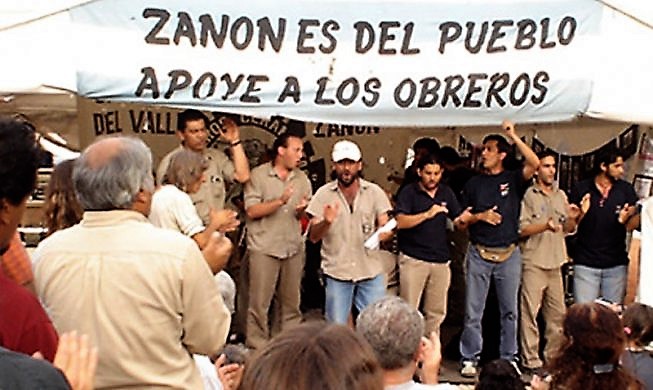 Workers’ self-management at Zanon ceramic tile factory is nearing its 15-year milestone of struggle and production. In the face of the current “tarifazo” (massive hikes in electricity and gas prices) and financial hardship, Zanon workers have launched a national and international campaign to establish a Solidarity Fund in defense of workers’ self-management at the plant. Below is a letter from the workers of Zanon bajo control obrero (Zanon under worker control), calling for solidarity and donations.

In Defense of Worker Self-Management

After almost 15 years of workers’ self-management, we are still fighting to defend our jobs.

Brothers and sisters, we are approaching 15 years of workers’ control. In 2001, in the context of a very deep crisis that was felt across all of Argentina, we ceramic workers struggled to defend our jobs. We fought to stay the hand of the Zanon boss who tried to lay off his employees, flee with the profits from their labor, and leave a long line of unemployed workers and an empty warehouse in the Industrial Park of Neuquén behind him.

We embarked on a struggle that was led by the Ceramic Workers’ Union (SOECN), the union which we were able to reclaim in the interests of the workers only a year before. In this struggle, our union was a fundamental tool: the democracy of mass assemblies carried us forward in unity and organization.

At that time, Argentina was undergoing the deepest crisis it had seen since the return of democracy in the early 1980s. With almost 50 percent of the population below the poverty line, laid-off workers organized themselves into movements of the unemployed and fought for a paltry welfare plan just to survive, while all around them was job insecurity and daily factory closures. In this context, the most important thing for us was to recognize that we were fighting to ensure that we did not become another unemployment statistic. We could not resign ourselves to this employer who left us in the streets like so many–those who had no tools to fight back.

We understood that our struggle could not happen in an isolated fashion. We knew that we needed to be with all those who were taking up the fight; to forge unity of action so that, together, we could confront the attacks that all workers faced.

Taking the struggle into the streets, engaging with the community, and making them understand just what we were fighting for was one of our fundamental tasks, because it was from that understanding that we were able to open up the struggle, mobilize and coordinate with other sectors and establish a STRIKE FUND that enabled us to get by when they wanted to break our struggle with hunger.

In the face of this uncertainty, we took the fate of the factory into our own hands. Alongside the families that joined us to resist, we resumed production at the factory and gave life to Zanon bajo control obrero (Zanon under workers’ control).

Then, we fought ceaselessly until we achieved the expropriation of the factory, without ever losing our sense of belonging to our class. We continued fighting shoulder-to-shoulder with the compañeros and compañeras from different sectors, defending education and the public health system, democratic rights, while always keeping our political independence from the bosses’ parties and the state institutions that sought to make our struggle and experience disappear.

After 15 years they still have not managed to defeat us, but they are still committed to doing away with what we have built. For many years, we have known that what is needed for us to win is to update the technology in the plant: the Zanon factory is over 30 years old. With our outdated machinery, it is very difficult to maintain production in a capitalist market that generates permanent inequality. For workers’ control at Zanon, this is a challenge that we have ahead of us. All levels of government in Argentina have systematically denied us access to credit. Despite these odds, we are still manufacturing our products, meanwhile passing from crisis to crisis.

Today, while we remain on our feet. We are moving through one of the worst moments we have experiences as a worker-controlled plant. The new conservative government is applying brutal austerity measures to working people while at the same time favoring close friends in the business sector. All this has made conditions for workers’ control at the factory incredibly complicated.

As a consequence we have once again taken up the fundamental tasks of our struggle, and are taking every action that we can take to defend our jobs. We once again appeal to the solidarity of each and every person who has taken inspiration from our workers’ self-management at Zanon, who understands that this is an alternative with which to confront factory closures, and who understands that unemployment comes as a result of government and business austerity.

In our factory assemblies, we decided to launch a major campaign in defense of Zanon under worker control and set up a strike fund that will allow us to keep both this experience of self-management and the families who depend on it alive.

With this letter, we call on you to stand with us once again, so that we can defend this historical struggle. For we understand that this is no isolated struggle; it is part of the conquests that the working class has won against those who oppress and exploit us.

In advance we say to you, thank you very much.

Other articles about Zanon:
What Would a World Without Bosses Be Like?