Solidarity with Dauno Tótoro, a Young Leftist Leader Persecuted by the Chilean Government

The young leader of the Chilean left is persecuted for having called for Piñera’s resignation in a public assembly. 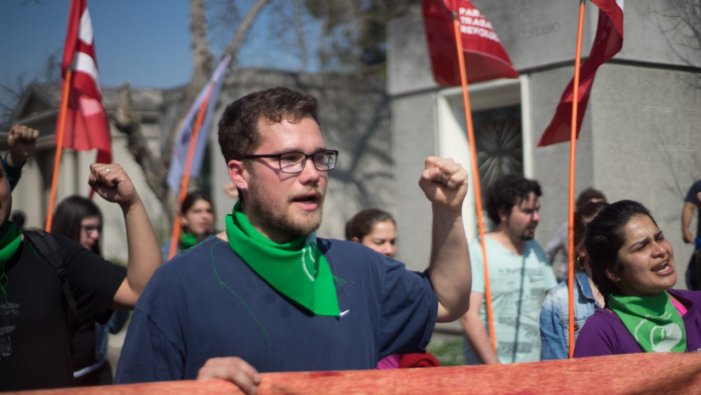 The young leader of the Chilean left party, Partido de los Trabajadores Revolucionarios (Revolutionary Workers’ Party, PTR) has been persecuted for having called for the resignation of President Sebastián Piñera in a public assembly. The president’s resignation has been a widespread demand of the Chilean people since the revolts against the subway fare hike initiated a popular rebellion against neoliberalism and the Chilean regime.

The lawsuit brought against Tótoro has been declared invalid by the 7th Court of Guarantees of Santiago, but the city government is challenging the decision before the Court of Appeals. The 7th Court of Guarantees—headed by Judge Daniel Urrutia—established that the facts indicated in the complaint “are framed in the legitimate exercise of freedom of expression enshrined in the Political Constitution of the State and the international human rights treaties ratified by Chile” and that “what has been reported does not constitute a crime.”

The state, however, is claiming that Tótoro’s words “incited subversion.” In this way, the government pushes a line of political persecution against dissident voices. As those who have supported Dauno Tótoro have expressed during this week, if Piñera’s government takes this line to the end, it should imprison the great majority of a country that has demanded his resignation.

The young leader stated that the government seeks to politically persecute those who demonstrate against it: “in this country you can persecute and prosecute for political opinion… This is political persecution on the part of the government. Today it’s against me, but tomorrow, it could be anyone,” Tótoro said.

Broad sectors of the Chilean left are demanding an end to the political persecution of Dauno Tótoro, the preemptive imprisonment of teacher Roberto Campos, and all judicial proceedings against the young people and workers who have mobilized during these days of revolt. They demand the immediate release of all detainees and prisoners. Numerous artists, political personalities and social and human rights activists have expressed their solidarity with Tótoro, such as musicians Ana Tijoux and the group Inti Illimany, author Jorge Baradit and Communist Party congressman, Hugo Gutiérrez.

These repressive measures are an attempt to silence the popular mobilization that is confronting the continuity of neoliberalism in Chile. Repression and human rights violations have failed to subjugate the workers and people of Chile. The left in the US needs to support the mobilization of the masses in Chile and the struggle against political persecution by the government of Sebastián Piñera.