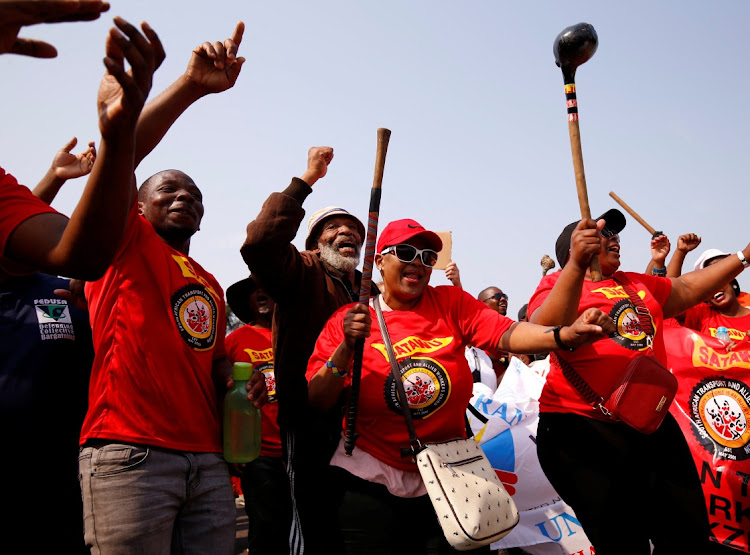 Logistics workers in South Africa went on strike on October 6. These workers can provide a powerful example of the strategic role of the working class — especially logistics workers — in fighting inflation.

The struggle is taking place at Transnet, a port and freight-rail operator, and it has paralyzed exports, including coal, iron ore, chrome, and manganese. Port workers are not just essential to South African exports. The country’s ports are also used heavily by other African countries such as the Democratic Republic of Congo (the world’s biggest source of cobalt), Zambia, and Zimbabwe.

The strike is being coordinated by two major unions, the United National Transport Union (UNTU) and the South African Transport and Allied Workers Union (SATAWU). The UNTU began its strike October 6, and SATAWU joined on Monday, along with several smaller unions. As the strike kicked off, protesters held a solidarity march outside Transnet’s Cape Town facility. The unions began negotiations with Transnet on Wednesday, centering their demand for a pay raise to keep up with the rising cost of living. The strike will continue while these negotiations take place.

South Africa, the continent’s most developed economy, was greatly hit by the economic disruptions of the COVID-19 pandemic and the war in Ukraine. The country’s current inflation rate is 7.6 percent. With basic costs of living becoming more unattainable, Transnet offered a measly 1.5 percent pay increase. The company also falsely claimed that the strike is illegal.

It is unclear how far Transet will go to attack this strike. Whatever the case, the workers are well positioned to fight for their demands. Mining companies are already whining that the strike is affecting their sales. The Kumba Iron Ore company says the strike will hobble 50,000 tons a day of exports for the first week, and Thungela Resources — the country’s biggest shipper of thermal coal — says two weeks of strike will curtail as much as 300,000 tons of export.

As the pandemic showed, the whole economic system depends on the constant exploitation of workers, and logistics workers in particular. It is no wonder that as a result of the contradictions of the international capitalist system, we are now seeing logistics workers around the world flexing their power. So far, logistics strikes to fight the rising cost of living have largely been taking place in Europe, including port strikes in the United Kingdom and Germany.

While austerity hurts and even threatens the lives of workers in the Global North, the inflation crisis is especially acute in the Global South. For the most part, workers and poor and oppressed communities of the Global South have been fighting rising costs of living with protests and uprisings. South African workers are now showing how their tradition of militant class struggle can be wielded in subjugated countries to fight the economic burdens capitalist crises are imposing on workers.

How South African workers fight their cost of living crisis may even provide important lessons for the United States, where the working class is just beginning to regain its consciousness after decades of defeats. For example, the United States has its own potential freight-rail strike brewing, but so far union bureaucrats have worked with President Biden to avoid militant class struggle. They have done so by negotiating a tentative agreement that did not address workers’ main demand to be given more days off. Even now that rank-and-file rail workers rejected the deal, the union bureaucrats are promising they will put off any threat of strike until November so that they can negotiate with the state to further avert class struggle. In contrast, South African workers went on strike days before the unions were set to negotiate with the state.

The lessons that South African workers can provide will be essential for newly politicized workers fighting inflation in the heart of imperialism, such as the UPS Teamsters who are preparing for a contract struggle that could change the balance of forces for the U.S. working class. It is important for leaders of emerging labor struggles and movements against austerity to follow and amplify this strike in South Africa, both as a show of solidarity and to ensure that those waging similar struggles are studying what will likely be an important example of class struggle in the face of global recession.