South Korea’s Tollgate Workers’ Struggle: A Guiding Star for the Next Battle

As the valiant fight by South Korean tollgate workers comes to a close, a worker who joined solidarity efforts from day one reflects on the struggle’s peaks, limits, and lessons for the road ahead. 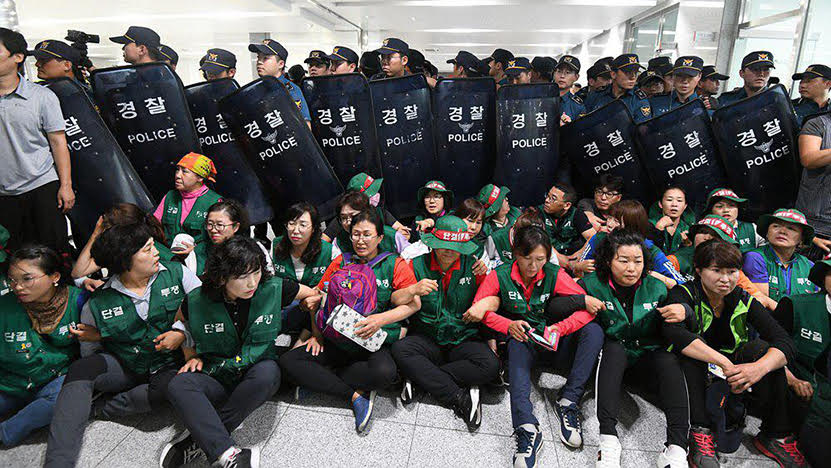 As exploitation and suppression remained a strong force, the struggle grew ever fiercer. Women workers struggled relentlessly, despite the marginalized position they are forced to inhabit. They exposed the painful realities stacked against irregular, disabled, and women workers, and fought with pride. The workers halted the fraudulent behavior of the Moon Jae-in Administration and revealed its counterfeit regularization policy. The government’s attempt to exert its authority was quickly diminished by the vigorous workers at their sit-in protest held at the headquarters in Gimcheon.

The range of solidarity and social support for the tollgate workers’ bold and devoted struggle was unprecedented. The struggle led to a lawsuit against unfair dismissals, as well as an increase in the number of workers directly employed (versus subcontracted) by Korean Expressway Corporation. The first round of this great struggle has come to a fruitful end: on January 31 the workers held a general assembly and ended their strike.

Few would have expected the tollgate workers to put up this much fight when their struggle began in June 2019. Against extraordinary odds, they showed inexhaustible courage and the power of workers’ solidarity was shown.  Every worker – exploited and oppressed in their respective field – can follow this example and put forward a struggle as powerful. There is no other option. Our struggles can expand into something great. What can stop us when we unite the power of workers?

There are surely unbreakable walls, even for the tollgate workers. Our disappointment and frustration in an inconclusive end to the fight is clear. The Korean Expressway Corporation (KEC) announced on December 17, 2019 that it would directly employ its workers which was only made possible when the tollgate workers sued the corporation for unfair dismissals in 2015. However, the KEC announced in its provisions that it would fully retract its initial offer if the court ruled in favor of the KEC.

Due to its vicious trick to deplete workers until the end, the tollgate workers did not win direct employment. As a result, the remaining issues of workers’ compensation and damages could not be resolved. In addition, the KEC rejected further consultations on wages and job duties. Without reaching any agreement, the workers had to return home. 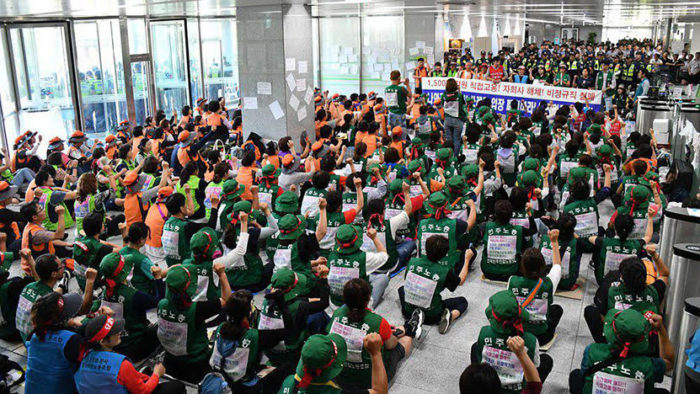 …Though we gave our all

The seven-month struggle undoubtedly left workers in pain and exhaustion. The vision for a continued struggle, as well as the strength of solidarity to overcome barriers, did not take root. By the time a union delegate conference was held in Gimcheon to plan a general strike on September 23, 2019, the South Korean government had already changed its mode of attack to siege and isolation, from suppression. The level of solidarity in the struggle from the union was not enough to break the government’s siege. The Korean Confederation of Trade Unions (KCTU) failed to provide the necessary leadership to expand its frontline and unite workers employed by other subsidiary companies. Combative workers who supported the toll workers’ struggle from below also reached their limits when it came to expanding the struggle to unite all workers.

After every crucial curveball, the workers never gave up their cause: full, direct employment for all. In October 2019, the Euljiro Committee of the ruling Democratic Party of Korea stated, “The decision to directly hire toll receptionists can be determined by up to two trials; the decision to directly hire workers can be determined by one trial. Until the verdict is received, both toll receptionists and workers must work as temporary workers.” Such arbitration proposal garbage was settled by the Federation of Korean Trade Unions (FKTU). The KCTU unequivocally rejected the proposal. Some tollgate union members thus disaffiliated from the FKTU and joined the KCTU to continue the struggle together.

However, the leaders of the struggle allowed the Euljiro Committee to act as the mediator, as opposed to vehemently opposing that it play any role in the process. The leaders created further chaos by suggesting that union members who joined after 2015 were subject to the initial court ruling. The struggle weakened after December 2019 as they only clung to the negotiations.

History in the making

Nevertheless, the resistance displayed in the tollgate struggle will never diminish, but continue to shine. Workers gave everything they could. The struggle was neither inertial nor formal. For over a hundred days, toll receptionists and workers resisted severe heat waves, monsoons, and storms as well as isolation and repression by the police and Korean Expressway Corporation. Some workers occupied the highways. On June 30, 2019 dozens of workers joined by supporters started a sit-in protest on the roof of the Seoul tollgate. The occupation was in full force.

The fight continued on, despite arrests and injuries – a fight unwavering enough to push through the police lines at the Blue House (presidential palace). At the peak of struggle, they occupied the KEC Headquarters in Gimcheon. Summoning all of their might, workers fought against the police. In spite of their shame, the toll workers took off their clothes in protest against the violent crackdown. Their drastic determination and will to fight could stand comparison with the history of the Korean labor movement.

Those workers who believed there were limits for the labor movement at the headquarters in Gimcheon continued their fight in Seoul. Ultimately, the key to victory was in the political struggle against the government.

Beyond KEC President Lee Kang-rae, the workers had a reason to pressure the ruling Democratic Party of Korea. On November 7, 2019, workers occupied the offices of Kim Hyun-mi and Lee Hye-chan. The struggle reached its next destination at Gwanghwamun while workers continued their face-to-face confrontation at the Blue House. They fought to break through the police line almost every day, as if drilling through iron walls. Even after nationwide efforts, they occupied up to 20 Democratic Party offices. The workers incessantly continued the solidarity struggle. In honor of the series of jockey suicides under the Korea Racing Authority (KRA), namely the death of Moon Joong-won, the inexhaustible workers shed light on the corruption and irrationality of KRA while struggling for the collective liberation of all workers.

Proudly, we march on

“Every time I shouted, ‘Direct employment for all!’ I found a sense of self I had lost while working as a toll receptionist. The past of Baek Heung-yi now belongs in the past.” (Excerpt from the Seoul Tollgate Cultural Festival, June 30, 2019). 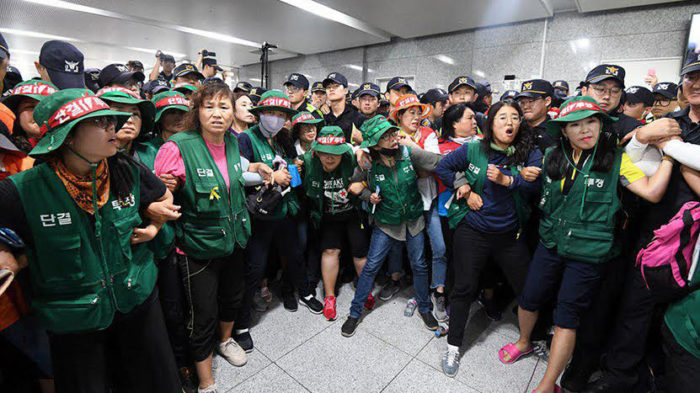 Rather than being dragged around and deceived by the Moon administration, workers opened the path where they can relentlessly and proudly fight. For those questioning whether the freedom of workers lies in the hands of the Moon administration, the answer is a decisive no. Take a look at the struggle of tollgate workers. The so-called progressive Moon administration protected the KEC and its president Lee Kang-rae who laid off 1,500 workers. The capitalist government will do what a capitalist government does: protecting subsidiary companies and promoting labor reform laws. The police acted as the KEC’s military and arrested workers four times a month at the Blue House.

In order to transform the material lives of workers, we must face the government and the ruling class head-on. We must gain political independence from the Democratic Party and the government.

The tollgate workers did not flinch for one second in the face of the government. They have marched on shouting, “Fuck subsidiary companies!” in solidarity and struggle. We must simply continue on with our fight. With a mix of pride and disappointment, the first round of the struggle has come to a fruitful end. In opposition to the Moon Administration’s subsidiary companies and their deceitful regularization policy, however, the second round must continue on until we eliminate all irregular and subsidiary jobs. Round two should not be waged alone by our comrades in the struggle of tollgate workers – it should be a battle fought by all of us. We pay homage to all tollgate workers who carved out a starting point of the new path to collective liberation of all workers.

This article was originally published by the Militants for Workers’ Liberation (NoHeTu) in South Korea.