After a homophobic hate crime, thousands take to the streets. 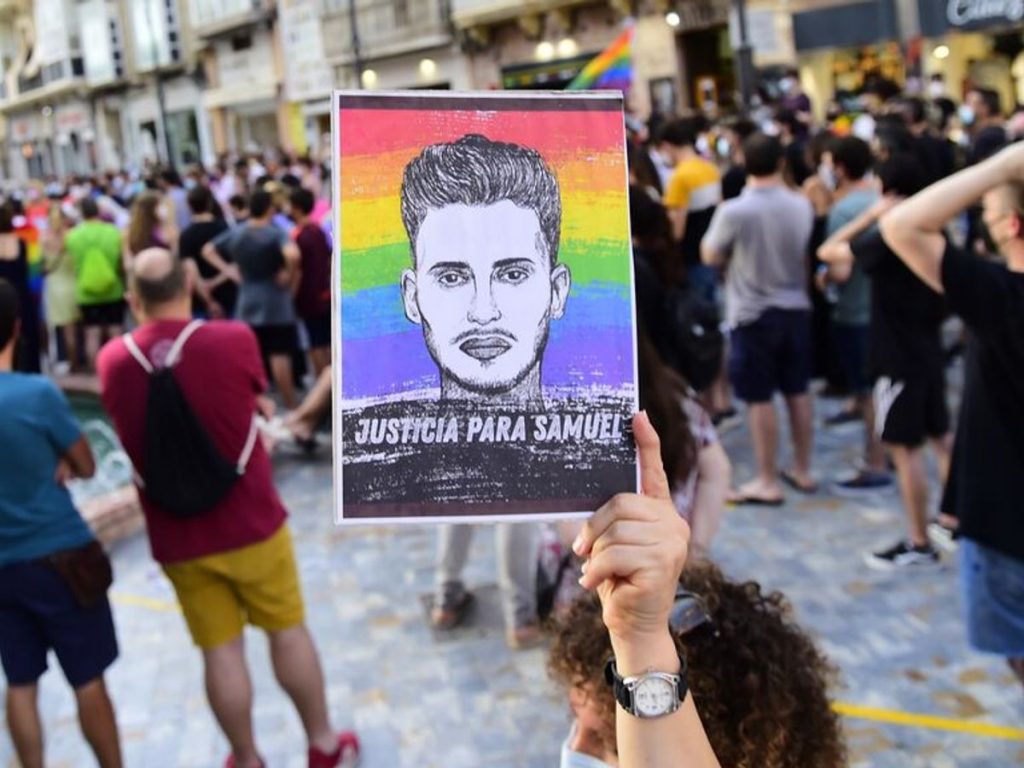 Samuel, a 24 year old nurse’s assistant, was murdered just a few days before the anniversary of the Stonewall uprising in the city of La Coruña, Spain. He was beaten to death outside a nightclub, and a witness told Spanish media that Samuel was called a “faggot” when the attack began.

#JusticiaParaSamuel began trending, and in dozens of cities, mass protests were held demanding justice and repudiating homophobia. Their slogan: “He didn’t die, they killed him” — which points to the crime’s homophobia.

These protests have been met with police violence. On Monday night, the National Police repressed demonstrators in the Argüelles neighborhood of Madrid, even driving a van into those who remained in the streets and beating protesters with batons. This makes clear that LGBTQ+ cops and their participation in pride marches only drapes this repressive institution in rainbows.

Interior Minister Fernando Grande-Marlaska, of the PSOE–Unidas Podemos government, justified the repression. “Violent events occurred that determined the need for police action,” he said. In other words, despite being part of a “left” government and despite being gay — Grande-Marlaska is recognized as Spain’s first openly gay judge — he justified the repression of demonstrations using the same language as reactionary sectors and governments.

Finally, on Tuesday, the police arrested three suspects. According to the government of Galicia, they are considered “alleged perpetrators of the violent aggression that ended Samuel’s life,” but the government did not say how exactly they participated in the brutal attack, since there are seven presumed attackers.

The spread of Samuel’s murder on social media brought to light many more cases that also went viral, including a homophobic aggression by the Madrid police that same night and the multiple occasions when victims who report an LGBTQ+phobic aggression are scorned and ignored by police or judges.

The socialist feminist group Pan y Rosas (Bread and Roses) declared, “We do not believe that justice will come from the patriarchal, reactionary, and Francoist judicial apparatus of the Spanish State. The feminist movements’ slogan ‘If they touch one, they touch us all’ is already well known. We also want to say ‘If they touch one, we organize thousands.’”

The same repression that we suffer inside and outside the law as soon as we cease to be profitable, is the repression suffered by the working class and youth when they protest, as well as by migrants or anyone who challenges this regime, heir of Francoism, even if it is painted in pink one day a year.

We call to organize a united front against LGBTI-phobia and repression, a front that is anti-racist, anti-fascist, anti-patriarchal, and anti-capitalist. We must continue organizing as widely as possible, independently of the government and its institutions, in schools, workplaces, and neighborhoods. We must do so not only to demand justice for Samuel and defend ourselves from aggressions from those in or out of uniform, but also to fight the patriarchal and capitalist system that is killing us and attacking our lives every day.”