On June 5, Spanish dockworkers began the first of a series of strikes that will see eight days of strike action over three weeks. These strikes have been called in response to the conservative government’s new Royal Decree Law that targets the country’s port labor system, and the stevedoring companies’ refusal to protect the jobs of 6,150 currently employed dockers. 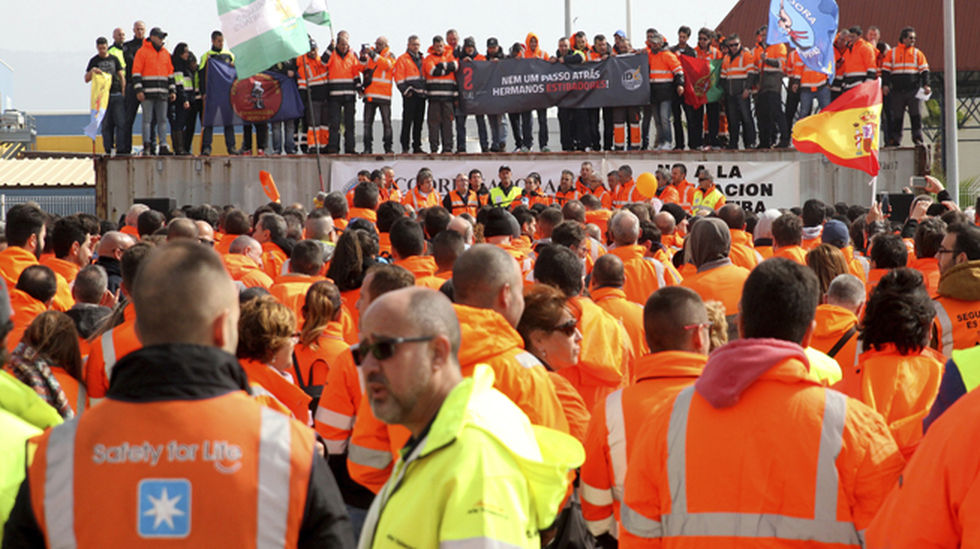 The jobs of over six thousand Spanish dockers are now in jeopardy. The conservative Partido Popular (People’s Party) government has succeeded in getting its new Royal Decree Law, which targets the country’s port labor system, approved by the Spanish parliament. This legal victory has given stevedoring companies the upper hand in their efforts to liberalize the port labor system. All this has left Spanish dockers with little option but to take strike action in order to defend their jobs.

Spanish dockworkers’ unions struck on June 5, 7 and 9. These strikes follow a traditional pattern on the Spanish docks, where strikes take place on Monday, Wednesday and Friday on alternating hours across a 24-hour period, that is, one hour working, then one hour where work stops and so on. Next week will see a 48-hour strike from June 14 to 16. The strikes on June 19, 21 and 23 will follow the same hour on / hour off pattern as those in the first week.

Over the last few months, Spanish dockers’ unions have repeatedly announced numerous planned strikes, only to call them off in a show of “good faith” to parliamentary legislators and company negotiators. However, both the conservative government’s definitive legal victory and the port employers’ pigheadedness would suggest that this tactic has run its course.

After much difficulty, Prime Minister Mariano Rajoy and his conservative Partido Popular government have succeeded in getting their anti-docker Royal Decree Law approved in the Spanish parliament.

The government’s first attempt to have these laws approved was blocked by the Spanish Congress of Deputies on March 16. Threats by dockers’ unions to exercise their industrial muscle saw parliament reject the original decree law by 175 votes against, 142 in favor and 33 abstentions.

For more on this, see: “Dockworkers: the “can do” of the working class”.

Nevertheless, the tables were turned just two months later. On May 18, a modified version of the government’s legislation was approved by 174 votes in favor to 165 against with eight abstentions. The center-right parties of Ciudadanos (Citizens), the Basque Nationalist Party and the Catalan European Democratic Party who had previously either abstained or voted against now sided with the government.

For the conservative Partido Popular administration, this parliamentary victory means two things. Not only does it bring to an end the continually accruing fines that the EU has imposed on the Spanish government but more importantly, it guarantees the phasing out of the current hiring hall-style labor system which Spanish dockers have worked under for decades.

Under the current system, all dockworkers belong to the Port Stevedores Management Company, known by its Spanish acronym SAGEP, similar to the hiring halls of longshore workers in the United States. The European Court of Justice has ruled that this system does not abide by EU regulations, and in July 2016 fined the Spanish government 15.6 million euro plus additional daily fines of 134,000 euro for every day that the system remained in place. The government’s May 18 decree law meets EU requirements and brings the accumulating EU-imposed fines, now almost 25 million Euro to an end.

For more on the SAGEP system and the ECJ rulings see: “Over Six Thousand Spanish Dockworkers’ Jobs Face the Axe” .

Iñigo de la Serna, the Minister of Public Works and Transport behind the decree law claims that it “guarantees employment for dockworkers”. Yet in the next breath he stresses that the “European Commission does not allow” for “subrogación,” agreements that guarantee all existing dockworkers’ jobs and working conditions, which is the central demand of the dockworkers’ unions. Dockworkers’ unions argue that these new laws go much further than was needed to comply with the EU requirements and now pose a dire threat to the jobs of 6,150 currently employed dockers.

The Partido Popular’s new Royal Decree Law all but guarantees the extinction of the SAGEP port labor system. After a three year transitional period ending in May 2020, SAGEPs will lose their previous monopoly on the supply of port labor; stevedoring companies will no longer be legally obliged to take part in them; and individual SAGEPs will have to seek legal authorization to continue operating. Port employers will also be able to undertake direct company employment and hire labor from other sources if they so wish.

These laws do however allow for the creation of Port Employment Centers or CPE in Spanish, which could potentially play the same role as SAGEPs. But there will be no legal obligation for stevedoring companies to belong to them, and like SAGEPs in three year’s time, CPEs will also have to seek legal authorization before being established. Every existing SAGEP and CPE in three year’s time will also fall under the provisions that regulate temporary employment agencies. While these allow for fixed contract and indefinite employment, they also open the door to sweeping casualization across the industry.

These new laws also commit 120 million euros to the funding of an early retirement scheme. Spanish dockers can currently retire at 55 years of age, which is ten years earlier than most Spanish workers. This retirement scheme will allow dockers who are 50 years old and over to retire early and receive monthly payments of 70 percent of the average earned over the previous six months. These payments will increase in line with rises in state pensions and end once dockers hit 55 and are eligible for regular state pensions.

One of the few positives in the new laws is that they allow for either a state-sponsored accord or collective bargaining agreement to provide for subrogación, the rollover of all existing jobs and conditions.

Just days after the new decree laws were adopted, representatives of the stevedoring companies and dockers’ unions met on May 22 and drew up an in principle agreement. The port employers’ organization ANESCO (National Association of Stevedoring Companies and Ship Consignees) agreed to a guarantee of all existing jobs. In return, dockers’ unions agreed to a ten percent reduction in gross monthly salaries to 2,230 euros and further negotiations on shift changes and work organization in order to increase productivity. Unions have previously offered to accept a six percent pay cut just a week after the Royal Decree Law was first rejected back in March.

However, negotiations broke down at the next meeting on June 1. According to the dockers’ unions, the employers were now “giving contradictory signals with regards to the future of jobs in the sector” and proposing separate port-by-port negotiations instead of a national agreement.

It was after this breakdown in negotiations that dockers’ unions confirmed that the previously called strikes for June 5, 7 and 9 would go ahead, and further strike action on June 14-16, 19, 21 and 23 would also take place.

Solidarity with the Spanish dockworkers

Leaders of the different dockworkers’ unions (CETM, UGT, CC.OO, CIG and CGT)* have made it clear that their primary objectives are maintaining all current dockworker jobs, getting all port employers into the Port Employment Centers and converting these into a SAGEP-style system.

Spanish dockers’ unions certainly have plenty of industrial leverage with which to win these demands. As outlined previously in Left Voice , Spanish ports are a strategic sector of the Spanish economy, with over half of all Spain’s exports and nearly 80 percent its imports moving through them.

Along with their own industrial leverage, Spanish dockworkers will also need practical international solidarity from other dockworkers, especially their European and North African counterparts. Already dockers’ unions in Portugal, France and Italy have refused to handle any cargo diverted from Spain.

But the best chance of victory will arise with a fighting movement that unites Spanish dockers with all those currently struggling against Mariano Rajoy and his conservative government. For instance, Spanish taxi drivers have just held their own strikes along with a 20,000-strong demonstration on May 30, while campaigners for public education held a sector-wide strike on March 9 and demonstrations as recently as June 6. A movement that unites these forces not only has a better chance of victory, but it also has the potential to topple the minority conservative government.

More immediately, Spanish dockers need to take into account the disturbing signs coming from their own union leaders. For one, there is the tactic of repeatedly announcing and then calling off strikes over the last three months. After not having called one day of strike action since 2006, such a repeated on again, off again approach can only have a corrosive effect of dockers’ morale. Even more worrying is the willingness of Spanish dock union leaders to offer up pay cuts – first six percent and now ten percent – in exchange for a guarantee on jobs. “Watch your leaders”, the catch cry first popularized by British Communists in the early 1920s, appears to be just as applicable today as it was almost one hundred years ago.

For months now Spanish dockers have been chanting ¡Ni un paso atrás! (Not one step back!). In order to make this slogan a reality, Spanish dockers will need to use their potential to paralyze the Spanish economy and enlist the support of other Spanish workers and dockworkers from neighboring countries. They will also need to keep an eye on union leaders who have shown themselves too willing to concede unwarranted concessions to the port employers.