Spanish Elections on November 10: Vote for the CUP!

The Revolutionary Workers Current (CRT) calls for a vote for the Popular Unity Candidacy (CUP) in Catalonia and for a blank vote in the rest of the Spanish State. 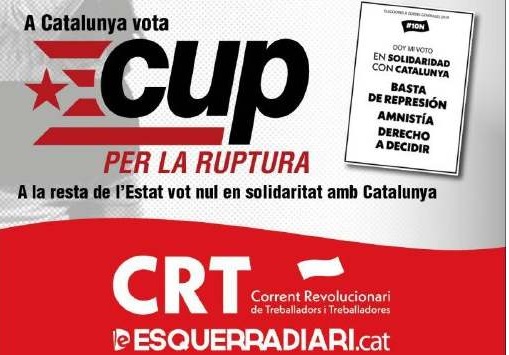 In the elections on November 10, the Revolutionary Workers Current (CRT) calls for a vote for the Popular Unity Candidacy (CUP) in Catalonia. In the rest of the Spanish State, we call for a spoiled ballot in solidarity with Catalonia, against repression, for amnesty, and the right to decide.

All the parties of the regime are pressing for a stable government of “order.” They want to solve the “organic crisis” of the 1978 regime from above. They are reinforcing the authoritarian system with the harsh sentences against the Catalan independence leaders and the escalating repression against democratic rights.

The Catalan people, led by the youth, have resisted this reactionary restoration. There have been strikes, roadblocks, mass demonstrations, and resistance against police violence.

The Catalan government, the Govern, and Catalonia’s  bourgeois parties (ERC, PDECAt y JxCat), which sent us home during the demonstrations in 2017 and are now repressing us in the streets, have thus far taken 40 political prisoners. They are the same parties that have governed for decades in the interests of big business, and continue to do so.

“Processism,” the bourgeois parties’ roadmap to independence, is being challenged. There is an opportunity to build a roadmap for the working class, the youth, and the popular sectors.

The left that organizes around the call for “change,” from the neoreformist party Podemos to the municipal electoral alliances Comunes, limits itself to the goal of forming a government together with the social democratic PSOE. This would be a government of Article 155 (which suspends the right to autonomy), the Spanish stock market IBEX35, and precarious working conditions. This is why they call for compliance with the sentences against the Catalan independence leaders. They criminalize the protests and justify the police interventions of recent weeks.

The Popular Unity Candidacy (CUP) in Catalonia is the only political formation that has supported these mobilizations unconditionally and has refused to criminalize the youth. It denounced the repression of the Govern and its parties, demanding the resignation of Catalan Interior Minister Miquel Buch, the dissolution of the riot police (BRIMO), and the dismissal of the police, who have left more than 600 people injured.

The CUP’s objective is to block the ongoing attempt to impose a reactionary solution from above to the crisis of the regime. It defends three programmatic axes: the right to self-determination, amnesty, and social rights. This separates the CUP from the “lesser evilism” shared by the neoreformist left and the parties of the Catalan bourgeoisie.

The pro-independence left has the opportunity and the responsibility to draw all the lessons from 2017 and this second Catalan autumn. It can build a political alternative that will allow us to develop the self-organization of the workers, the youth, and the people. It must reject the old policy of alliances with the parties of “processism.”.

The CUP should also address the left in the Spanish State: they must stop believing in the “lesser-evilism” of the PSOE in order to build an anti-capitalist and working-class left that is prepared to fight the next government. This is the key to winning amnesty and the right to self-determination, and being able to open up constituent processes that can really decide everything.

published in Spanish and Catalan on October 31 on IzquierdaDiario.es and EsquerraDiari.cat.