The Spanish State has been a constitutional monarchy since 1978. Starting today, students from more than half of the country’s public universities are demanding a right to decide about an anachronistic, anti-democratic, corrupt and patriarchal institution. 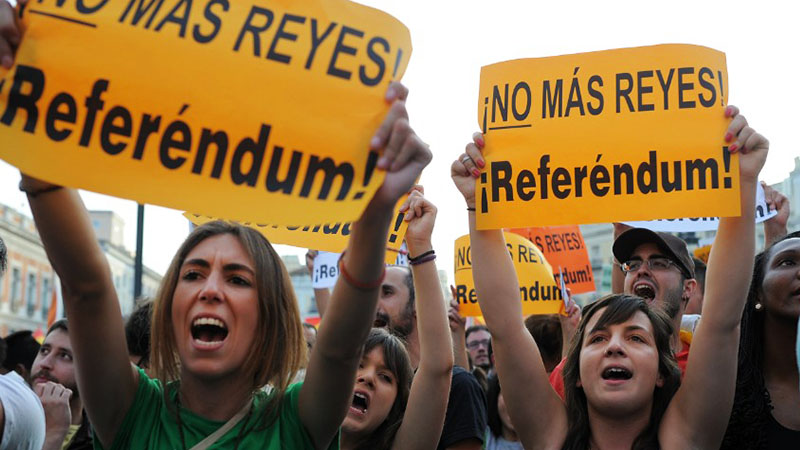 The monarchy – yes or no? That is the question. Starting this Thursday, students at 26 universities will be holding referenda. The first one was held at the Autonomous University of Madrid (UAM), one of the top universities in the Spanish State, on November 29. All students as well as academic and non-academic personnel are invited to participate. Further votes will take place at 25 more institutions during December and January. That represents more than half the country’s 50 public universities.

The original campaign, “Reférendum UAM”, was formed by students from different departments. Their goal is “to make young people’s opinions heard regarding an anachronistic, corrupt institution which is linked to the Franco regime.”

Younger generations have been questioning the Crown more than ever before. “We young people are sick and tired of hearing about the inviolability of a constitution which was approved long before we were born,” said Marcos, a history student and activist of the youth group Contracorriente.

Lucía Nistal, an academic researcher and spokesperson of the feminist group Pan y Rosas, added: “While the king raises his salary, they are cutting the budgets for education. It’s time they let us decide if we want to keep maintaining this absolutely anti-democratic and patriarchal institution.”

These last Tuesday, students held a press conference with representatives from universities in Madrid, Barcelona, Zaragoza, Alicante and other cities. “We want this debate to take place at universities so they stop being places to maintain the status quo, and instead become the critical centers at the service of social transformation that they should be”, their joint manifesto declared.

The first question in the referendum is: “Are you in favor of abolishing the monarchy as a model of state?” The second question will be: “In the affirmative case, are you in favor of constituent processes to decide what kind of republic is necessary?” Many students want the abolition of the monarchy to be part of a process of radical changes – more than just replacing the monarchical head of state with an elected president.

The Spanish monarchy ended in 1931 with the abdication of Alfonso XIII. and the proclamation of the Second Republic. General Francisco Franco organized a coup against the republic in 1936 and won the civil war three years later. Franco ruled Spain as a military dictator for almost four decades, and then hand-picked Alfonso’s grandson, Juan Carlos, as his successor. A constitutional monarchy was established in 1978. This constitution created the “regime of ’78”, with the support of the Social Democrats and the Stalinists, which exists to this day.

Now, Juan Carlos’ son Felipe VI is on the throne. Felipe is the successor of the successor of a murderous fascist dictator. The monarchy has entered into a deepening crisis in recent years – not just because of endless corruption scandals, but also because of Felipe’s firm rejection of the rights of the Catalan people to any form of self-determination.

The Revolutionary Workers’ Current (CRT), the section of the Trotskyist Fraction in the Spanish State, has been at the forefront of these campaigns, As Marxists, they combine radical democratic demands (starting with the abolition of the monarchy) with a program for the expropriation of capital. This referendum is not limited to the question of the monarchy – it is about questioning the entire regime of ’78.