Over 100 incarcerated people in a St. Louis jail rose up and fought back against the oppressive criminal justice system to protest unsafe conditions 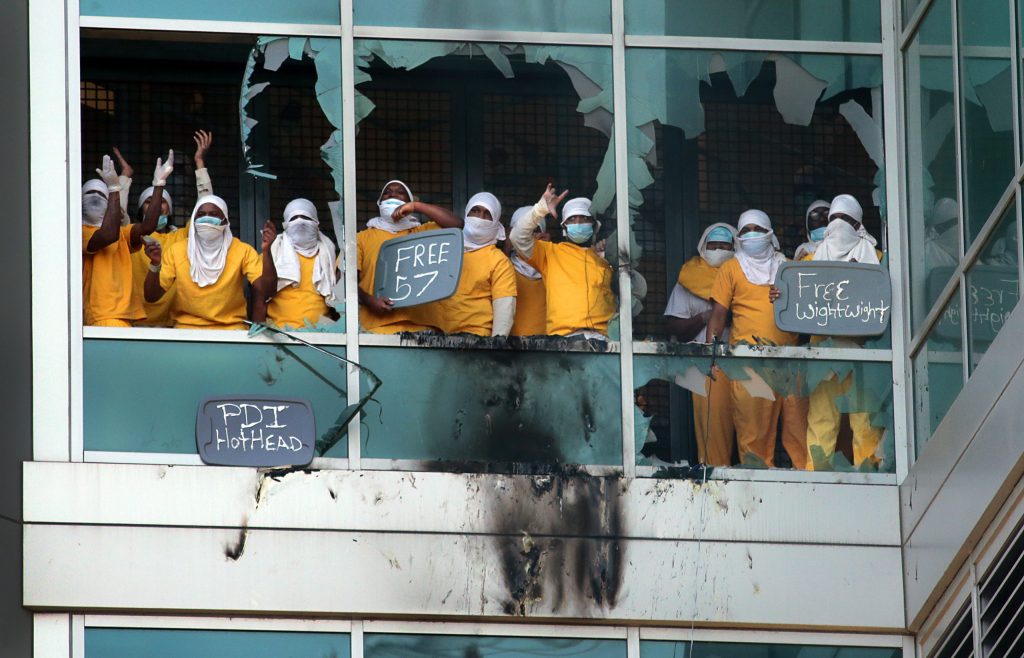 On Saturday at the St. Louis City Justice Center, 117 inmates on the facility’s fourth floor took over their entire wing for several hours, taking advantage of the prison’s faulty lock system to stage an uprising that temporarily overwhelmed the prison’s guards. One guard sustained minor, non-life-threatening wounds in the initial scuffle early Saturday morning, but otherwise no one was injured during the hours-long occupation. Indeed, the rioters had very clear intentions: to protest the conditions in the prison, particularly the extra burdens they have shouldered during Covid-19. Inmates clogged drains to flood the floor and set fire to many items in the unit, rendering all but one cell uninhabitable. They made their demands known to the media by breaking the prison’s exterior windows and displaying messages of protest written on the lids of storage bins.

The Justice Center, which locals refer to simply as “city jail,” holds a high number of “pre-trial detainees,” people who have not been convicted of a crime but are nonetheless incarcerated and awaiting trial — a system that persists even during a pandemic and turns the practice into a viral superspreader. The population of the Justice Center reflects the racist workings of the justice system, incarcerating poor people and people of color at much higher rates, even in the absence of criminal convictions. Because of the inability to socially distance or maintain quarantine in such overcrowded, underfunded prisons, the high risk of Covid-19 is turning any time in jail into a potential death sentence.

Prison and civil authorities have offered typically racist characterizations of yesterday’s events as random violence, a desire for “criminal mayhem,” casting the 117 inmates as rabble-rousers who are “out of line” for protesting the terms of their incarceration. However, the overwhelmingly non-violent nature of the uprising suggests a more disciplined action, with clear rationale and goals. Even the prison authorities admitted that the event was not a hostage situation or one in which prisoners threatened violence if their demands were not met. Instead, the signs displayed through broken windows referenced other inmates who had been moved in response to two previous disturbances in the same prison within the last month. Prison authorities speaking about these disturbances treat them as meaningless acts of aggression, but neglect to mention that conditions have not changed and that demands have not been met.

In Missouri, as elsewhere, Covid-19 has become an excuse for further abuse of prisoners and denial of their rights. The St. Louis County prosecutor proudly announced that Covid-19 precautions would not hinder pressing any charges, and that prosecutions of already incarcerated people would take higher priority. Family visits were curtailed, and Missouri continues to trample the rights of parolees. After a short push to release a very small number of prisoners (based on very strict criteria, such as age, health status, severity of offense, and sentence length), many counties in Missouri have increased their prison populations during Covid-19, leading to some of the state’s worst outbreaks.

Not only have most prison systems refused to heed calls for mass decarceration during Covid-19, most are subject to the same withering austerity budgeting being imposed on states and municipalities across the country, and measures to ensure the health and safety of inmates are never a priority. While socialists stand in solidarity with all incarcerated people, and condemn in particular the refusal to decarcerate prisoners during the pandemic, we also demand an immediate end to the dangerous and inhumane conditions in existing prisons. In our punishment-happy security state, a prison that can’t even address a known issue with faulty locks will hardly find the resources to tackle such low-priority issues as the health and safety of its inmates. The only real way to ensure prisoners’ safety is to get rid of the locks, guards, and prisons entirely.

Even in the face of armed guards, they were able, however briefly, to seize control of their situation, keep one another safe, and broadcast their plight to the outside world. By forcing the locks, the inmates forced the issue: because the state would not address unsafe conditions, the inmates made the prison unliveable. Their demands for justice and safe living conditions are a perfect embodiment of the chant heard last summer, “If we don’t get it, shut it down!” All of us who joined the protests last year, and every union who said Black Lives Matter, should show support and solidarity for their struggle.