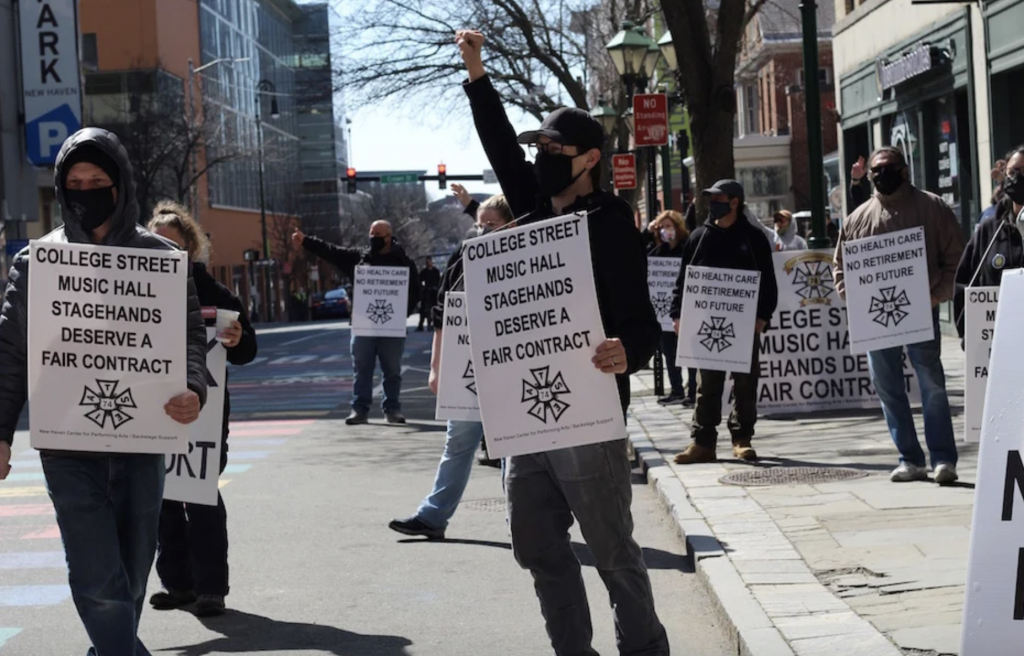 Stagehands in New Haven, Connecticut, have spent the past week picketing College Street Music Hall, demanding a new contract that includes health insurance, overtime, and retirement benefits. Employees at the venue say that across the street at the Shubert Theatre, the union contract guarantees all of those things. Last year, the College Street workers voted to join the International Alliance of Theatrical Stage Employees (IATSE) Local 74, but after nine months are still without a contract. According to the union negotiators, the key sticking points in the negotiations have revolved around health insurance, retirement benefits, and a standard hourly pay rate.

In the midst of the pandemic, the unemployment rate in the United States reached historic levels. IATSE reported in March 2020 that 95 percent of its members nationally lost work due to the coronavirus.

Currently, the New Haven venue uses a day-rate system, with workers paid a flat rate regardless of how many hours they work on a given day. The bosses do their best to get as much labor for as little money as possible. Across the street at the Shubert, extra hours means overtime pay.

The union has been able to continue covering health insurance for its members. Workers at College Street are asking for the same. At a time when stage work is scarce to non-existent, and so many people in the United States are dying each day from Covid-19, access to healthcare has never been more crucial for workers. “It’s about peace of mind. You don’t think about it when you have it,” said Gardner Friscia, president of Local 74.

College Street Music Hall is owned by the New Haven Center For Performing Arts, and its president and CEO Keith Mahler has been present for the contract negotiations. He says he has no plans for when the venue might open back up after Covid-19, but representatives of Local 74 say they know shows will return. They intend to have the contract ready beforehand.

“We know we’re coming back to work. We don’t want to work without a contract,” said Jim Shea, business agent for Local 74.