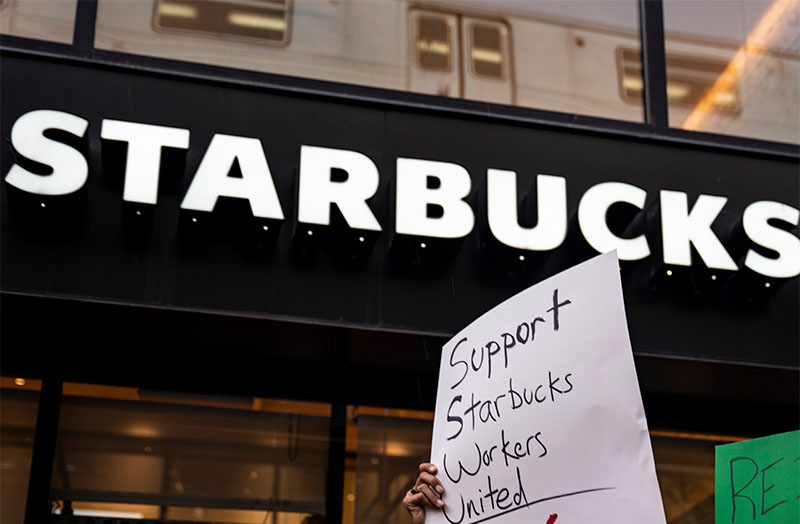 Joselyn Chuquillanqui was fired on July 27. She was working as a shift supervisor and had been a Starbucks employee for seven years. The alleged reason for her termination was “tardiness,” even though she was never more than 5 minutes late. She also says that once she got threatened with getting “written up for putting the wrong sticker on the side of a cup.” Unsurprisingly, she was one of the main organizers who was fighting for a union at their store located at 6 Great Neck Rd., Long Island, New York.

When asked about why she organized, Joselyn replied that,

Starbucks has been nothing less than hostile and toxic. So it’s been an experience there. A lot of it for me was the safety and health standards. I mean, if we’re talking about just COVID, there were definitely people who were working with COVID throughout the pandemic. Like they were so willing to expose us, our families and our customers to this virus without really caring about it. They just wanted more money. It was their profits over our health.

Back in May, 15 workers filed the petition to have a union, they were the first one to do it in Long Island. “There was 100% of people on board and 100% of people signed. But due to union busting from management, things changed,” Joselyn explained. Many workers changed their vote under pressure and lies, and as a result, they lost the election 5 to 6.

Taking advantage of the setback, and as the union challenged the elections, the manager saw it as an opportunity to get rid of one of the main organizers, striking another blow to the union drive.

Joselyn is just one of over 70 workers fired for organizing since February, but she is fighting back to be reinstated. Starbucks’ billionaire CEO, Howard Schultz, said a few months ago that the workers looking for a union were “outsiders”: people who got a job just to have a union. The more than 200 unionized stores are enough to debunk his lies, but the workers who are being targeted also expose the company’s union-busting practices. Like Joselyn, Sam Amato who led organizing in Buffalo was fired on August 5 despite having worked for Starbucks for 13 years. Brett Taborelli, who worked for Starbucks for eight years, was also recently fired in retaliation for being a vocal union organizer.

Shea, a shift supervisor in Pittsburgh, was fired for being two minutes late to a shift, and as she explains in her tweet, they served her the separation papers while she was opening the store. She was also involved in the union efforts and it didn’t matter that she needed access to medical care for her gender transition.

Starbucks is ramping up their union-busting tactics and we must fight back. Walkouts, strikes and rallies are happening across the country. In New York state, Joselyn is calling for a solidarity rally to protest against union busting and demand Starbucks to reinstate her. This will take place outside the Starbucks located at 6 Great Neck Rd. on Monday, August 15 at 7pm.