Starbucks Makes a “Mockiatto” of Fight against Systemic Racism

In a concerted effort to save its image as community-oriented, inclusive, and “woke,” Starbucks responds to the protests over the baseless arrest of Rashon Nelson and Donte Robinson last month by implementing a nationwide “anti-bias” awareness training for all its employees today. The company’s stated goal is to begin a process of addressing the problem of racial discrimination in their stores. 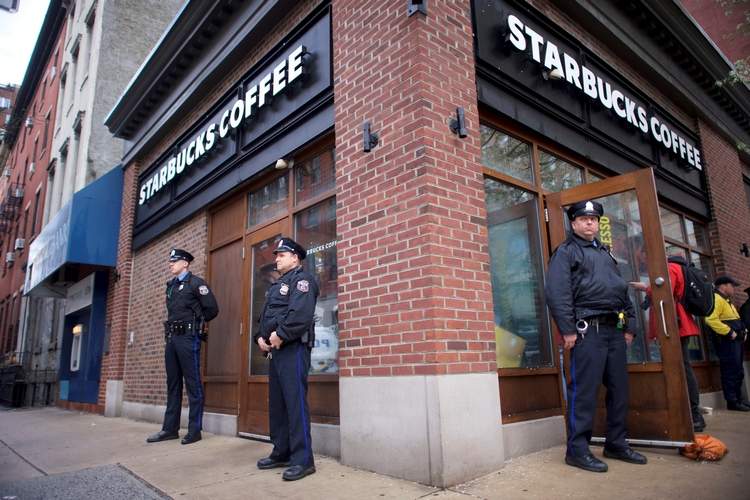 Perhaps the most frustrating thing about discussions of racism in the U.S. is that they often remain at the surface level with little consideration of the material realities that fuel racist discrimination and violence. The Starbucks debacle illustrates this problem. When two black men were arrested in Philadelphia on 04/12 for the “crime” of sitting in a coffee shop without ordering anything and then asking to use the bathroom, there was a swift and strong reaction from activists and the general public. As the incident reverberated through the media, protests were held outside and inside the store.

The wave of outrage that was sparked nationally led to the dismissal of the manager who had called 911 on the men within two minutes of their arrival, and it forced the company to develop a damage-control strategy that included official apologies and a personal meeting between the Starbucks CEO and the two men, Rashon Nelson and Donte Robinson, as well as a nationwide racial bias training session for all of their employees. What has been obscured in and by this massively-promoted corporate campaign, however, is the deep, structural reasons why incidents like this one occur all the time in restaurants and stores everywhere.

So this afternoon, in an effort to combat “unconscious bias” among its employees, Starbucks held sensitivity training sessions in over 8000 of its locations. In a video scheduled to be shown during the four-hour training session, chief executive Kevin Johnson explains to the 175,000 workers, euphemistically called “partners,” that “prejudice in public accommodation is deeply rooted in America”, and the rapper Common, who features in the video, encourages “folks to start exploring their own identities,” explaining that this is “Helping people see each other fully, completely, respectfully.” Employees were supposed to spend the remaining time completing worksheets in small groups.

From this description, it sounds like the problem of racism is once again presented as a moral or even a cognitive failure, specifically as a failure of the individual to properly understand their own identity and that of others and to appreciate that all identities are equally worthy. Unfortunately, this amounts to a complete distortion of the issue because racism is precisely not just a collection of false ideas about someone’s identity, or a misrecognition thereof, but a pervasive social reality that is indeed “deeply rooted” — but deeply rooted in the economic system in this country, i.e. capitalism, and the history of slavery and structural racism.

Now, why should anyone want to criticize an at least nominally well-intentioned effort by a company to address the issue of racism in this country and take measures to prevent calls to police that can end in people getting arrested for “sitting while black”? Given their open acknowledgment that this is only “the first step,” shouldn’t Starbucks be commended for embarking on the “journey” to “ensure it never happens again”?

There can be no doubt that the pressure put on Starbucks by the community groups that organized the demonstrations and sit-ins at the Philadelphia store have been effective in shining another bright light on racial discrimination and compelling this powerful company to not only admit that what happened was “reprehensible” but also to commit to putting together an educational program that places the events in the larger context of the history of the civil rights movement in the U.S. While this is most certainly an achievement, the struggle cannot end here because racism is not merely a problem of prejudice. Racism is also, and primarily, a system of oppression held in place by capitalism. As Malcolm X said, “You can’t have capitalism without racism.” Not only does the suffering of black people enable capitalists to make even greater profits as they take advantage of racial wealth and income disparities, capitalism also obviously benefits from a divided working class. Racist ideologies and practices have served to justify and reinforce structural injustice.

Along with its other image-saving efforts in response to the demands for change, Starbucks has issued a new set of policies, which clarify that henceforth any person in the store is considered a customer and will be allowed to use the bathrooms, unless, that is, a customer displays “disruptive behavior,” which includes “smoking, drug or alcohol use, improper use of restrooms and sleeping.” Further, there is now an “Addressing Disruptive Behaviors procedure” and a stipulation that 911 is to be called specifically “if a situation presents an immediate danger or threat to partner or customer safety.” These improvements certainly constitute a positive development. At the same time, however, the discussion needs to be pushed further. After all, capitalist businesses do not exist in a vacuum but in social spaces, and social spaces mirror the economic system and its material effects. American society is a class society, and, moreover, it is a class society in which economic inequality has always been a product not only of capitalist exploitation but also of racism This is visible everywhere, especially perhaps in big cities, which remain deeply segregated, largely due to redlining and other forms of institutional racism.

Philadelphia is no different from many other cities in that it has a high concentration of poor people of color. The Starbucks store where the two men were arrested is located in Center City Philadelphia at Rittenhouse Square. The park and the surrounding neighborhood is a bastion of affluence and privilege. Residents in this area of the city are among the highest earning in the country with a mean income of over $115,000. The area is also over 93% white. The proportion of black residents in Rittenhouse is 0%. This in a city that is 44% black. Philadelphia is also the poorest big city in the United States with a deep poverty rate of 12.3%. So when the manager decided to call the police on Nelson and Robinson almost instantly after they had entered, she was not only acting on the basis of racist assumptions and beliefs, she was also acting as the personification of capital and of structural racism, which capitalism perpetuates and relies on, and which cannot be explained away as the product of mere bigotry.

It is self-evident that a few hours of “guided discussions, reflection, and problem-solving” around racial “tolerance” and “respect” are insufficient means for overcoming racism. However, the fact of the matter is that no amount of even the most complex and sustained sensitivity training can achieve this. The reason why is because the approach itself is superficial and based on the notion, which is as mistaken as it is convenient, that racism is first and foremost a bunch of bad ideas or prejudices in people’s heads, from where they can be extricated and eradicated. Did this manager hold racist ideas? Most certainly, she did. These ideas may even have been more conscious than unconscious. We can and should hold her accountable for her actions, just like we should hold every other person accountable who actively contributes to the continued criminalization of black people, but we cannot pretend that individual people are the sole cause of racism. We cannot pretend that capitalist enterprises have not in fact always, and will likely continue to, shut out people whose presence is seen as hurting their bottom line, i.e. their profits. Starbucks executives say that their self-proclaimed “third place” (Home, Work, and Starbucks) is “open to all people,” but shouldn’t we ask: What about people without home, work, or money to afford coffee at the store?

It seems important to note here that part of the reason why Starbucks was so embarrassed is because Rashon Nelson and Donte Robinson were waiting in the coffee shop in order to discuss business — real estate — with a third party, a (white) businessman. In his apology, Kevin Johnson stated that the “two young gentlemen…. didn’t deserve this.”, but this begs the question: Does anyone deserve this? Who deserves to be viewed as automatically suspicious, to be harassed by management and police, to be kicked out of a store, and to be taken into custody when refusing to leave? Less ironic but equally relevant is the fact that Nelson and Robinson chose not to pursue a lawsuit, agreeing to a symbolic $1 settlement in exchange for a $200,000 grant program that the city of Philadelphia will fund for high school students who want to become entrepreneurs. Starbucks also promised the two men that it would use company “resources to advise their business ventures”. Nelson and Robinson, in other words, look like exemplars of the capitalist mindset that Starbucks represents, and their reconciliation with the city involves a program based on fostering this very mindset among the kids of Philadelphia.

The paradox is this: How can a capitalist mega-chain fix a problem of which it is itself a central part? The truth is that it cannot. Corporate “sensitivity training” is not the solution to racism because racism is a lot bigger than “unconscious bias”; it’s a history of exploitation, violence, marginalization, and exclusion. Starbucks says it wants to “work to be a different kind of company, a company that … believes that the pursuit of profit is not in conflict with doing social good,” but in reality the pursuit of profit stands in direct opposition to the good of most of society. In a profit-driven economic system, particularly vulnerable and oppressed populations will continue to be seen as creating “disturbances” and “trespassing” in places where they supposedly do not belong.

Ultimately, racism will persist as long as capitalism exists, and any capitalist mandate to weed out “unconscious bias” is going to remain mostly another public relations campaign that functions to distract us from the fact that poor people, especially poor people of color, continue to be pushed out of spaces where capital wants to sell its products or sees an investment opportunity, whether that be through gentrification, racial profiling, or more bogus 911 calls-. Our anger about episodes like the one at Starbucks needs to be red-hot, and it needs to be channeled into protest movements that won’t be pacified with a corporate apology, or the dismissal of an individual manager, or a grant for future entrepreneurs, or a few hours of videos and worksheets. Bias, conscious or unconscious, needs to be confronted wherever we encounter it, but the work of dismantling racism is a far more radical project, and it requires a total attack on the capitalist system that abuses, impoverishes, and discards people, and routinely brutalizes the most oppressed.