Denver Starbucks workers are fighting to unionize. The company has cut their hours, issued warnings, and spied on them. 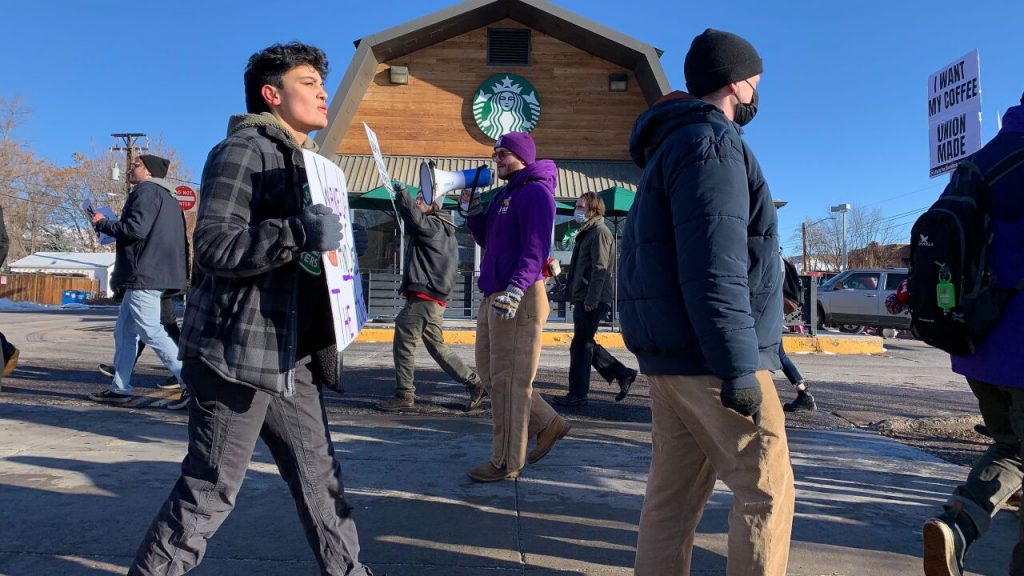 Workers from Denver’s East Colfax Starbucks went on strike Friday morning, protesting unfair labor practices and retaliation for their efforts to unionize the store. This strike comes a few weeks after a hearing with the National Labor Relations Board in response to their petition to form a union. The employees are still waiting for an election date for the union vote.

They are demanding an immediate end to the retaliatory and intimidating practices Starbucks has deployed in response to the union drive. The company has punished unionizing workers by cutting their hours, which in many cases threatens their access to benefits such as tuition reimbursement and health insurance. Workers have also reported that Starbucks has issued “baseless final warnings for alleged violations of vague and inconsistently enforced policies.” Additionally, workers have accused the company of spying on pro-union workers.

As shift supervisor Michaela Sellaro said at the strike, “I would like to see them stop union busting. I’d like to see them support partners when they ask for a better workplace. This is our right, and we’re here and we want it. So, stop messing with us.”

Starbucks has already shown a clear pattern of retaliation against workers who attempt to unionize. Last year, the National Labor Relations Board found that in 2019 and 2020, Starbucks had “unlawfully disciplined” and fired two workers seeking to unionize a store in Philadelphia. At a Buffalo branch, Starbucks sent dozens of “support managers” to surveil workers. In early February, Starbucks fired seven workers in Memphis who were involved in the unionization effort there.

And, like Amazon, Starbucks has put up a sleek website,“We Are One Starbucks,” full of typical anti-union propaganda. Relying on their practice of referring to all employees as “partners”, it stresses that unions are not needed because Starbucks can work “hand in hand” with their workers. Of course, it also pedals vague warnings about how “some things you value now might go away,” a typical threat that companies often make to workers who are attempting to unionize.

So far the baristas at the Colfax branch have received an outpouring of support from the community and local union members who have been turning up to show their solidarity. Educators from the Denver Teachers Union, for instance, came with signs that read “Denver Teachers Union Stands with Baristas!,” and walked the picket line with them.

The Denver Starbucks strike, like all of the organizing efforts at Starbucks stores around the country, shows that even workers in small workplaces can have a huge impact when they organize with their communities and fight together. All workers have the right to a union and to safe working conditions, and the Denver Starbucks workers are refusing to accept union busting or intimidation on the job. With rising inflation and a continuing pandemic, capitalists are desperate to get back to exploitation as usual, but the workers who keep society running are demanding more. These Starbucks workers are part of a wave of working class people who won’t accept business as usual — from the workers who walked out during #Striketober, the defiance of the Great Resignation, and most recently, the inspiring Minneapolis teachers’ strike.