Staten Island Amazon Workers Pull into the Lead, While Bessemer Re-Vote Is Too Close to Call

New York Amazon warehouse workers are ahead by hundreds of votes in favor of forming a union, while in Alabama the election is too close to call. The efforts reflect the momentum for organizing within Amazon’s vast network of warehouses. 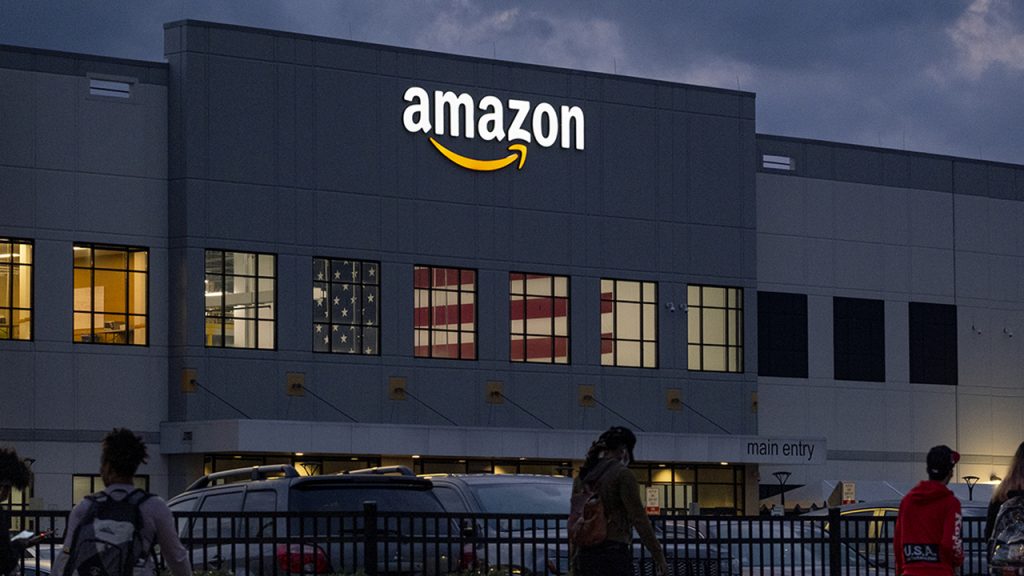 In initial vote tallies yesterday, Amazon warehouse workers in New York are ahead by hundreds of votes in favor of forming a union, while in Alabama the election is too close to call, pending a court hearing.

The vote at Amazon’s mammoth warehouse in Bessemer, Alabama, was a rerun of the election last April that the union lost by more than 2 to 1. The results of that election were thrown out after the National Labor Relations Board (NLRB) ruled that Amazon had illegally interfered with the vote.

This time, out of 2,375 valid ballots, 993 workers at the fulfillment center voted against joining the Retail, Wholesale and Department Store Union, while 875 workers voted in favor. There are 416 ballots being contested by either the company or the union, and 59 voided ballots.

“Every vote must be counted,” said RWDSU President Stuart Appelbaum in a statement. “Workers at Amazon endured a needlessly long and aggressive fight to unionize their workplace, with Amazon doing everything it could to spread misinformation and deceit.”

Meanwhile, the results of another Amazon warehouse union election on Staten Island in New York City showed a widening lead. Taking many by surprise, workers delivered a resounding “yes” to the Amazon Labor Union, an independent union of current and former employees at the sprawling fulfillment center.

There are still votes left to count. But ALU is poised to prevail in an unprecedented victory, with a strong majority so far voting for the union: 1, 518 yes to 1,154 no. There were 11 voided ballots. Ballot counting will resume tomorrow morning.

“The Amazon Labor Union is feeling the power of the people and the vote demonstrates our labor power and the hard work we’ve put into this campaign,” wrote Amazon worker Brett Daniels via text, with six out of 10 boxes of ballots counted so far.

In the coming days, we can expect a flood of articles exploring what factors contributed to the union’s unlikely success. But what’s clear so far is what organizer Dave Kamper wrote in 2020: “We don’t know why some workers step up and others don’t. You can take two workplaces with nearly identical characteristics; one turns into a union powerhouse and the other a dud.”

It certainly looked like a longshot election for the independent union. Amazon sowed skepticism among workers that ALU was a credible union with the necessary chops to negotiate a good contract, though the workers involved insisted their grassroots approach was their greatest strength.

“Amazon workers know best what conditions are like” in the warehouse, “so we know what needs to be changed,” said Daniels.

Throughout the voting period, ALU workers wearing “vote yes” lanyards and T-shirts talked to other workers in the cafeteria and at the bus stop. The challenges they had in common with their co-workers helped them to forge genuine bonds.

Under the bus stop canopy over the weekend, Amazon worker Karen Ponce said that she had initially been “brainwashed by Amazon’s propaganda” but that once she approached union organizers and they answered her concerns about dues, she joined the organizing effort.

She was worried about how much traction Amazon’s anti-union messaging had gained among workers, though. “I’m worried that a lot think they know about the union based off what Amazon is telling them,” she said. She felt that workers were “just too scared because the company literally bombards them with lots of propaganda.”

Staten Island Amazon worker Tasha Jones (a pseudonym to protect her from retaliation), said that in the days before the vote, managers at captive-audience meetings explicitly told workers to vote no. “They didn’t tell us at the beginning to vote no,” she said. “But I will say, the last meeting was something else.”

To counteract management’s messaging, Ponce would sit with co-workers in the break room to discuss their concerns over lunch. The organizing committee had 25 members; they did phone banking to amplify their reach.

“Deep in your heart, in your conscience you know, many things are wrong here,” she recalled saying in these conversations. She kept a running list of the issues her co-workers felt strongest about, including pay raises, work-related injuries, aching bodies, and limited unpaid time off.

Dale Wyatt started work at Amazon’s Bessemer facility last August after working at another warehouse distribution center where he earned $12 an hour. At Amazon he made $15.80 as a “stower,” the company’s term for a warehouse worker who scans items and places them on shelves.

But he soon realized that the grueling work conditions, long hours, and penalties for falling behind on performance metrics weren’t worth the higher pay.

“We’re standing on our feet for a long time,” Wyatt told me. “At my last job, it was an eight-hour workday. Here at Amazon, it’s a 10-and-a-half-hour workday, with a half-hour lunch break.”

Safety is a top concern. Wyatt has seen “exposed electrical wires on the conveyor belt system,” he said, and missing fire extinguishers.

“We had about three weeks ago a tornado warning that was forecast to make a direct hit on the building,” he said when we spoke in early March. “I heard from co-workers that some people were still on the work floor when it passed over.

“Fortunately, it was not on the ground, but the potential was—well, it could have been Illinois all over again.” A tornado slammed into an Amazon warehouse in Edwardsville, Illinois, in December, flattening the building and leaving six people dead and another hospitalized.

In another scary incident at the Bessemer warehouse, on March 25, vaporized oil spread through the warehouse after a compressor malfunctioned. Amazon told workers to continue working, according to a statement from RWDSU.

“At first I thought my glasses were just smudged, but then the air got thicker and my co-worker said he thought it was smoke and we should leave,” said Amazon worker Isaiah Thomas. “Everyone was very confused, and the lack of information made us feel very unsafe.”

Only 39 percent of the 6,143 eligible workers in Bessemer cast ballots, a lower turnout compared to last year’s 55 percent.

Fear was the overriding sentiment among the Alabama workers—the fear of losing benefits if they unionized.

In captive-audience meetings, anti-union consultants argued the RWDSU couldn’t deliver. They showed workers old contracts that the union had negotiated with other employers, such as Peco foods.

“They were showing us that their current contract only got them $13 an hour and some change, plus a 30-cent increase over a period of time,” Wyatt said. “They didn’t tell us what their benefits and wages were prior to contract negotiations. If they were paying minimum wage and then got a $6 increase, that’s a success story to me.” Alabama’s minimum wage is $7.25.

The union-busters’ goal was to convince workers they were already better off than other workers represented by RWDSU. But in today’s economy, with inflation eating away at workers’ earnings, Wyatt said, “$15 is a joke.”

The odds were greatly stacked against ALU and RWDSU. One union appears to have prevailed, while the other has faltered—at least until the contested ballots are counted. But both efforts reflect some momentum for organizing within Amazon’s vast network of warehouses.

“Unionizing Amazon was always going to be a difficult task because Amazon was built to be a union-proof company,” said ALU Vice President Connor Spence on March 26. “And on top of that, we were going into it with very little experience, no resources. We just tried to build a union from the ground up. The fact that we’re here is a victory in itself.”

“I don’t want to say anything concrete. I don’t know how it’s going to turn out, and I don’t think Amazon knows. But I’m optimistic. We definitely have a chance.”