States across the U.S. have been increasingly making healthcare policy and law based more in bigotry and control than in science and human rights. Over a dozen states are planning to institute near-complete abortion bans and many are trying to keep young trans* people from accessing transition healthcare. 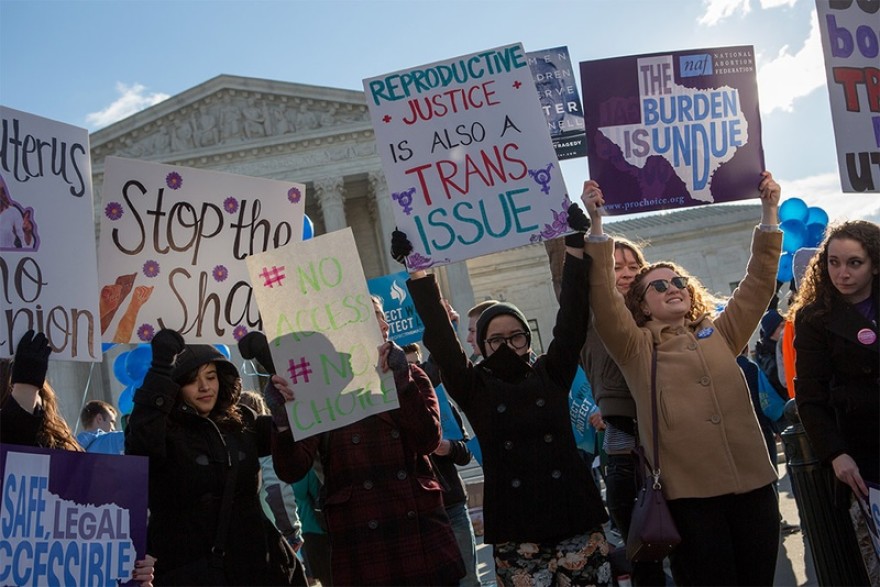 Arkansas Governor Asa Hutchinson recently signed an almost total ban on abortion in the state. The only exception is for cases where an abortion is necessary to save the life of a pregnant person. This makes it the most restrictive abortion ban in the country, though the new law cannot take effect until 90 days after the end of the current legislative session. Supporters of this ban hope that the inevitable legal challenge will make it to the Supreme Court, which Trump filled with far-right justices who conservatives hope will overturn the Roe v. Wade ruling, which prohibits abortion bans.

Similar bans have been proposed in a number of other states. Doctors in Alabama could face up to 99 years in prison for performing an abortion. Under this law, a rape victim would not be legally allowed to have an abortion, and a doctor who performed one anyway could face greater jail time than the rapist. Democrats in Alabama attempted to add a provision to expand the state’s Medicaid program, so that those forced to bear children could at least access healthcare. The Republican-controlled legislature refused it, showing once again that their purportedly “pro-life” stance is nothing more than an attempt to control women (and many trans* men and non-binary people along with them). Another bill in Texas even proposes the execution of anyone who gets an abortion.

These abortion bans are continually pushed while healthcare to help those who cannot get pregnant but want to is available only to the rich when it exists at all, and many parents working multiple jobs still don’t get paid enough to feed and house children, let alone enough for healthcare and childcare. People of means could travel to another state for an abortion, but those of the working class may not be able to. When professional abortions are made illegal, some might turn in desperation to unlicensed providers or attempt to do it themselves. Abortions that are not done with the proper skills, facilities, and equipment can be dangerous or even deadly. Currently, the vast majority of abortions in the United States are done safely and professionally, but that could change if more and increasingly restrictive bans take hold.

The Texas government also recently kicked Planned Parenthood out of the state’s Medicaid program as part of their crusade against abortion. Planned Parenthood provides primary healthcare to many working class people in addition to abortions and birth control. This has now been upheld by a local court and upon appeal. Many Texans may now be left without healthcare, including many who need it most, such as disabled and chronically ill people, new parents, and trans* people.

Early in March, the Alabama Senate voted to ban healthcare for trans* teens and young adults. Mississippi is considering a similar bill. So is Montana. They want to put healthcare workers who provide transition healthcare in jail for up to ten years. In most cases, transition healthcare for trans* teens is nothing more than puberty blocking medicine. The exact same medication is given to cis children who begin puberty too early. Reactionary propaganda often claims that teenagers are too immature to know themselves and to exercise bodily autonomy, but this is the exact opposite of the truth. Modern transition healthcare protocols are designed to give trans* teens the time and opportunity to explore their identity and determine what they need their bodies to be like. This is important because the effects of puberty are irreversible, and treatments to address having gone through the wrong one (such as facial hair removal and surgeries) are expensive, painful, and can be risky. Once trans* teens have determined, with their doctors and families, that they need medical transition, they can be given hormone therapy at the age when it is most effective.

The new assaults on trans* bodily autonomy are not only an attempt to legislate trans* people out of existence (even though trans* people would actually still exist anyway), but are, as trans* celebrity Laverne Cox passionately declared, objectifying and dehumanizing. The “bathroom bills” of recent years and the new bans on trans* participation in sports are clear attempts to keep trans* people out of public life. Being denied transition healthcare as a teen can make trans* people more visibly trans* even if they don’t want to be. This brings increased risk of discrimination and violence, and makes it easier for reactionaries to target trans* people. This danger is highlighted by the new bill passed by the Arkansas legislature that allows doctors and EMTs to deny even emergency medical care to trans* people.

Human Rights As A Wedge Issue

It is no coincidence that so many states are pushing anti-trans* bills and anti-abortion bills at the same time. They are funded by far-right political organizations that take donations from the billionaire class and direct them to these attacks against our diverse proletariat. These highly political and unscientific healthcare laws cage the human rights of women and trans* people, and they also serve to occupy and divide the working class. They force us to spend significant effort fighting yet another attack while across the United States (and the world) workers continue to be overworked, underpaid, and for the past year often exposed to a potentially deadly virus with insufficient protection. The common image of the American worker is a white cis man in a factory, but often the American worker is a Black man driving a bus, a trans* woman ringing up groceries at the store, or an undocumented person picking crops in a field. An attack on any of us is an attack on all of us, and, as history shows, the forces of capital and conservative politics don’t stop at the margins. Now more than ever, the proletariat needs solidarity and collective action.