Statues Fall and People Rise: Juneteenth Protests Across the U.S.

Friday saw large-scale protests across the United States. These protests were joined by the interventions of labor unions and activists of other movements, who are beginning to connect the struggles against anti-Black police violence with struggles in the workplace. 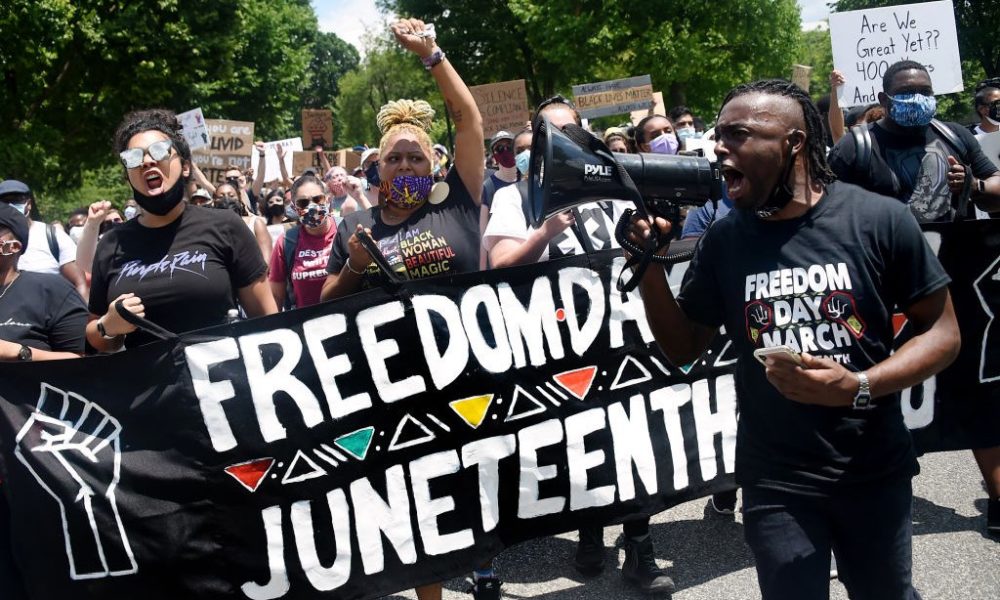 Friday, June 19th, was a key day for the current uprisings against anti-Black police violence. It’s been three weeks. One might imagine that people are getting tired of protests every day, but on Juneteenth an explosion of protests occurred around the country.

Juneteenth, is a holiday commemorating the end of slavery—when enslaved people in Texas, the westernmost Confederate territory, were freed. It has been a holiday largely celebrated by the Black community and sectors of the left, but this year was different. It may have been the largest day of protests across the country. In addition, Friday also saw the largest intervention of the labor movement yet. Across the country, increasing numbers of people are beginning to connect seemingly disparate struggles with the current struggle, recognizing the connectedness of struggle under the racist capitalist system.

In New York City, over 40 actions took place, including a car caravan by 32BJ of essential workers for Black Lives and an action at an Amazon warehouse. Over 6,000 protesters took the Brooklyn Bridge while across the city, vigils were held for murdered Black women.

On the West Coast, dockworkers organized with the ILWU to shut down ports for a day of action. The most dynamic of these took place at the port of Oakland. Thousands gathered there to march in solidarity and listen to speeches from, among others, Angela Davis. The shutdown of the ports was the largest labor action in support of the movement to date. In her speech, Davis noted the significance of the labor action and called upon other unions to join the movement. Another powerful speech came from artist and activist Boots Riley who said, “What is our power? That’s what today is answering. Our power comes from the fact that we create the wealth. Wealth is power. We have the ability to withhold that power. We have the ability to withhold our labor, and shut shit down. ” Riley also called for a strike until the movement’s demands are met.

Thousands of anti-racist dockworkers have shut down a port in Oakland as workers with the International Longshore and Warehouse Union went on strike at 29 ports along the West Coast of the United States to protest against racist police violence and exploitation. ⁠ pic.twitter.com/pljIAyGy8S

Protests were not just limited to major coastal cities, however. In North Carolina, protesters gathered to protest anti-Black racism and pulled down two Confederate statues. For years, activists in North Carolina have been pressuring elected leaders to take the statues down, and, for years, the politicians have either refused or delayed taking any action. The symbolism of protesters doing what politicians have been unwilling to do is clear.

Two statues on a Confederate monument on North Carolina’s State Capitol grounds were toppled by protesters, as Confederate statues and monuments have been removed across the country amid widespread protests. https://t.co/ZSGrz95aGF pic.twitter.com/2URshgZDOr

In Atlanta, thousands mobilized across the city. Tensions remained high as police officers continued their sickout, in protest of the charges against the two officers who killed Rayshard Brooks. This sickout is severely decreasing the amount of police on shift. For example, on Friday, in one of the city’s zones, every police officer except the supervisors called out sick. At a protest on Friday outside of the Wendy’s where Brooks was killed, a driver who was angry that protesters were blocking the road took out an AR-15 and aimed it at protesters. The situation escalated as a protester also drew a firearm and gunfire was exchanged, leading to a protester being injured. At this time, only the protester has been detained.

Washington, DC, was also the site of several large actions, including a march on the Department of Education. At that march, the chant was “1, 2, 3, 4, Black Kids Deserve More,” connecting the struggle for equity in education with the fight against racist police violence. Protesters also toppled and burned the only Confederate statue in DC. Many groups participated in organizing and leading marches and actions throughout the day, including the DSA and climate activists who carried a banner that said “Climate Lives for Black Lives.” At that same march, banners and chants also declared a solidarity between organized labor and the Black Lives Matter movement.

Other cities held massive protests. In Tusla, several thousand people gathered to protest anti-Black police violence as well as Trump’s racist rally that will be held there on Saturday. Tulsa’s Greenwood district was the site of the worst racist massacres, in 1921, when as many as 300 Black Americans were killed. In Minneapolis, there was a reparations rally in front of the State Capitol. In Philadelphia, protesters organized a silent march.

As a whole, these protests around the country show us two things: first that the protests are showing no signs of stopping, even as more and more concessions are being given to protesters. And second that more and more people are making connections between the struggle against anti-Black state violence and other struggles. This can be seen in the labor actions of the ILWU, the UAW, and the SEIU, as well as the presence of a wide spectrum of activist groups. People are starting to realize that climate organizing overlaps with anti-racist organizing, and they both overlap with labor organizing. People in the streets are demonstrating that Black lives are not valued at work, as well as in the streets. That the first community to suffer the effects of climate change will be the Black community and the global South around the world. The merging of these struggles is an important development that will deepen and strengthen the movement. The next step in developing these struggles is to link them all back to the struggle against capitalism.