As the Democrats and Republicans play politics with the stimulus bill, it is becoming clear that the working class will probably not receive a second stimulus check. In response, the hashtag #StimulusOrStrike is now trending on Twitter. 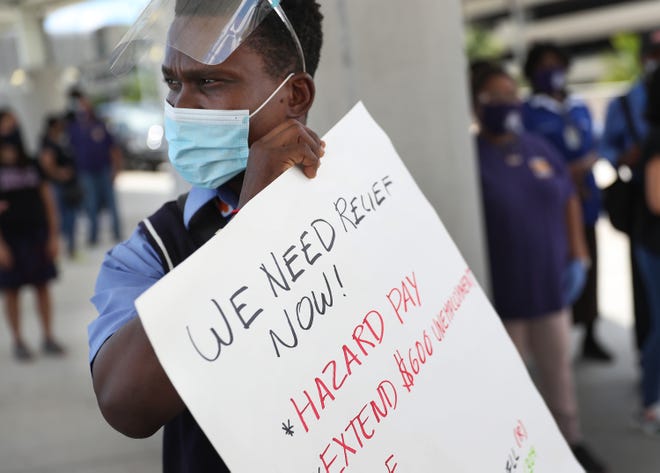 It has been more than 260 days since Congress last gave us stimulus checks. That’s 260 days of a deadly pandemic, a historic economic crisis, and ravaging unemployment. And through all of this, Congress has not given us another stimulus check, seemingly expecting the measly $1,200 check they gave to many — but not college students, immigrants, or those who were in debt to the government — back in March to tide people over as we approach the 10th month of the pandemic. This first stimulus comes out to about $4.62 cents a day since it was first passed.

A new relief bill is trying to make its way through Congress, but it is even more toothless and insufficient than the CARES Act from back in March. The exact details are still being sorted out as partisan squabbling continues to delay the proposal. The Republicans are pushing for liability protections for bosses that would exempt them from responsibility if their workers contract Covid-19 on the job; however, it seems as if that may be a bargaining chip that Mitch McConnell and others will give up in return for lowering the amount of aid given to the states. Some Democrats are proposing that a second stimulus check be issued, but that also seems to be a bargaining chip. As everything stands, it seems very unlikely that the final bill will include both unemployment extensions and a second stimulus check. If a bill does not pass before the end of the year, then all protections enacted earlier in 2020 — such as the eviction moratorium and an extension of unemployment insurance — will expire on January 1. That would be disastrous for millions of workers across the country.

The Democrats portray themselves as friends of the working class against the almost cartoonishly malicious Republicans. While it is true that Nancy Pelosi and the other members of the Congressional Democratic caucus are fighting back on things such as the liability protections, we should not be bamboozled: they are anything but our friends. Since negotiations have started, they’ve conceded away $2 billion of their already milquetoast demands.

The stimulus plan the Democrats just passed in the House provides only $300 a week in extra unemployment payments, a drop in the bucket for the millions of people currently out of work. And let us not forget that the Democratic governor of New York is currently keeping the public schools and non-essential businesses open. The Democrats are asking us to die in our workplaces or live off crumbs.

Meanwhile, President-elect Joe Biden has said that one of his top priorities will be opening schools by the end of his first 100 days. That means that by the end of April, Biden hopes to get students, teachers, and other school workers back inside of buildings. This is irresponsible to the highest degree, as it is highly unlikely a vaccine will have been distributed widely enough by then to gather safely together, inside again, in large groups.

At every turn, the ruling class has shown its total disinterest in helping the most vulnerable people survive this crisis. As the United States passes the record for COVID deaths in one day, and one in three Americans live in areas with no ICU beds, schools, gyms, restaurants, and countless other businesses remain open in many states. The message is clear: the capitalists and their politicians have decided there is an amount of working-class death they are willing to accept as long as they continue to make money. While they may have accepted this, we cannot.

The current moment is, quite literally, one of life and death for millions of working-class people. As both the Democrats and Republicans play politics with our lives, we need to seize upon our power as workers and shut down the economy until we get what we need from the capitalists to survive. We should hit them where it hurts: their profits.

We could see some workers beginning to realize this as the hashtag #StimulusOrStrike trended on Twitter. As the debates around the stimulus drag on, workers should organize in their workplaces and demand that their union leaders move to call a strike. These worker actions will be key to ensuring that Congress passes unemployment extensions and a second stimulus check. The only way to resolve this pandemic safely is to close non-essential sectors of the economy and have the government pay people to stay home. Worker deaths must no longer be be the cost of doing business for the capitalists in this pandemic. Workers should use their massive strategic power to ensure a stimulus bill that truly helps the working class.