Solidarity with Stop and Shop workers who are on strike.

Five days into one of the largest private sector strikes in decades, the workers of Stop & Shop show little sign of quitting. And why should they? The owners of the grocery chain brought in $2 billion dollars for their shareholders and then have the gall to propose a contract with deep cuts in wages and benefits.

One Stop and Shop worker said, “We are fighting for better health care. They want to raise our health care pay to three times the amount it is now. They want to take away Sunday overtime pay, they don’t want to contribute to our pension and so we are out here fighting for what’s right… I have been working for Stop and Shop for 18 years and helped them make over 2 billion dollars last year. And how much money are they giving me? Zero!”

On February 23rd, a three year contract between Stop & Shop and over 31,000 workers represented by the United Food and Commercial Workers International Union expired. Five locals representing the union in Massachusetts, Rhode Island and Connecticut voted by large margins to authorize a strike. By that time, it was clear that the company would continue to demand egregious concessions from the workers in the new contract. These attacks include the elimination of the holiday and Sunday time-and-a-half pay that many workers rely on because of their low base-pay, in addition to raising healthcare premiums, replacing pensions with 401k, reducing sick days and vacation time and automating work to reduce the workforce by half in the coming years. All of this is added to the company’s ongoing goal to replace full-time workers with machines or part-time, more precarious workers. Stop & Shop has launched a full-scale onslaught against tens of thousands of workers who serve the community day in and day out, stocking shelves, ringing up and bagging groceries, baking and butchering, and in so many other ways feeding New England.

Nearly 250 stores—or around 21% of the grocery industry in the region—are struck, and the pickets have been successful in closing many of these stores early or preventing some of them from opening at all. Those still open are barely functioning with managers working and only the self-service lines open. Scab labor has not played a big factor in the strikes yet but some workers have reported seeing scabs crossing the picket line.

In Connecticut, the Executive Board of  UNITE HERE 217 has resolved to support the strike and many hotel workers have been at pickets in Stamford and New Haven daily (see the resolution below). Taking a play from the Hotel Trades Council in NYC during the 2016 Verizon strike, hotel workers in Connecticut are ready to fight if scabs are put up in Connecticut hotels. Teamsters throughout the region have refused to move goods to the struck stores and many picket lines have the full display of union shirts from many different locals. Public support appears high as the constant cacophony of car horns attest and many would-be customers turn their cars around. This display of support is not surprising given the connections between many long-time workers and the community.

To win, however, the strike must expand in breadth and depth. More unions need to support the picket lines—not just through resolutions, but by mobilizing their membership out to the lines. When the scab operation builds up, strong lines are even more important to keep scabs out. Strikers should partner with the nonunion workers of other Stop & Shop stores because only one fully unionized chain is not enough to keep up the fight. Furthermore, at many stores there are only a handful of shop stewards making decisions; these groups should expand to form a larger strike committee that brings more of the ranks out to the picket lines and into assemblies to decide next steps.

A potential obstacle to the continuing strike is that the union leadership has been using xenophobic appeals to rally workers against Ahold Delhaize—the Dutch multinational that owns Stop & Shop—as if an American corporation would somehow be better than one headquartered in Zaandam. This sentiment must be combatted. Immigrant workers make up a large section of the grocery workforce, and so there is an opportunity for the Stop & Shop ranks to build even greater solidarity alongside immigrant communities. It goes without saying that there should be communication with the European workers of Ahold too.

Another possible pitfall is that the negotiating team may buckle in the fight for part-time workers in order to achieve the demands of full-time workers. Stop & Shop workers must avoid this tactic during bargaining. Any move towards a tiered system will pit workers against each other and weaken the entire negotiation. All workers deserve the same rights and benefits.

The growing strike wave of the past 18 months will not end with Stop & Shop but will continue and gain momentum. All New England workers must support the Stop & Shop strike! 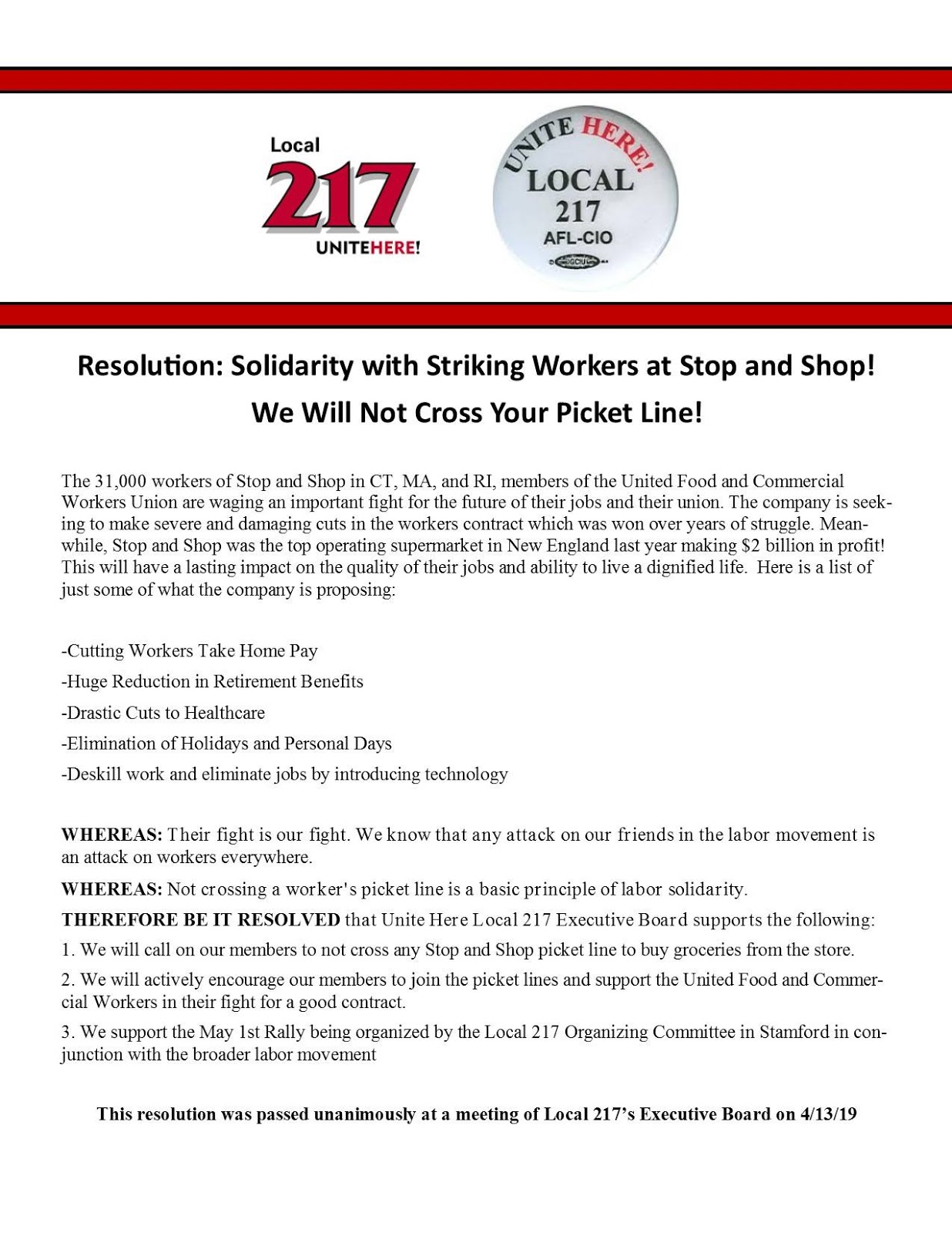