This Wednesday at 8am, workers at the Charité – Berlin’s biggest hospital with over 13,000 employees – are going on strike. They are fighting against poverty wages and outsourcing. International solidarity is needed! 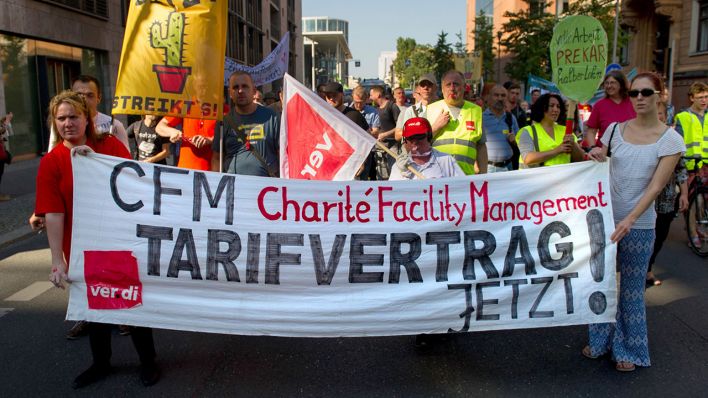 Operations will be cancelled. Transports will be delayed for hours. The toilets will get filthier by the day. Yes, a hospital is going in strike.

The Charité, Berlin’s university hospital, belongs to the city’s public sector. But the service workers aren’t employed directly by the Charité. They work for a subsidiary called the Charité Facility Management (CFM). The CFM belongs to the hospital (51%) and to a consortium of service corporations (49%).

CFM workers aren’t covered by the collective bargaining agreement for the hospital. So these workers – in cleaning, security, transport, sterilization, maintenance, catering etc. – earn poverty wages, usually just above minimum wage. In addition, their contracts are often limited to one year.

The CFM was founded in 2006 as part of a massive cuts to wages in Berlin’s public sector. In 2011, CFM workers waged a heroic, 13-week strike demanding equal pay for equal work. But the leadership of their trade union, ver.di, ended the strike in exchange for empty promises. Nothing has changed. Crucially, ver.di had sabotaged the chance to have the service workers strike together with the Charité’s nurses.

Now, the CFM workers are relaunching their struggle for the principle: One company, one workforce, one collective bargaining agreement. Just about every public company in Berlin has its own low-wage subsidiary. So there are plenty of other workers to link up with.

The workers from Berlin’s Botanical Garden have proven that outsourcing can be beaten. Previously, some workers earned 40% less than others because they were employed by a wholly-owned subsidiary (also founded in 2006). But after a number of strikes, last December management agreed to pay the entire workforce equally. Six months later came the announcement that the subsidiary would be dissolved. Of course: What good is a subsidiary if it doesn’t pay significantly lower wages?

Unfortunately, ver.di is blocking attempts to link these different struggles. For example at Vivantes, Berlin’s second biggest hospital, there is an almost identical situation with its own service subsidiary, the VSG. For years, CFM and VSG workers have been clamoring for a joint strike, to pressure both hospitals at once. But the ver.di bureaucracy has refused to organize such an action, with no explanation.

The CFM strikers are already being attacked by the bourgeois press because they are supposedly endangering the safety of patients. But the exact opposite is the case: Budget cuts and lack of personell are putting people’s lives in danger. In the last five years, at least 150 people have died from “superbugs” that spread in Berlin’s hospitals because there is not enough money for hygiene.

The party Die Linke (The Left) sometimes speaks out against outsourcing, low wages and and precarious work. But Die Linke was in the Berlin government in 2006 when the CFM was created. Now they are in government again. Their only proposal for the workers is to wait for a hospital reform in 2019. But workers in poverty don’t have the same patience as highly-paid “left-wing” government ministers.

That’s why this strike needs our solidarity. Healthcare workers in New York City
have sent their greetings to their CFM colleagues. This is a great start! Trotskyists in Berlin, organized around the digital newspaper Klasse Gegen Klasse, will be doing everything to mobilize students and workers to support the CFM. Because this is a strike in the interest of every wage earner!